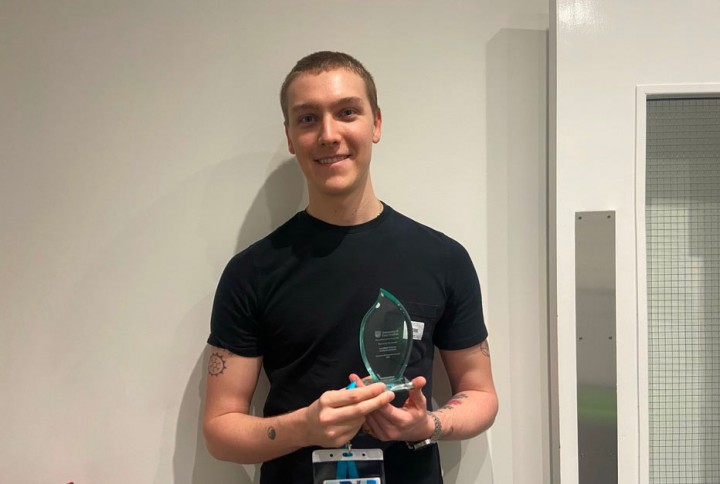 Congratulations to our BA Creative Musicianship alumnus Cameron Brogan Higgins who was named as the winner of the Rising Star Award by the University of East London (UEL).

The song, which Wonderland Magazine described as "the only track you should be listening to ... when you do hit the dance floor", features a futuristic music video filmed in the deserts of the United Arab Emirates. The video was directed by Cameron's friend, Sergie Fiddes.

Commenting, Cameron said: "I have always loved pairing visual aesthetics with music. During my time at ICMP, I programmed holograms and demonstrated them during my Live Music Technology class with my tutor Marcello Ruggiu."

"I was very taken aback that I won the award and was very happy and surprised when they read out my name. I did not think I was going to win."

It was actually my first award ever. I am very grateful and could not have done it without taking the Creative Musicianship degree and receiving the creative education I did from ICMP."

Marcello added: "Cameron was one of my students at ICMP for the creative Live Technologies Module."

"He always demonstrated a forward thinking attitude and when he delivered his assessment, he managed to put in place a little nice show that demonstrated his creative approach and ability not only as a dancer but also as a creative music performer, I am really proud of his achievements!"

Well done to Cameron! You can watch the brilliant video to his track, 'Stereo Passion', and look out for an interview on his songwriting and work with visual media.

Up until 2021, our undergraduate and postgraduate degree courses have been validated by UEL.

Following the granting of Degree Awarding Powers, ICMP now takes full responsibility for the academic integrity and standards of its programmes. This achievement demonstrates the quality of our programmes and offering and why there has never been a better time to join us.