In the third and final part of our interview with ICMP guitar tutor Charlotte, she talks about her new career in education... 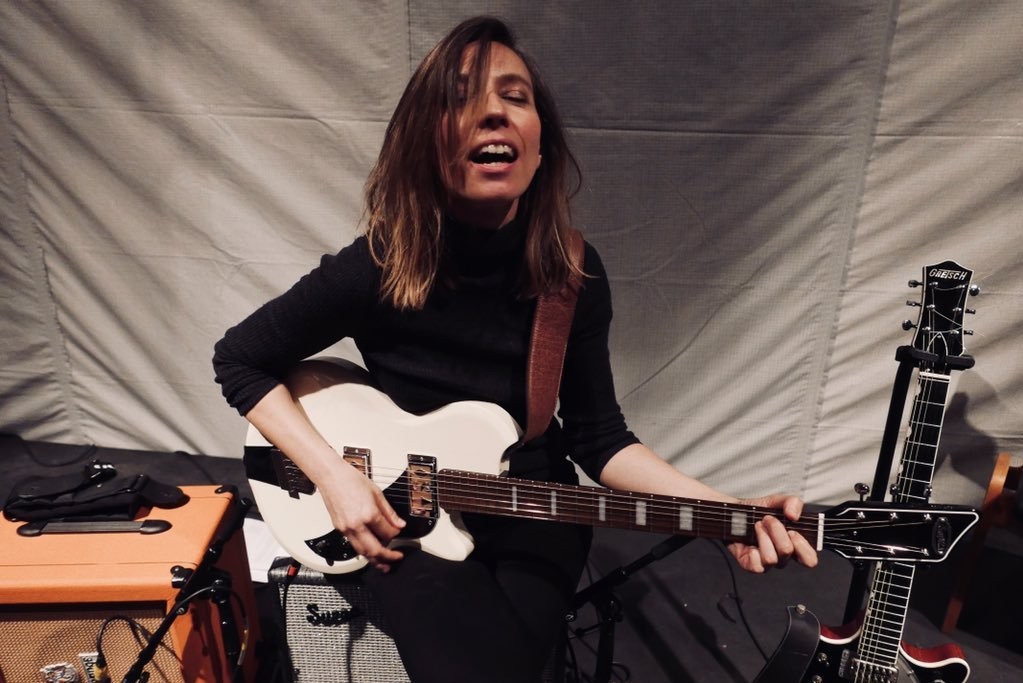 Following on from part two of our interview with Charlotte where she discussed finding her feet as a solo artist and musical director, we now move on to learn about how she found her way into music education.

This year you also joined ICMP. How did you hear about this opportunity?
I was playing with Birdy and we did a gig at Somerset House for which we had a string section. Audrey Riley, a member of the ICMP faculty, was the string arranger. Once I got introduced to her, we started talking and I told her I wanted to get into film-composing lessons, which she teaches. I then had some private lessons with Audrey and, as time went on, she asked me to cover some of her ICMP songwriting lessons.

After a while, BMus Popular Music Performance Programme Leader Ben Jones asked me to join one of his performance classes. And that's essentially what I'm doing now! I had previously undertaken some mentoring and private guitar tuition - mostly with young girls - so I guess the idea was always there. Even as a solo artist, putting a band together and showing them how to play my songs has been such a fundamental part of my career. That translates really easily into doing performance workshops. I just really enjoy the musical directing element of watching students play and trying to help them be better.

A post shared by Charlotte Hatherley (@charlottehatherley) on Dec 2, 2015 at 3:25am PST

How are you finding it? How’s this experience going so far?
It's great! I got some first-day-at-school feelings because even though I've done masterclasses and guesting, I'm only now really getting into it a lot deeper. It's been a few weeks but I think I'm getting to grips with it and just really loving the energy. I like to be surrounded by students, whether it's in class or sat in the corridors playing guitars and singing at the piano. It's a really creative, loving atmosphere.

Based on your personal experience in the music industry, what is the best piece of advice you could give to our female students?
I've seen a lot of really great guitar players so far at ICMP. But one thing that still strikes me is how female guitar players seem to have less confidence than the boys. They're less inclined to get up and play in front of people, and I don't know why that would be.

There are definitely more female musicians now than when I started and I believe that this visibility is really important. At the same time, I can see that there are still self-confidence issues for girls and I would love to try and help tackle them.

I definitely got more work as a session musician because I was a girl. Of course, the aesthetic thing does come into it a lot - for the Bryan Ferry gig being a woman was crucial as that was what he wanted - however, the majority of the recent gigs I've done I was hired for because it was a female-fronted band who wanted other women to join. This also meant they would not be the only girl on tour. With Bat for Lashes, there were three of us in the band, together with a female tour manager, female merch girl and female monitor engineer. I kind of despise the early phase of my career, when I was the only girl on the tour bus. But in the last 10 years, I've been around more women than men. Having women playing in bands is actually really important; it creates a completely different dynamic, especially when traveling on a tour bus.

I think now is an incredibly good time to be a female musician. There's a general awareness of leveling the playing field, which results in people wanting to specifically work with female session musicians, songwriters, engineers and composers."

Of course, I don't agree that girls can't play guitar as well as boys - that's obviously ridiculous! The few female guitarists that I have taught and worked with have a really unique style. Sometimes girls have a more self-taught approach to playing the guitar and maybe that's because of their self-confidence. They tend to avoid private tuition or teachers, instead they stay at home and develop their own style, which ends up being very distinctive! And that's the same for female bass players too.

I really want to try to encourage this revolution to keep happening! Being an MD, I'm in the position of putting bands together and in order to do so I've built up a list of amazing female musicians that I've worked with. I've already seen a lot of talented female guitar players here, which is really encouraging!

We'd like to thank Charlotte for kindly offering us her valuable time to provide such an insightful and aspirational interview.

We hope you've found it as inspiring as we have!  Part one | Part two

by Lara Magnelli
November 14, 2019
Creators
Back to Blog Home