Plastic Barricades: "Don't be afraid of arguments when writing music..." 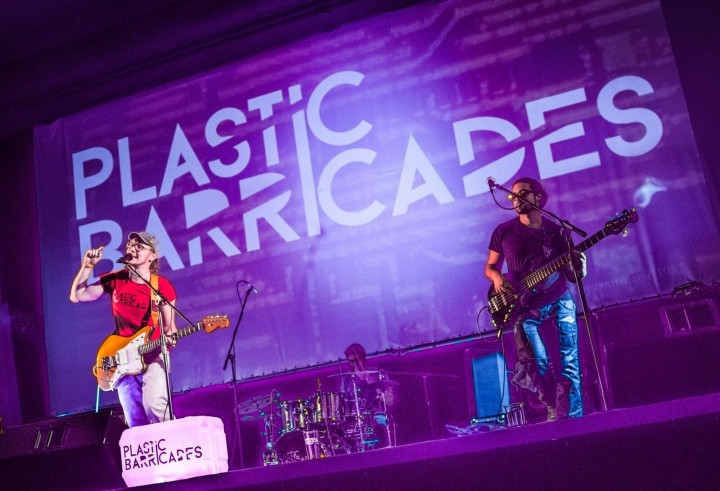 Romantic and honest, melodic yet melancholy, it's hard to pin down the ambitious alternative rock sound of London group Plastic Barricades.

But this eclecticism is part of their charm, with the band catching plenty of attention in and around the UK capital with three years of gigging and writing.

The outfit, which features our alumna Daniele Borgato (BMUS Bass) and Frazer Webster (BMUS Drums), have been hard at work perfecting their sonics, and are about to launch their debut LP, ‘Mechanics of Life’.  The record is, as the band describe, a musical 'chronicle of life in the troubled yet fascinating XXI century' and shows off their dizzying array of talents in fine style.

Ahead of its release, we caught up with the band to learn why they believe creative differences should be embraced to ensure greater heights of musical invention...

Who or what first inspired you to want to make music?

Dan: I started studying piano and classical guitar at a music school when I was six. Several years later my parents started giving me pocket money for school lunches. I always thought food was overrated, so I saved this money to buy cassettes. My first cassette purchase at the age of 11 was based on pretty artwork and some vague mentions I'd heard on MTV. It happened to be Nirvana's best of and it changed my life forever.

Frazer: I'm not sure really, I just really wanted to play piano when I was three and my parents got me a cheap Casio keyboard and I never looked back.

Daniele: Many different bands, but definitely Led Zeppelin, if I have to name one!

Who were your early influences?

Dan: I was heavily into Nirvana and the grunge scene as a teenager, later I fell madly in love with Oasis, Coldplay, Muse, Razorlight, Biffy Clyro and other British bands of the early noughties.

Frazer: Listening to music on the radio with my mum in the car and MTV with my brothers.

How did Plastic Barricades get together?

Dan: I just moved to London and was scouting for musicians all around the place. Several responded to my Gumtree ad, one of them was an ICMP student. We had a jam. The rest is history.

Have you a favourite place to write and record?

Dan: My favourite place to write and record is in my backyard, all guitars, keyboards and vocals for our upcoming album were done in my shed in a very DIY kind of fashion. Sometimes it gets lonely in there, but I do have a family of very musically inclined spiders with me. Their input into the album is hard to overlook.

'Mechanics of Life’ is your forthcoming album - could you explain how the record came about? And what subjects does the record tackle?

Daniele: We realised that people come without an instruction manual, so we decided to make one!

Dan: It is our way of documenting the turbulent and fascinating times we live in. 'Mechanics of Life' is about saving the planet, pharmaceutical conspiracies, artificial intelligence, the search for love and meaning, mental health, taking control of your life and becoming a better individual and so on. I did enjoy exploring and researching these topics, to the point where Google started being really worried about me, offering me the Samaritans hotline phone number on a daily basis.

Both Daniele and Frazer are ICMP alumni - how did your experiences at the college help prepare you for the music industry?

Frazer: I think the most important aspect of studying at ICMP is being surrounded by lots of other talented and hungry people who share your interests. You can learn an instrument by yourself if you're willing but you can't get that kind of experience any other way that I know of.

Frazer: Be aware that your instrument won't be the only thing you're going to learn about and be prepared to be taken out of your comfort zone in that sense. As much as you can, make friends and connections with other people you enjoy playing music with and strive to keep in touch. Also competition with your fellow musician can be a healthy thing if you do it right, but everyone has their own style so figure out where you want to be musically and try and head in that direction.

Have you got any tips on beating writer's block?

Dan: This is a tough one. My main advice would be simple - experience life, learn to look deep into things, absorb. Also try to keep in touch with real people, don't lock yourself in your basement until you come up with a hit song. Let it go - and it will naturally come back to you.

Frazer: I would say as far as drums are concerned, if you're writing with other musicians try to follow their intentions but guide them with structure and feel. Being a drummer gives you a unique view on the music as your head is free from harmony. You have a better perspective on the bigger picture and sometimes not being in the harmonic spectrum can be a great thing.

Daniele: I am not a big writer, but definitely my advice is this: save whatever you are writing even if it looks or sounds stupid at the moment. Judge later, most of the time it's just our mind tricking us.

Dan: Our debut album ‘Mechanics of Life’ is out worldwide now. And we are starting our UK tour at the same time so autumn is looking stunning so far! Check our live dates and pop in for a though-provoking conversation. Our album launch party is happening on Saturday 16th September at Proud Camden!

Have you any advice for new bands and emerging artists?

Frazer: Some people think that music and writing music should be all fun and it is sometimes but you will probably argue with people and times can get difficult but don't be afraid of them, it's a creative endeavour and everyone has their own way of thinking. Other than that, just work as a team and treat those around you with respect and above all ...  ALWAYS bring more equipment than you need to every single gig ... trust me.

Daniele: Don't be afraid to be yourselves, or express what you truly are, find a way to put that in your music.

Dan: Just keep going. It is hard. But it is worth it. You have something that is truly yours and no one can take that away from you. Cherish that. And share it with the world. It is ready to listen!

If you’re looking to take your playing and performing to the next level like certain members of the band, then why not join us here at ICMP?