AIM, the UK's independent record label trade association, currently has over 800 members - from independent labels, self-releasing artists through to distributors. If you aspire to carve out a career in the music industry then you will undoubtedly cross paths with AIM. 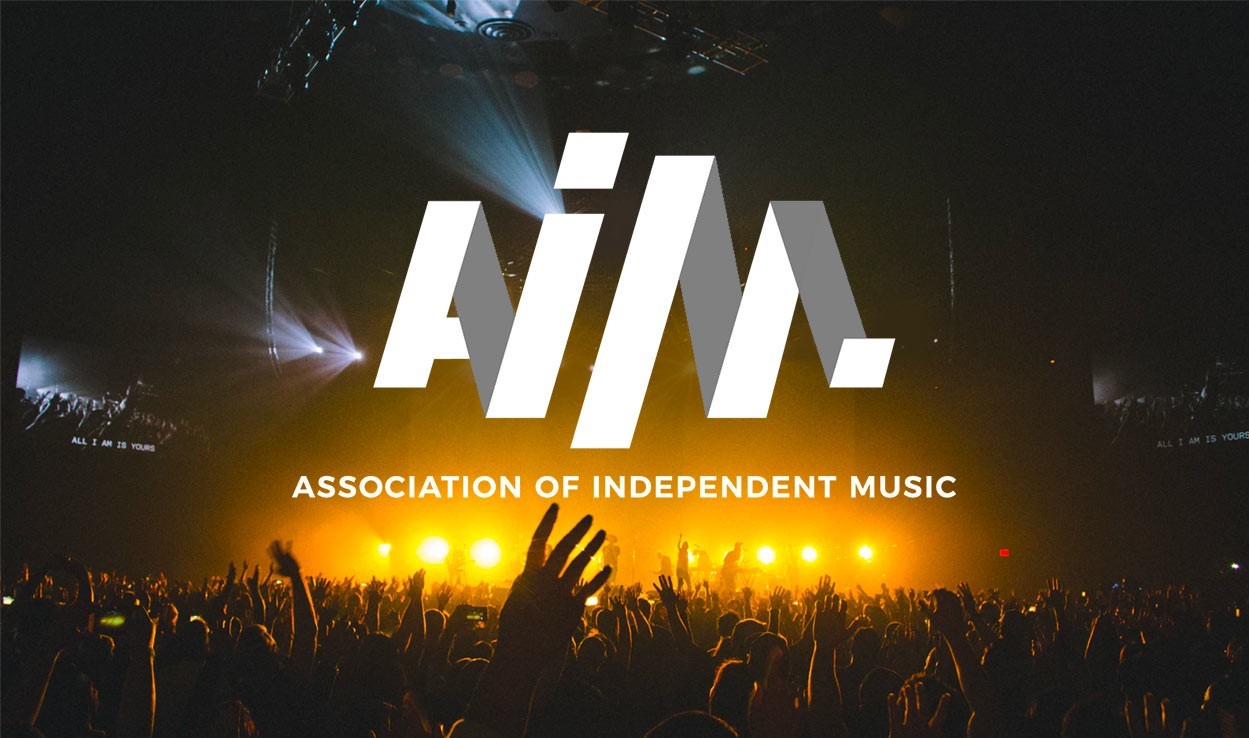 Continuing our series on music industry trade associations, we are looking at the trade body representing independent music companies in the UK, the Association of Independent Music (AIM). Currently in its 21st year, in this piece we are taking a look at a number of current AIM initiatives on behalf of its membership, the annual AIM Music Awards and our own valuable ICMP/AIM connection.

AIM is the UK independent record label trade association and currently has over 800 members including independent record labels, self-releasing artists and distributors. The organisation was founded in 1998 to promote the independent music sector, which today boasts a UK market share of around 25%. With its share of the streaming market growing and a record of 1.3 million albums sold in 2018 being from independent labels, 2019 is promising further growth for AIM and independents. 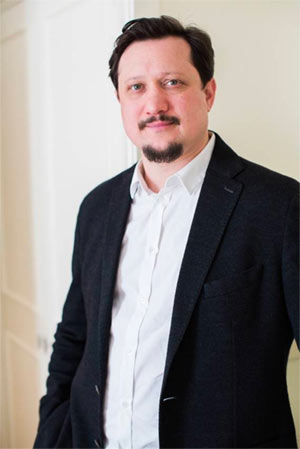 AIM is led by CEO Paul Pacifico, who took up the position in November 2016. Paul was previously at the Featured Artists Coalition (FAC) and President of the International Artist Organisation (IAO). He was a founder member of The AllStars Collective, an ensemble made up of 40 of the world’s top session musicians.

As a trade body, the job of AIM is to promote its members interests and help them develop their business by providing a range of services, commercial opportunities and practical help to empower its membership and enable them to innovate, grow and break into new markets.

A recent example of this being the publication of the ‘Start-up Guide to Music Business’, a how-to handbook on starting and growing a business releasing music independently. Other recent initiatives by AIM include preparation advice in the light of Brexit and a report on Digital Distribution - launched in conjunction with music industry research and media company CMU. Details on all of these can be found on the AIM website.

Climate change, diversity and gender balance are other issues that AIM has engaged in on behalf of their membership.  The AIM Climate Action Group was formed recently, with the objective of helping members reduce their carbon footprint and increase sustainability. AIM have also been a prominent voice on the topic of equality and gender in the music industry. They sponsor the Women In Music Awards and in 2019 Gee Davy, AIM Head of Legal & Business Affairs, was inducted into the WM Music Roll of Honour.

As well as taking care of the independent label sector, AIM is also involved in training and music business education through its wide-ranging AIM Academy initiative. In July this year, ICMP and AIM announced a partnership together providing a new Music Business Entrepreneurship scholarship “to develop the skills and potential” needed for success in music business. The scholarship is designed specifically to help those who have a driving interest in the music business and in September this year Shyann Headley at the college, became the first recipient of the ICMP/AIM scholarship. 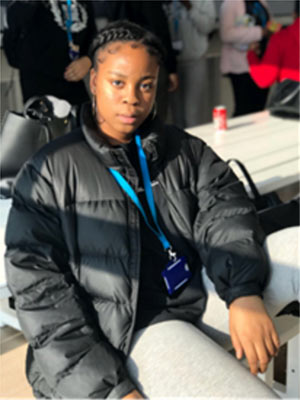 We spoke to Shyann about her AIM/ICMP scholarship and how she was finding learning about the music business...

How did you first hear of the AIM scholarship at ICMP?

I found out about the scholarship through my social worker. Whilst applying she advised me to look at the website and see if ICMP has any scholarships or grants that would really help me now and in the future.

What are your hopes and ambitions for the Music Business Entrepreneurship course?

Within my course I would like to learn as much as possible. My brain is kind of like a sponge, I like to learn and take on new knowledge. Another thing I'll be taken on within this course is what I'm really good at to basically make a career out of it. By learning and acceding I can see what's missing within the music market and hopefully try to fill that gap as best as I can.

How’s the course and your college experience going so far?

The course is amazing! The experience is amazing! All of my lecturers are helping guide me to what I want to do; which I love. ICMP has a real homey vibe to it that's never made me feel uncomfortable or unhappy right from the beginning.

A recent initiative by AIM has been the setting up of regional hubs for the organization in the North of England, Northern Ireland and Scotland. In each of the three regions, AIM has appointed a regional Ambassador and a Champion, tasked with creating strong local networks among the independent music companies in their areas and providing support, expertise and access.

We recognise, particularly in the digital market, that talent can be based anywhere and can spring out of anywhere. What we want to do is recognise that there are areas of the country that are under-served in terms of structure, knowledge and resource... our hope is that by delivering additional support and reinforcing activities that are already going on locally, we can absolutely help take some of those businesses to the next level and foster growth for those businesses.”
Paul Pacifico, CEO AIM.

It is expected that more regions will be rolled out in due course and as part of the initiative, AIM will be partnering with local events such as Wide Days in Edinburgh, Unconference in Leeds and Output Belfast, while also bringing their own AIM Socials and AIM Academy days to all the regional hubs.

Funding, or rather the lack of it as far as small independent companies making up the association’s membership goes, has always been a major concern of the AIM agenda – questions as to raising finance, protecting and maintaining cashflow or just simply staying in business, are more or less semi-permanent topics on the agenda of independent music companies. 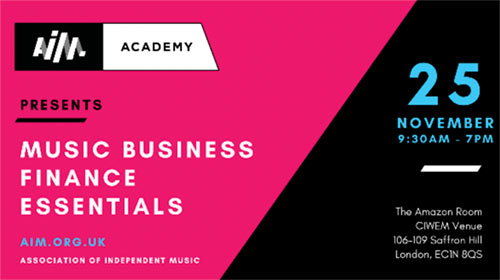 The latest AIM Music Business Finance Essentials workshop took place at the end of November in which attendees were given a grounding in music finance, lessons on how to avoid pitfalls at the early stages and how to raise money in order to take their company to the next level. Specific topics covered included an introduction to music business finance, investment, accounting, cashflow, royalties and revenue sources, with speakers from within the industry, Accountants and the Department of International Trade. 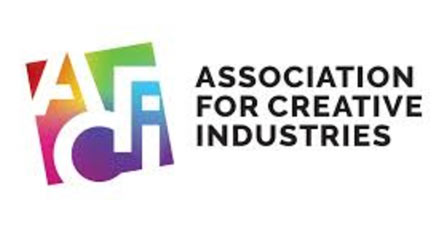 We have added our voice to the board of the Creative Industries Federation enabling the perspective of SMEs in Music to be heard in a much wider forum that extends our reach, whilst also giving us the benefit of connecting with and learning from many in other creative areas like fashion, games, design and architecture”.

To end with, at this year’s AIM Annual General Meeting held in October, it was announced that the membership had grown steadily through the previous 12 months and the organisation was very much set for an increase in activity and an uplift in positive member engagement. Setting the tone in his annual address to members, CEO Paul Pacifico reflected on the fact that:

“Our theme for this year’s AGM was knowledge and its relationship with truth and trust. We heard how this theme is reflected across society at large in climate action and journalism, and across the creative industries as a whole. We take very seriously AIM’s role as the heart of an essential network of trust and truth built on a platform of expert knowledge from within the team, our members, our friends and wider stakeholders.”

More details about AIM and how to join are available on aim.org.uk

by Julian Wall
November 21, 2019
Amplify your career
Back to Blog Home