Learn how prog metal act Haken started and their biggest inspirations in our new interview... 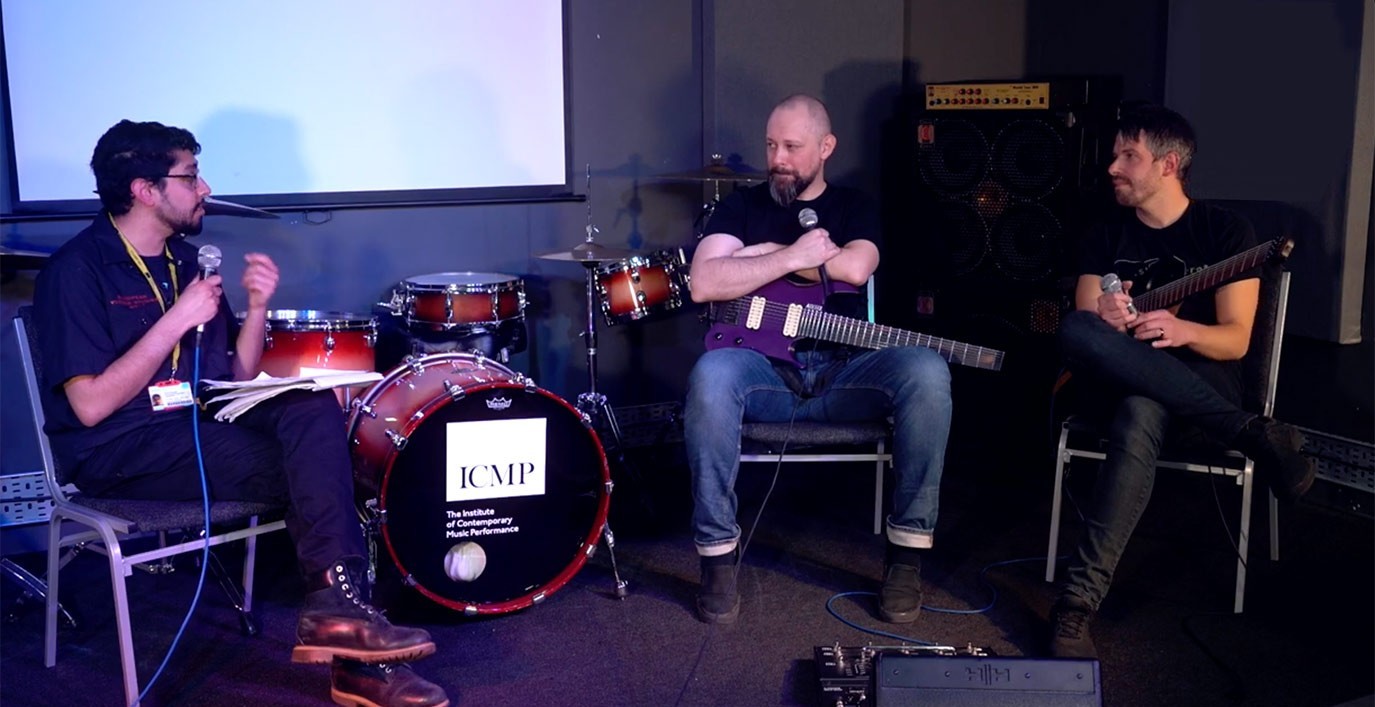 Charlie Griffiths and Richard Henshall are at the heart of the band's increasingly heavy sound, best heard on their most recent album 'Vector'. Full of epic musical brushstrokes, incredible technique and innovative song structures, the release has helped them push their music and the prog scene forward.

Our Student President Nick Gauntlett interviewed the duo when they visited ICMP for their recent guitar clinic. And it's not the first time Charlie has visited ICMP. When he's not on tour or writing, Charlie is also an ICMP guitar tutor. We learn how they started out in guitar music, their favourite players and more...

Charlie Griffiths (CG):  Like anybody my age, as a kid I was into Queen in a big way. I didn’t like music generally but I loved Queen, they were the only band I cared about. I wanted to sound like Brian May.

As I got older, I started taking music more seriously and joined various bands. I was in a band with Martin Goulding, another ICMP tutor who students here will know very well. We went to school together, eventually I ended up at The Guitar Institute back in the eighties and nineties. It's now this college ICMP. Until then I still considered it a hobby but I met Ian Scott. He was really influential as he was the first person who taught me that playing the guitar could be a job.

Richard Henshall (RH): My mum was a piano teacher  so I grew up listening to Chopin. I used to play piano a bit back in the day. I didn’t go to college to study music. Haken grew out of bedroom jams - [Haken vocalist] Ross Jennings and I grew up together, then we went on to study together. I ended up studying music production and Ross did film, then the band started from there once we had finished. .

How have you supported your music careers? Have you had other jobs?

CG: There’s no one day when you suddenly become a professional musician. So you have to earn money however you can.

I used to work in a lab processing blood tests. The hours were 9am until 2pm everyday, so I ‘d do that and earn money. Then from 2pm, I’d work on music, writing, practising, playing gigs and teaching."

You have to try a bit of everything and pick up money where-ever you can.

And that’s still true today. We're in Haken and it's getting bigger and bigger and with that comes income. But it’s still not at full time level, so you need to have your fingers in lots of pies. I write for magazines, do guitar clinics and lessons via Skype.

RH: I worked as a dinner lady for about two weeks! But it’s just one of many jobs I’ve had to do to try and sustain my music industry career. I worked in a music shop for a while. For seven years, I taught 5-11 years olds in school. We try to cram as much into our tours as possible - so there's plenty of clinics and teaching - but we’re still working at it and trying to make Haken a full time thing. We’re fortunate to be getting there slowly but surely…

So has there been a breakthrough moment for you?

RH: I still don’t think we’ve broken through. We do tours and people come and see us but we still come home and have to work. We play what we want to play and don’t compromise in terms of the music. We just try and enjoy ourselves and the music we play and I think progressive fans appreciate that.

CG: If we sat down and tried to write music we thought people would like, I think people can smell it a mile off. So we’ve succeeded because we haven’t compromised.

We’ve pleased ourselves and people have followed us. I think that's good advice. Don’t try and be popular, just do what you have to do and hopefully people will be into it."

How did ICMP help you become a better musician?

CG: I was a student at  ICMP which is now the Guitar Institute. It was hugely beneficial because at the time, it was the only way you could get any information. You couldn’t find info any other way as it was pre-internet.

But I remember it as a magical time. All under one roof we had the cream of the UK guitar scene, players likes Sean Baxter and Lee Hodgson. They were the best at what they did in the UK and you could go to school and have a lesson with them. They taught me everything I know about the guitar, the fretboard and my technique. It shaped who I am as a player for sure.

Which players do you look up to?

CG: I love Brian May. He’s been hugely influential. Just because I aspire to his aesthetic. I want to write a solo that’s part of the song, it's musical and I want people to sing along to it. Which is the coolest thing ever when it happens. And it has at lots of our recent gigs. We have the crowd singing along to the vocals, the solos and the riffs.

RH: For me, I grew up with Radiohead so I love the playing of their lead guitarist, Jonny Greenwood. I tried to use his sound design elements to the guitar. But I also love other players like John Petrucci and Guthrie Govan. His two books are incredible.

Who are your favourite non guitarist musicians?

RH: Tigran Hamasyan. He’s the ultimate epitomy of what a musician should be. He’s an Armenian jazz painist. He plays the piano almost like a guitarist. It’s all very syncopated. He has this natural affinity with harmony and rhythm. For me, he’s a real inspiration.

CG: The future? Well, we’re coming to an end of this tour cycle for the Vector album but we have a string of live dates in New Zealand and Australia, some European festivals. We'll probably start thinking about writing a follow up record soon too.

RH: We also have our biggest ever support slot, playing with Devin Townsend around Europe and the UK later this year. We're very excited about it. It will be the biggest thing we’ve ever done and we can't wait to support him but also watch him perform every night.

Are you a guitarist looking to push your skills and technique to the next level - then why not join us here at ICMP London? Benefit from our small class-sizes, regular industry guests and industry-standard facilities. Start your journey by finding the right guitar degree course for you, if you need any help our friendly Admissions team are available on 020 7328 0222. If you fancy visiting ICMP, we'd love to meet you at our next Open Day

by ICMP staff writer
May 16, 2019
Creators
Back to Blog Home