We quiz music producer and engineer Steph Marziano on how she's worked with everyone from Denai Moore to the Prodigy... 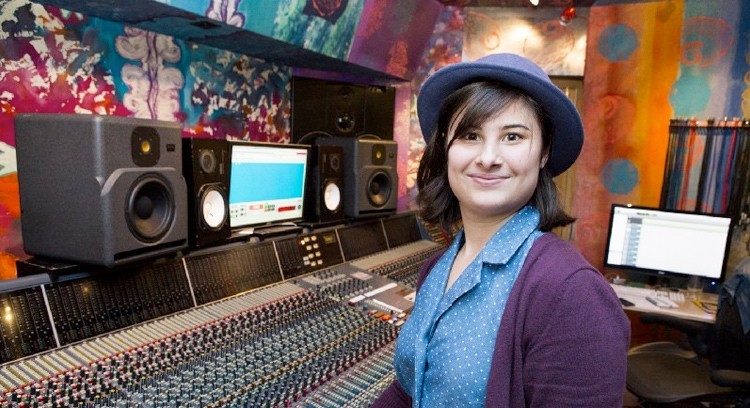 From our Songwriting graduate Denai Moore to FKA Twigs, production guru Steph Marziano has enjoyed stints in the studio with some of the best in the business.

Even if you're not heard her name before, Steph's list of work and credits is envious. Her hard work was rightly rewarded towards the end of 2017 with a nomination by the MPG Awards as breakthrough engineer of the year.

We caught up with Steph to learn more about her career to date, work with Denai and her top advice for new and aspiring music producers...

How did you first get into music and begin your journey into the industry?

I’ve always been obsessed with music. I wanted to play drums when I was 13 and actually made my parents a Powerpoint presentation about why they should buy me a drum kit. Luckily it worked! Neutral Milk Hotel’s 'Into the Aeroplane Over The Sea' was the first record that truly moved me in my young teens. I’d say I wouldn’t be where I am today without that record.

What led you to music production - could you explain how you entered this musical world?

I was writing my own songs and playing drums, when I started to get into recording them. I made a makeshift studio in my parent’s basement and recorded loads of pop punk bands!

How did you get the first gig in the studio?

I was lucky to score an internship in high school working for a great university in Philly that had a studio. The guys there taught me the basics and really inspired me.

After uni I got my first big studio job at Sarm studios. After my interview I must have called them each day asking to start work. They probably hated me!"

What is the role of the music producer when working with emerging artists and bands?

It’s pretty similar to any other band. Except there’s a bit more room for trial and error. A new band might be just developing their sound - so you have to go through that process with them. Although the producer might know that recording 400 vocal overdubs is too much, the band might not so you have to let them have that process and find out for themselves. That way they feel like they can try and have an idea without any judgement.

You've worked across a number of high profile projects - which has been the most creatively satisfying?

I’ve been fortunate to assist and engineer on some big records and have really loved every minute of them. I’m doing a lot of writing at the moment and finding that super satisfying.

You've also worked with an ICMP grad, Denai Moore - could you explain a little about you landed this role? And how was working with her?

I met Denai’s amazing A&R Jane Third on a session and we hit it off. She put Denai and I in a studio together and it was just magic. We instantly clicked. We still work together all the time and are always having fun creating mad sounds.

Have you a favourite piece of gear?

Tough question! I can’t live without my UAD plugins. But my absolutely favourite piece of gear right now is my Electron Digitakt Drum machine/Sampler. I use it on every writing/production session I have. I can store my own samples, and really get into the groove while creating beats. Most drum machines are rigid, yet this one lets you modify every hit making it feel played as opposed to programmed.

What's the best piece of advice you've received when it comes to music production?

Find that balance between being confident and humble (good life advice as well!)"

Many of our readers will be new producers and aspiring engineers - what would you advise them to do when beginning their careers?

When applying for assisting work never say you’re a producer. Studios don’t care. They want someone who is humble and ready to start from the ground up. If you go in saying that you’ve produced, and engineered, they won’t hire you to assist for them.

What does the future have in store for you when it comes to your musical projects?

I'm doing loads of writing at the moment! I'm really enjoying that. I’m also heading to Canada/the States to work with a few exciting projects. As you can see, I never want to leave the studio!

Listen to Denai Moore's 'Trickle' taken from her album, 'We Used To Bloom'.

If you're keen to follow your passion and carve out a career in music production or sound engineering, then why not join us here at ICMP? You'll learn in our state-of-the-art music production facilities, from some of the best tutors in the business, and also gain insight and advice from regular masterclass guests such as Andrew Scheps and Mark Ralph.