Judas: "New bands will make it by being true to themselves"...

Home » News » Judas: "New bands will make it by being true to themselves"... 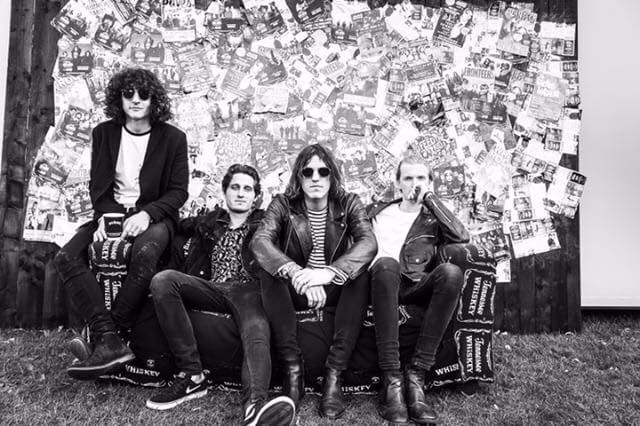 Making the most of your opportunities is everything for new bands and one emerging outfit who’ve made the most of theirs are ICMP alumni Judas.

The group have spent the last few months heating up the summer with some plugged in, amped up festival appearances , including a huge set on the main stage of the Leeds and Reading Festivals.

With new single (and indie classic in the making) ‘Ceasefire’ due for release this Friday (15th September) and more gigs in the locker including our Freshers Showcase on Monday 18 September and a support slot with The Sherlocks, expect their firey guitar music to be a music industry success story in 2018… We caught up with James from the band to find out more…

How did Judas start out?

We all went to ICMP - Sam and I overlapped but we weren’t on the same course. Todd just finished his degree in May - so we all went at different times, but met online through various band websites and mutual friends.

Were there any records that you bonded over when you first began life?

Our influences jump around quite a lot. We love artists like Kings of Leon, all their early, late records, but then we all like pop, heavier rock bands, other acts like Arctic Monkeys. As long as it’s good, we’ll listen to anything really, we’re not burdened by genre or anything like that.

How does the creative process work for Judas?

The singer usually has a skeleton, or an idea for a song, then the rest of the band will work on fleshing it out. Sometimes it will change completely, it’ll get rewritten, or other times it’ll just need an additional sound, perhaps a cymbal. It changes from song to song but we try to write as much as possible.

We don’t find it too hard to write, as we try to stay well-oiled when it comes to creating, playing and practising."

How was the summer - I guess festivals have been keeping you busy?

We had Isle of Wight where we played in the Big Top. Last year we played a little stage, so going from there to the Big Top was a huge leap for us. Then we played a couple of others, Reading and Leeds the other week which was on the main stage. It was incredible.

Last year, a band dropped out and the organisers had heard us about and gave us 20 minutes on the main stage. They gave Slaves an extra 20 minutes too. But we must have impressed them then as they invited us back so it was amazing. We changed our whole set up for the gig, adding three or four new songs which we debuted there. We went all out and I think it really paid off.

We’ve got a couple more events, inner city festivals towards the end of the year but the summer has mainly been spent making sure we’re playing events, writing and showing off our best songs.

What’s next for Judas?

We’ve got our new single ‘Ceasefire’ out on 15th September so building up to that, making sure we’re getting press in and we’ve told everyone we can that the new music is coming out. We’ve got the gig on the 18th with ICMP, then another slot supporting The Sherlocks. Then just writing, maybe unveiling a few more songs but just continuing to write and grow, develop our fanbase.

Is an album on the horizon?

It will be an end goal at some point. At the moment, we’ve got more than enough tunes for two or three albums but at this point, we’re not signed so we don’t have the funds to make a full length record. It’s the main obstacle stopping us.

We’ve been doing it all ourselves and keeping it independent for the last three years. We’ve just signed up with Vector Management about six months but it’s still very informal, we’re doing the majority of it ourselves. I think landing a deal at some point would be good but at the moment we’re happy doing as much as we can on our own.

How did your ICMP experiences help prepare you for the wider industry?

At ICMP, you’re in a class full of people, which really helps as it means you have to work harder than everyone else to stand out, to get further than them. It inspires you to want to be better."

I’ve been in this band for three years, and other bands for eight years. We’ve been touring relentlessly since we started. So studying at the college gives you a work ethic. It takes twice as much work as you think it would and four times as much work as you want it to. We’ve still got a long way to go, we’re up the first rung of the ladder but we’re still a way off from where we want to be. Staying focused is what it’s all about.

Have you any advice for emerging artists, anything you’ve learned since you’ve been in Judas that you wish you’d known when starting off?

Everyone will tell you to do this, do that but ultimately you’ll get where you want to be by following what you want to do."

People will tell you to change your name, change your songs, but you’ll get there in the end if you work hard and stay true to what you set out wanting to do.

In terms of writing, have you got any tips on how to beat writer’s block?

If you’re struggling with one song, then scrap it, come back to it in six months. Or alternatively, put your instruments down and do something else. It’s quite easy to write yourself into a rut. So make sure you balance fun with work. It works for us...

Listen to 'Ceasefire' by Judas.

Judas will be appearing at our Freshers Showcase on 18th September. Find out more about the gig and our Freshers fortnight.

If you’re looking to take your playing and performing to the next level like certain members of the band, then why not join us here at ICMP?