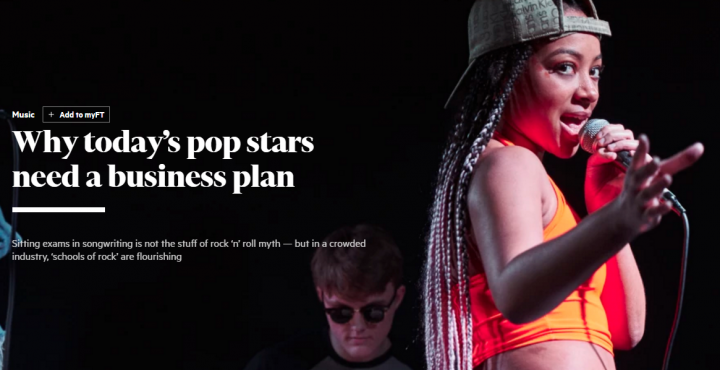 Last weekend, ICMP took prime position in a feature article which appeared in the Financial Times – one of the UK’s most prestigious national newspapers.

The article, by leading FT journalist David Cheal, was entitled ‘Too cool for school: can you learn to be a pop star?’ and pondered whether there’s a place for modern music colleges and their deliberate teaching methods in the world of rock’n’roll – where artistic authenticity and a DIY road to success is often ranked above everything else. While it came as no surprise to us, David sensibly agreed that there is!

The article mentions how Paul was a former ICMP student (back when it was called the Guitar Institute) and how he was so inspired by the vision and passion evident at the music college that he bought it. At the time, it struck him how “ridiculously absurd” it was that there was no real formal pathway for musicians, performers and writers of popular music to develop their craft, so he set about creating and developing these opportunities with ICMP.

When interviewed, Dave Roberts gave David a rundown of all the benefits ICMP students receive by being a part of the college’s network:

“When we think students are ready, we introduce them to potential managers, publishers and labels. We hold lots of panels here, with guests from the industry talking about things like digital marketing, how to analyse data, the demographics of your potential fan base, developing your brand and monetising it. We get A&R guys to come in and listen to students’ tracks and give feedback.”

Third-year Songwriting degree student, Ben Rotherham, was interviewed for the article as well, and his band, Blush – of which he’s the singer and guitarist and which is composed of ICMP musicians – got a mention. He discussed how he and his fellow bandmates have just completed a short tour of the UK, strategically planned and booked by themselves using analytics, with a bit of help from ICMP: “We looked on social media to find where people are listening to us, [and to] also [ask] where is our potential market going to be.”

It also spoke about how the music industry has changed radically in recent years. The old model of getting discovered, signed and being given an advance by a record company no longer exists, and the music business now expects musicians and artists to be closer to the “finished article”.

David concludes that this is where music colleges like ICMP London can really add value. They deliver a “business-savy approach”, giving the necessary skills, training and knowledge to aspiring artists so they can be properly prepared to start building successful careers. And by studying on an ICMP music course, students get the opportunity to develop a range of abilities which enable them to work successfully and build a career in what is now known as the ‘gig economy’.