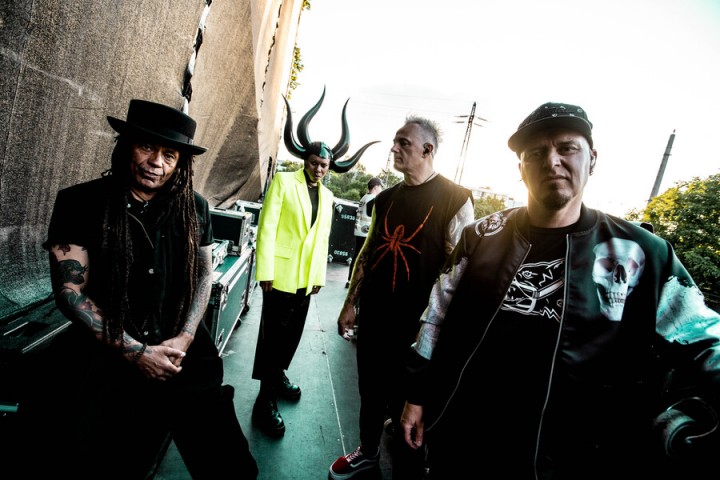 Ace, ICMP's Head of Industry Partnerships and Business Development, has spent most of the summer on the road with the legendary British rockers, Skunk Anansie.

Read the final edition of his tour diary on the band's adventures...

So here we are, back on the friendly shores of the UK.

The tour has ended, and we are back home in one piece … just about. It was a spectacular display of grit, determination and gut-busting energy similar to igniting a dormant volcano in each city we visited … but dealing with a deadly lava flow at the same time.

We encountered highs and lows, new experiences and many hurdles along the way.

Like that time, we had a crew mutiny and the Tour Manager walked out on us. Or like that time the toilet broke on the crew bus and they were without such vital facilities for over 24 hours of driving through Europe. And hey, what about the fuel increases, new Brexit laws, customs regulations and merchandise concessions. 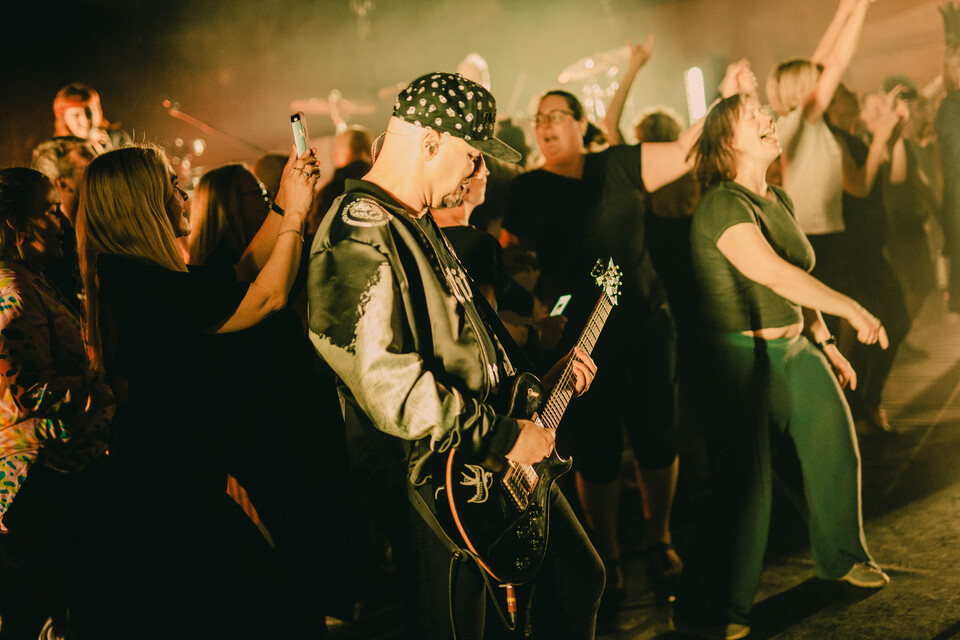 These were just some of thrills and spills of being the first British live band to go into Europe after Brexit and the pandemic!

So, there were some disadvantages, as you could obviously guess and day-to-day things that needed to be addressed with the new order of things out there. The positive side was the fact that we absolutely smashed it everywhere we went! 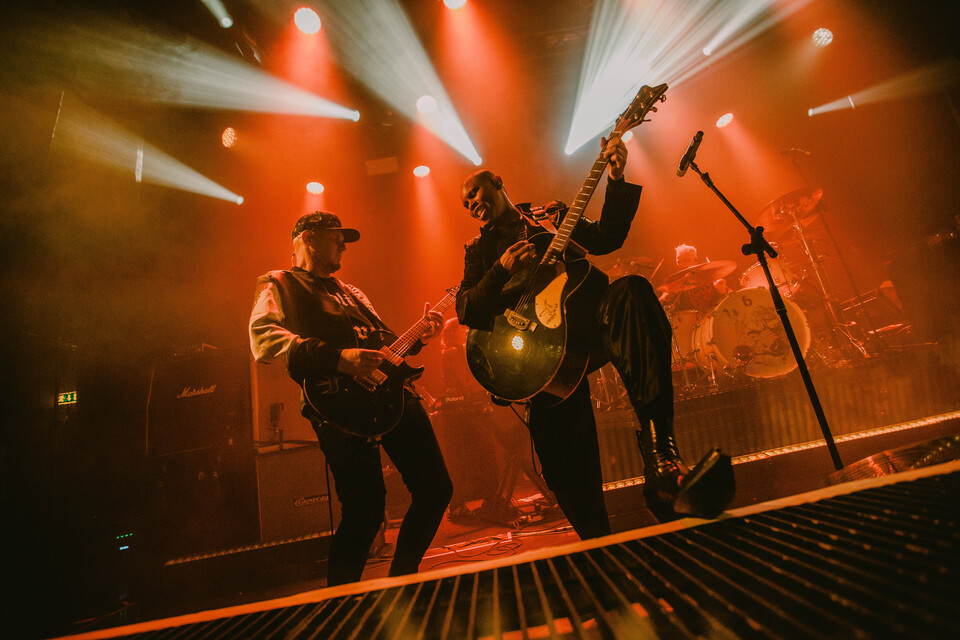 In my opinion, this was due to three main reasons.

1. It was the first gig that people had gone to in probably over two years, Covid restrictions were leaving and it was a complete celebration of both.

2. Venues were just re-opening up again to host live gigs, and we happened to be the first band in them in some cases which was exciting. It also held its challenges starting up these places with skeleton staff and new rules.

3. This is probably the most important one - this tour had been re-scheduled three times and Skunk fans, being awesome and loyal as they are, held onto their tickets and had not refunded them, so we had the massive advantage of an almost sold-out tour before we even got out there! 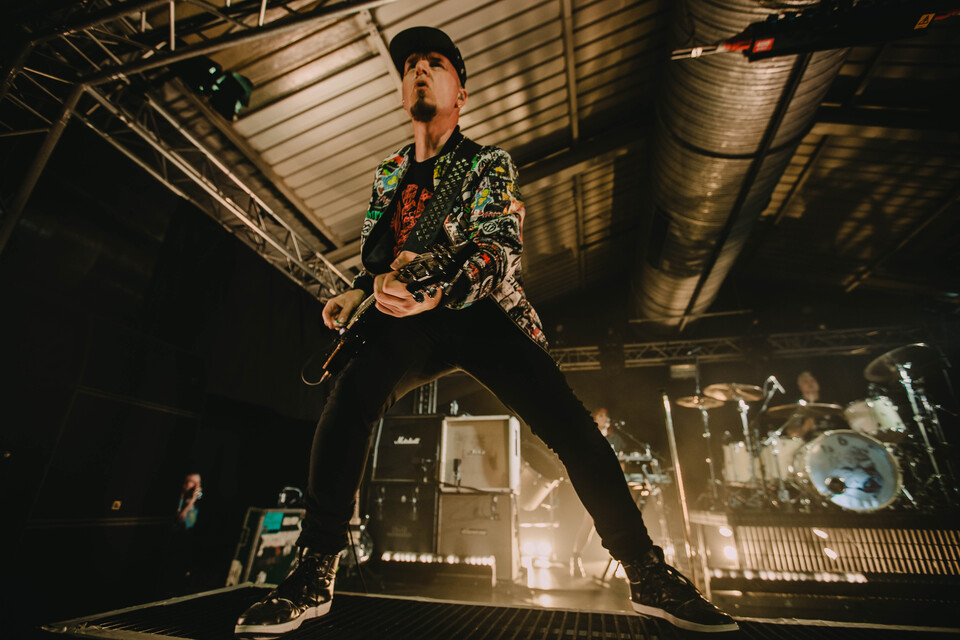 Tickets that had actually been refunded could be snapped up by fans at those places to fill the venues to the brim. Consequently, the shows were some of the best we have ever played in our 28-year history.

These gigs were exciting, unpredictable, full of energy, and a complete celebration of the human race being able to congregate and party together after everything we have collectively been through."

We had been planning this return since last October, without a manager as ours had retired before this onslaught of activity commenced.

This meant that the day-to-day running of the band was complicated and sometimes quite stressful.

Cash flow was one of our biggest problems. It took so much money to get just get out there on the road for the first show, it was a real gamble that we would go bankrupt if anything was to go wrong at the beginning, or in fact at any point of the tour. 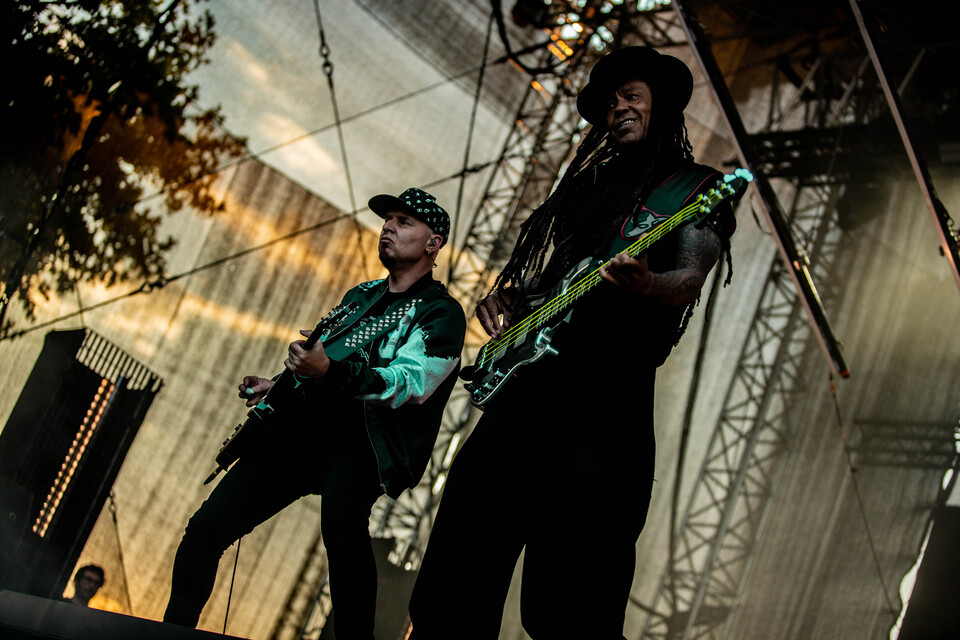 Some suppliers actually threatened to pull out the tour if we didn’t pay them the money we owed them then and there. We encountered the expected and the unexpected with situations such as: near the beginning of the tour nearly everybody in the band and the crew caught Covid when we hit the UK and restrictions lifted, and then other hurdles of the living on a bus lifestyle such as Mark contracting bronchopneumonia and Skin dealing with laryngitis and bronchitis near the end of the tour.

But we knew it was now or never. We couldn’t stop this runaway train no matter and just had to complete the tour for ourselves as well as surviving as a band and a business.

Quick thinking and problem-solving was the order of the day from the moment we woke up to the minute our heads hit the pillow." 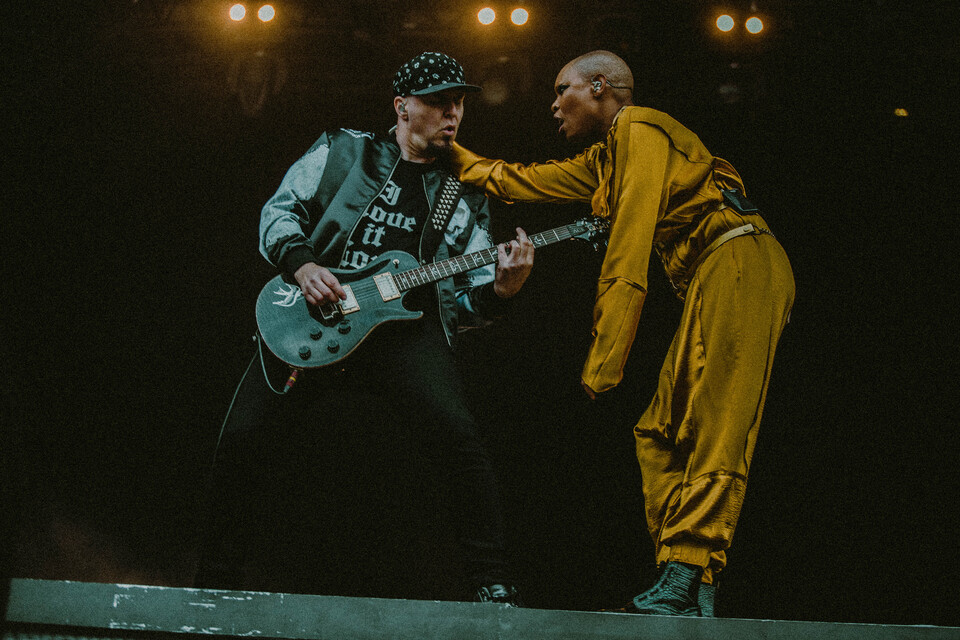 Luckily, we had rearranged the team throughout the past three months to have the best people on board we could find. Earlier on, we had tech crew leaving poached by other bands plus personality clashes and incompetence. And if you didn’t know, there’s this thing about drivers, buses and trucks on the tour, where they only have a certain amount of hours they can drive before they have to stop and rest for a full night's sleep. 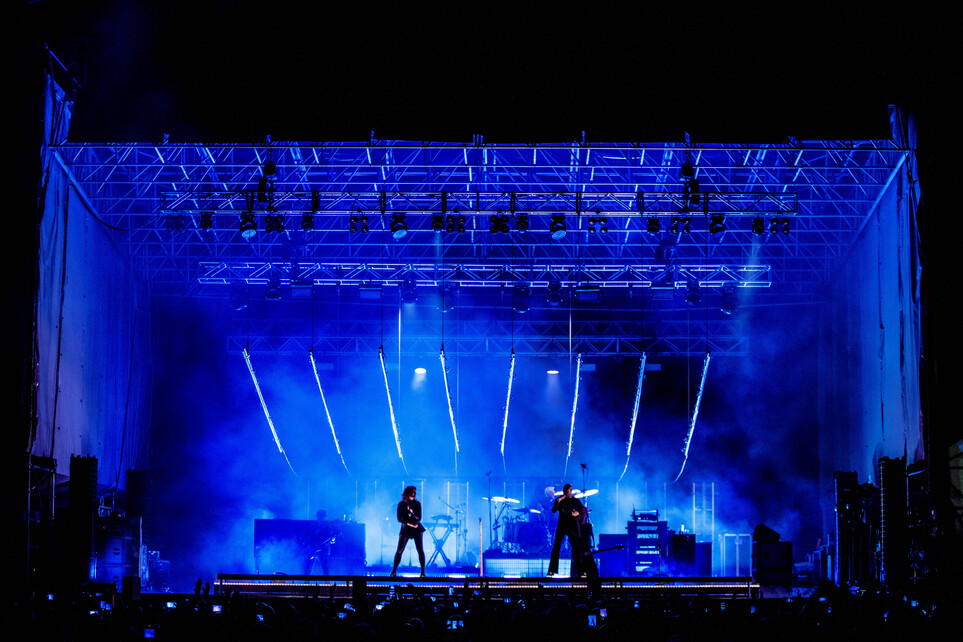 We encountered many moments, with all the delays with ferries and road closures, where we would arrive at gigs with only minutes to spare.

For the finale on the way home, it took us so long to get back to the UK that as soon as we arrived, the bus driver dropped us all out on the road at the nearest station with our suitcases. We had to catch cabs home from Kent at £150 each. The initial 16 hour journey from Vienna had literally turned into a 24 hour escapade by the time I arrived back.

When I got in late that night and threw my bags down in my house, I was so glad to be home. I felt really proud that we had achieved so much with so many hurdles and risks for the hundred days that we had been out on the road. 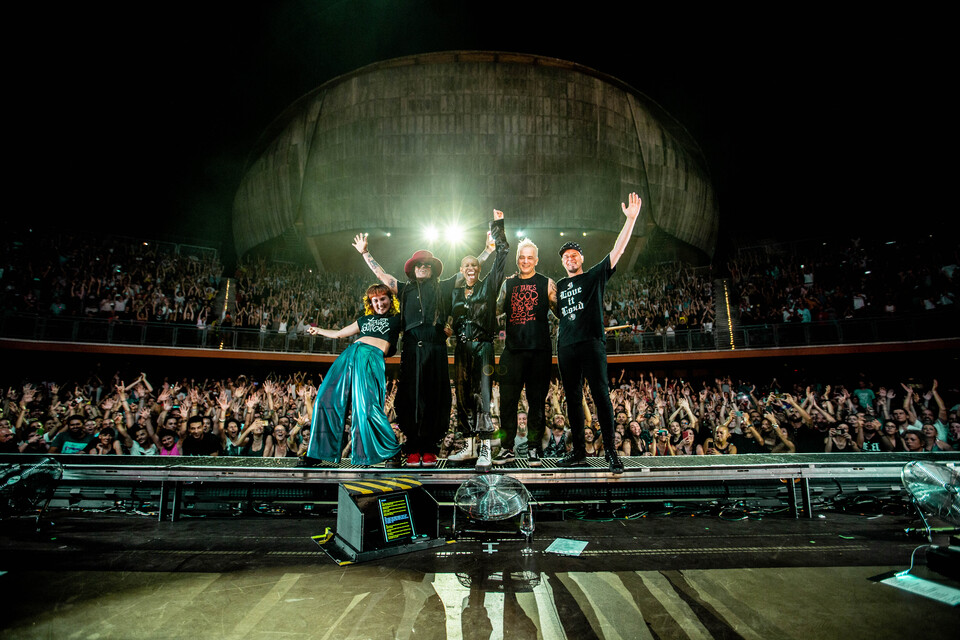 When you are on tour, especially on this scale as professional musicians, support from your sponsors and endorsements is essential.

I’m really thankful personally that I had PRS Guitars, IK Multimedia, D’Addario, Koch Amps, Zilla Cabs, Austrian Audio and No Fixed Abode on board. Between them they helped supply everything from guitars, amps and strings right up to my live stage outfits! Not only is this fantastic with saving on tour costs, but it’s also crucial stuff that keeps up you and running while you are busy out there concentrating on the main event. 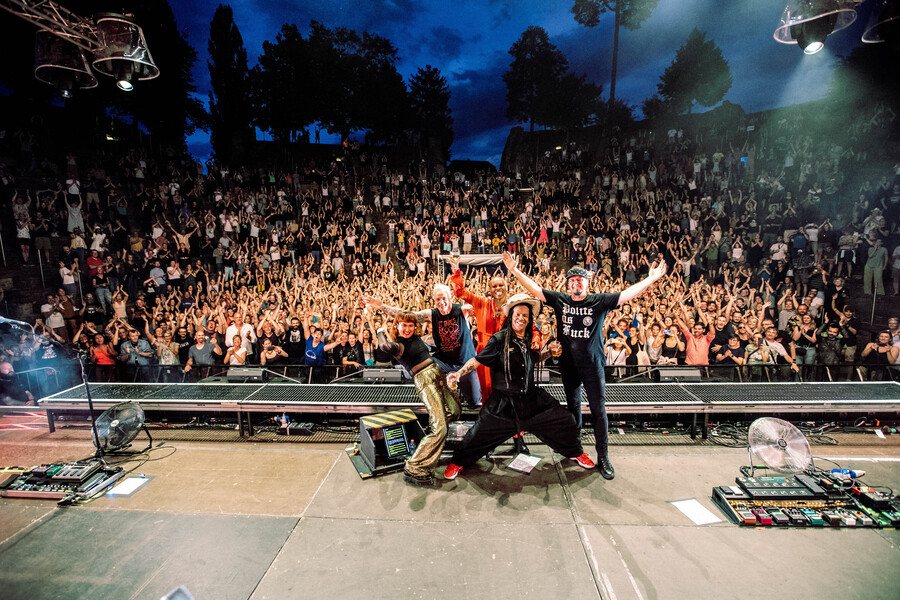 And finally, I must thank ICMP too for their continuing support and belief in me as an artist as well as being part of the amazing team here!

It wasn’t easy running the two jobs simultaneously; as I had to create an office every day to work through the daytime on the educational side of things, then switch off in the evening to play the show.

There were a lot of 16 hour days and burning the candle at both ends but it really did pay off in the end. As not only did I manage to tour Europe as a player,  I also managed to meet up with our partner schools, industry partners, students, staff and tutors along the way throughout the whole of Europe."

Now I’m back, and settled in London at my spiritual home in ICMP, it’s just about rounding up the tour accounts, getting the money in, paying it back out and then regrouping with the band for the next adventure - which will start with songwriting sessions…

As with all great quests and adventures they always succeed with a great team. And I’m so blessed to have that around me…

For the next adventure … well, watch this space!