Our Masters in Songwriting student Katherine Moynihan tells us how her studies have shaped her music as well as her recent adventures in Nashville... 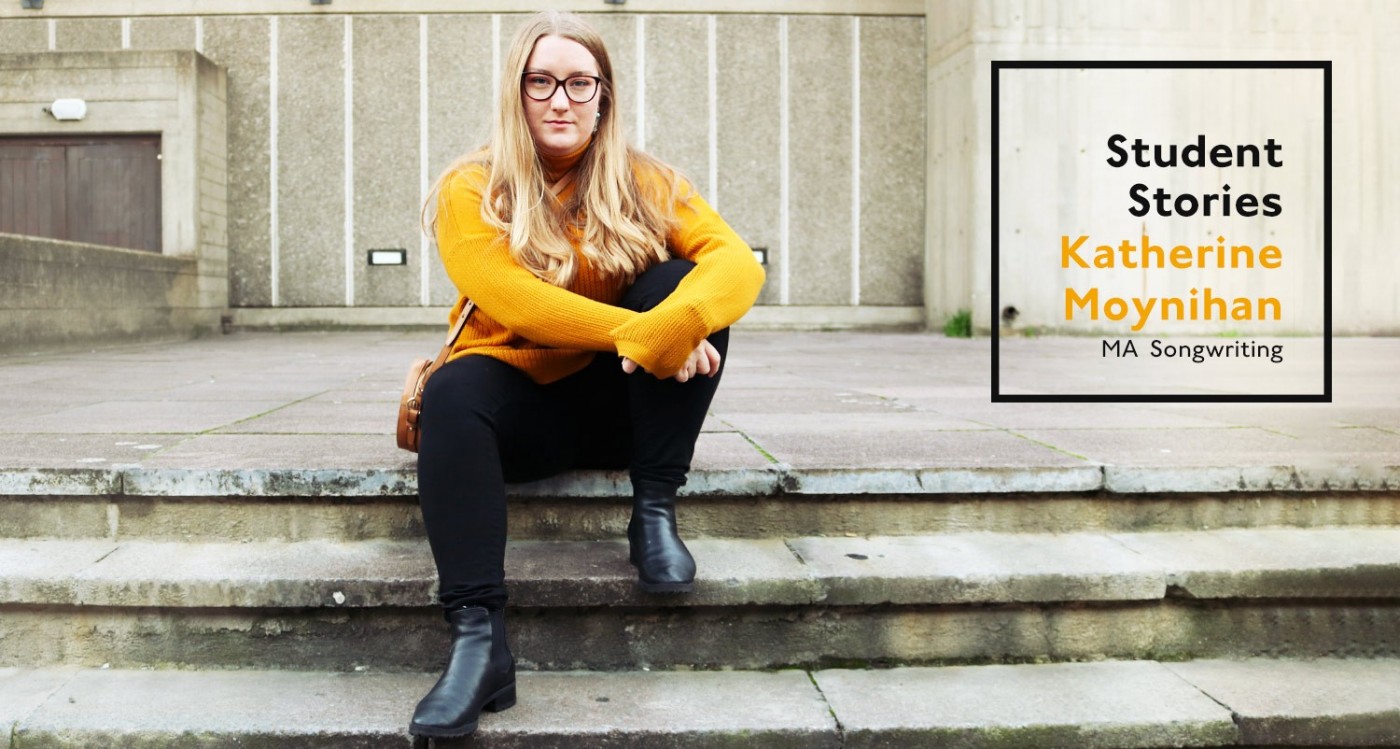 MA Songwriting student Katherine Moynihan is another burgeoning talent from our Songwriting faculty.

Our current crop of songwriting students including Satch Satchell and Truly Ford is indicative of just of the musical forces bubbling within the walls of ICMP. Here we catch up with Katherine to learn more about her musical journey to date and her adventures at the Tin Pan South music festival in Nashville with ICMP...

How did you discover your passion for music?

I’ve been playing the piano since I was really young, so music has always been a part of my life. My parents are also avid music listeners, so there was also always music playing around my house or in the car when I was younger. I started writing songs aged 13 on the piano and then I got a guitar for my 14th birthday.

It felt like a natural transition from learning and singing other people’s songs, but it was also heavily inspired by some of the young female songwriters like Laura Marling and Taylor Swift. Neither of them are that much older than me, and I think following their music gave me the confidence to start writing my own songs.

Could you talk a little about your studies at ICMP - what's keeping you busy?

I’m on the Masters in Songwriting, but I’m studying it part-time over two years. I’m currently between my first and second year. Those that are on the full-time course are currently working on their final projects, and I’ve been writing with a couple of them for this which is really exciting.

My last assignment was an essay for the Songwriting Musicology module. I wrote an essay about how songwriting can be therapeutic for songwriters – we had the freedom to choose a songwriter and a topic, so it was great to be able to write about something I was so genuinely interested in.

What led you to study with us?

Despite starting songwriting over a decade ago, I took my life in quite a different direction through school and university, and then into the working world - although I did continue to write songs. About 18 months ago, I realised that it was kind of now or never to start taking myself seriously as a songwriter. I was particularly interested in doing a Masters as I already had an undergraduate degree, and ICMP was one of the few places that offered one in songwriting. I knew that London was where I wanted to be, came to the Open Day and felt really inspired, and the course coupled with the opportunity to go to Nashville made my decision to apply very easy.

What have been the most important things you've learned during your time with us?

Success comes from the way that you approach your music. If you focus too much on the outcome and try and create something with the aim of it being “successful”, the likelihood is that it won’t be."

This came up in the Creative Process module in the first semester, and I have found it really liberating. Before I started the Masters, I feel like I put a lot of energy into trying to create music that I thought would be popular. I now feel much more empowered to focus on music that I love, rather than music I felt an external pressure to make.

What are the best things about studying at ICMP?

The community is great. Having never been in an environment like ICMP before, with so many insanely talented people under one roof, I was worried before I started that it would feel really competitive - but my experience has been quite the opposite. Particularly on the Masters, I have felt that everyone - students and tutors alike -supports each other, both in navigating the music industry and in bringing their best songs to class each week.

I believe you recently went over to Nashville with ICMP earlier this year - how did you find the trip?

It was incredible. We went for the Tin Pan South Festival, so it was all of the writers performing the songs rather than the artists which was a great insight. Some highlights include seeing Liz Rose perform a collection of early Taylor Swift songs, seeing Luke Laird, Natalie Hemby and Danial Tashian all perform different songs off of 'Golden Hour' (the Kacey Musgrave album) and seeing Amy Wadge play the Ed Sheeran classic, 'Thinking Out Loud'.

I also discovered some new favourite writers including Kate York and Michelle Buzz. Nashville itself is also incredibly inspiring, and the attitude to music is remarkable. The impression I left with was that you could pick up an instrument and start playing almost anywhere in Nashville, and people would listen to you. We also met some great, and insanely talented, songwriters from Belmont University and it’s great to know people out there now. I’ll definitely be going back!

Who are your songwriting heroes?

This is a hard question! Nashville definitely exposed me to another level of songwriting, so currently I'd say writers like Lori McKenna. With her, it feels like every line of her songs has meaning - and that is something I aspire to. But I take inspiration from writers across a range of genres, and I really love discovering new artists.

One thing I remember from a time when I was feeling creatively blocked, was advice from my friend Hannah who is also on the MA. She advised me to try writing a 'crap song’ every half an hour. This might seem small, but it’s really effective. Often when I’m in that head space I can’t reach the end of a song, which feels so frustrating.

I find the focus of writing a bad song removes the pressure for every word and melody to be perfect and gets me back into a head space where I can finish something, which helps me get back to the songs I want to be writing."

Sometimes the ‘crap songs’ aren’t terrible either, so thanks Hannah!

What other musical projects are you working on?

I try to divide my songwriting time between writing with and for other artists and myself.  I’ve been focusing a bit more on writing for myself recently as I’m looking to release an EP next year, so it has been great to spend some time bringing together some songs I love.

My friend Amy Collins [another MA Songwriting student] and I are also planning on releasing a Winter/Christmas themed EP at the end of this year. We have some time this summer to develop the songs but it should be interesting to write festive music out of season...