Our current student on reality TV, new music and how she's found her true voice as a songwriter... 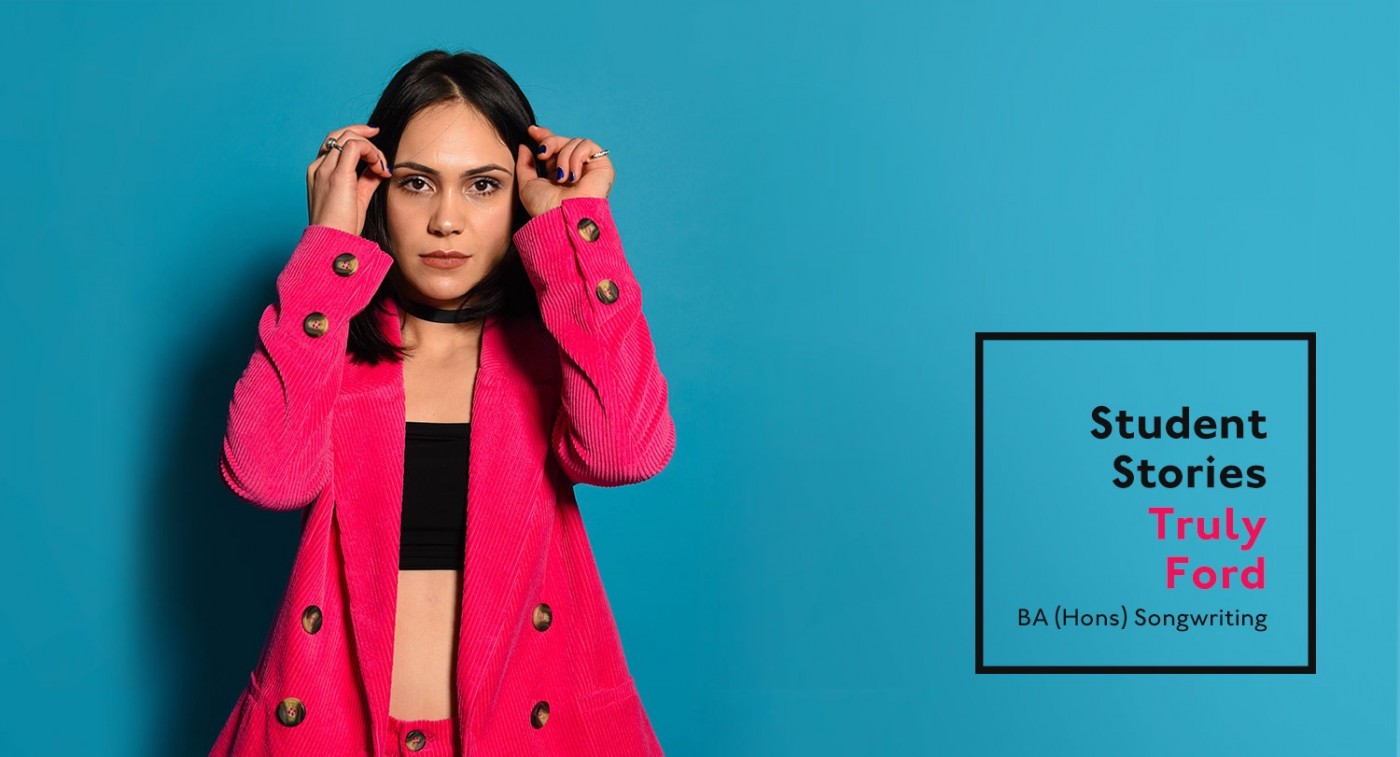 Our BA Songwriting student Truly Ford has enjoyed an exciting music industry journey so far, both in and outside our classroom.

Many will know her as a previous contestant on music reality show, 'The Voice' . She was a hit on the show with ICMP supporting her journey throughout. Following an appearance at our Songwriters' Circle event with Frank Turner last year, Truly has thrown herself into her course with us, focussing on finding her identity as an artist and now readying herself for the release of new music.

We caught up with her to learn more about her experiences on TV, her studies with us and where she's heading next...

After spending a few years working in the industry, doing countless co-writing sessions for myself and other artists I realised I still had a lot to learn about the songwriting craft. This led me to thinking about how to better myself as a writer and I came across ICMP.

I can safely say that after three years studying at ICMP, I have definitely learned so much and feel more confident going out into the world as a competent songwriter."

What have been the most important lessons you've learned during your time with us?

Editing a song is really important. And this knowledge has helped me to be less precious about the first draft. Also, song structures, methods of writing and giving critique to others helps you be more skilled at identifying any changes that can improve a song.

What are the best things about studying with ICMP?

ICMP is like a safe bubble where you can take risks and try new things out without being judged. Fellow students and tutors have helped me come out of my shell and receiving frequent feedback really helps you to better yourself. Also being surrounded by other talented musicians has inspired me to keep pushing forward.

You were a success on the TV show, 'The Voice'. Could you talk a little about your experiences?

I never thought I'd go on a TV show but I found myself auditioning for it on a gut feeling it could work out. Which it did and I had the most incredible experience.

I describe it to people as a short course in how to be a professional musician because we had full on rehearsals, styling, radio/ TV interviews, live TV performances and I absorbed so much knowledge during the experience.

After the show I went to LA and worked with my coach in the studio and his manager ended up signing me too. Aside from that I learned a lot about myself. Mentally, I really struggled with the chaos of it and was actually diagnosed with Bipolar shortly after the show ended and I think in a way the show brought my diagnosis on a lot quicker than it would have if I hadn't gone through the hectic schedules.

But when I watch videos of my performance, I realise I still didn't know who I was at the time, even down to my dress sense.

In the past two years since 'The Voice' ended, I have grown up so much, found my voice, found me and I really believe competing led me to where I am today.

For any aspiring songwriters, what would you advise them?

Practice practice practice! Try co-writing with different people, get really good with your instrument and learn theory as it will open up your musical vocabulary and make writing an even more magical and open experience.

You performed at a Songwriters' Circle event with Frank Turner. How did you find this opportunity and experience?

This was my first performance since ‘The Voice’. It was so chilled and the crowd felt very supportive of us performers. I played songs that were still really fresh and were about my mental health experiences. I felt a lot of emotion coming from the people around me and it gave me the push I needed to keep writing about it and release it to the world so others can hear it.

You're currently working on writing and producing your own record - could you talk a little about this? What is the project about and what has influenced/inspired it?

Yes I am, I have been working on this project for a year now. I wanted to take my time writing about my mental health/ illness because I want to do this justice. The subject can still be taboo so by releasing these recordings, I hope to inspire others to open up too.

I'm midway through the recording process and hope to begin releasing the songs in Autumn 2019. I'd also like to start performing again and make my comeback after a couple years of growing, getting better at my craft and finding out what I want to say.