Malcolm 'Bubba' McCarthy on how to be a drumming success

We quiz our drums alumnus on his success from co-writing with John Newman to MDing London club night Antics... 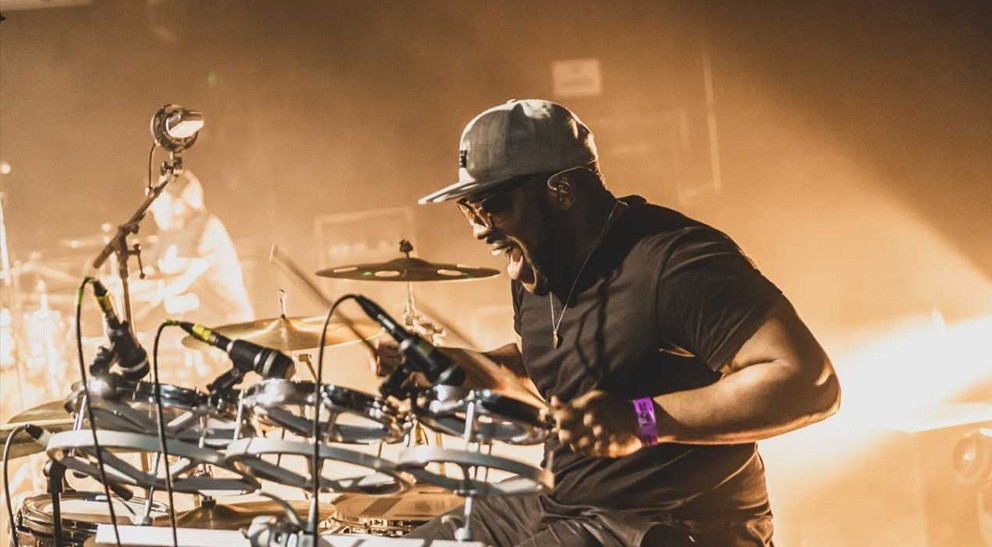 As a drummer, musical director, songwriter and more, Malcolm 'Bubba' McCarthy is one of London's most in-demand.

He originally studied History before joining us to study drums for a year on our Higher Diploma. The academic world's loss was the music world's gain with Bubba going on to enjoy a variety of music industry success including performing Glastonbury's Pyramid Stage with Angel Haze, collaborating closely with singer songwriter John Newman and acting as music director for Antics, one of the capital's biggest club nights.

Get to know Bubba in our new interview and learn his tips for success...

My musical life started in church, playing keys and drums. But it wasn't until I was 13/14 that I really got the bug for performing. There were two teachers at my high school, Mr Wasner and Mr Foulkes. It’s basically because of them that I’m a musician now. Mr Wasner was a jazz musician and taught me the AM pentatonic scale. It blew my mind!

Mr Foulkes introduced me to a whole new world of music. In class once, he put a Tower of Power CD on. It was a game changer for me because those guys are nasty! I had a nice moment with him a couple years back. He lives in Leipzig, Germany now, and I happened to be on tour with Kim Wilde. I got him on the guest list and we had the best hang afterwards!

What led you to ICMP? And how important was your time at ICMP in helping shape you as a musician?

I did my BA at Warwick studying History. After I graduated, I knew I wanted to take a year out doing music so I spent some time researching on Google and found ICMP.

For me, the biggest change was doing music day in day out. I loved it. I had great teachers and all of my fellow classmates were great drummers. We pushed each other and shared a lot."

I was able to sort my horrific technique and meet a tonne of incredible people, a lot of whom I still work closely with now.

You've obviously got a great relationship with John Newman. How did you meet John? And what's the secret of your successful collaboration with him?

I actually first met John three years ago at the airport heading to a gig in Germany. I’d just been hired as his new keys player but there was no time for rehearsals. It was so weird. The gig was huge and the sweatiest gig ever but immense. I ended up working on some album stuff with him last year, then he asked me to sign a publishing deal with him through Kobalt.

I think the secret to a great collaboration is just to spend time together. We’ve spent a lot of hours in each other’s company. I think it can go either when you tour with the same people but our touring party is definitely a close knit family.

Who do you look to for musical inspiration? Are there any artists or musicians who influence/inspire you?

This is a good question. I definitely think it’s a seasonal thing where someone will come out with some fresh music and I’ll be hooked on it. I think I’ve always been inspired by Pharrell. He’s a great artist and collaborator and is always pushing the bar. Everything he puts his hand to always seems to be original. Sia is another one who constantly inspires me. She’s an incredible writer. I also feel like she’s always doing something and it’s always great quality. That’s inspiring to me.

You've done a great deal of high profile work/gigs in your career to date - how did you get your foot in the door of this musical world? And how do you make sure these big names keep coming back to you for work?

Hmm. I'd like to say I have a definitive answer but I don’t. I think personally for me, there’s been a lot of repeat hiring.

Bob Knight, who hired me to do a Cody Chestnutt tour, also hired me to play keys for Jennifer Hudson.  He definitely wouldn’t have hired me again if I didn’t do a really good job on the first gig so I guess it helps to always be as good as possible."

I think the standard stuff - being reliable (punctual, learning material) being a good person to work with and hang with - are important. For a session musician, it’s all based on word of mouth, so your reputation is super important.

Trust me, word gets around fast. I think for pop gigs, versatility is super important. If you’re a keys player, your programming needs to be on point. If you’re a bass player, it’s super useful to play synth bass. If you’re a drummer, how are you with electronics? Friendships are important too. I know networking is a bit of a buzz word in creative industries but to me it’s all about relationships. Some of the people who put me on gigs or recommend me for gigs are close mates.

How was Glastonbury with Angel Haze? How did you deal with playing to such a big audience?

The way Glastonbury happened was super weird. The drummer’s wife was actually going into labour the day before rehearsals started. The MD called and asked me if I was free to do the gig. I was definitely free! It helped that I had played keys for Angel before, so I knew most of the arrangements. The gig was amazing, the audience was hyped. It was cool to see a huge crowd vibing with us. I just embraced it and jammed out!

What's your top piece of advice for our music students around sustaining a career in the music industry?

Be nice to people! Work daily on your craft: There’s no substitute for time. Go and meet people: Our industry basically runs on collaboration. Set goals for what you want to do; it helps ease the pressure of, ‘I don’t know what I’m doing.’"

Obviously it depends on what you want to do, but expanding what you do is useful. For example if you’re doing functions, maybe look into doing music for adverts in the day. Stay driven and keep learning.

How important are your networking abilities when it comes to finding opportunities?

Important but not in the way you may think. For example, I don’t think it’s that useful getting the numbers of 10 other managers or MDs if there’s no meaningful conversation. To me it would be more useful to get two and have a great conversation where you’re in touch constantly. I think it’s also important to be seen. If you’re out of sight, you’re out of mind.

How did you get involved with the Antics club night?

DJ Antics aka Rich Titchener has been a close friend of mine for ages. He actually got me involved years ago when he was doing gigs at the Jazz Cafe. I’ve been MD/drumming with him ever since. It’s an incredible gig. Koko goes crazy every time we do it!

I’m looking forward to getting some releases with artists I’ve been writing and producing for. I’ve got more writing sessions with some exciting artists, which I’m pumped about. Also, John Newman has got some new music being released so looking forward to touring that next year.

Study Drums in London with ICMP

by Jim Ottewill
December 17, 2018
Creators
Back to Blog Home