ICMP rockers The Velvet Hands give us the skinny on their debut album 'Party's Over' and career to date in our new interview... 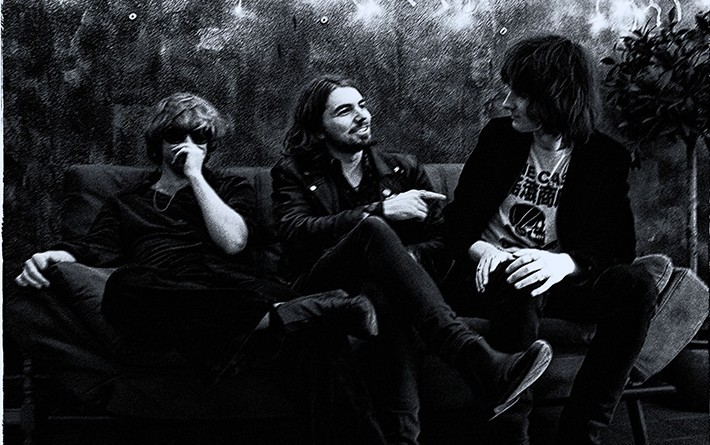 With a debut LP due to drop on Record Store Day (RSD) and support gigs lined up with The Bluetones, the future is looking pretty bright for The Velvet Hands.

Featuring Toby Mitchell and Sam Hilder, respectively ICMP student and graduate from our BA Creative Musicianship degree, the band have enjoyed some success with plenty of gigs, touring and releases as well as kicking off this latest academic year with a slot at our Freshers’ Showcase.

More recently, the band have been one of the first recipients of funding from our Accelerator Fund, an initiative set up to assist our students with their various projects.

Ahead of the release of their debut album, ‘Party’s Over’, on RSD on 21st April, we caught up with Toby to learn more about the band, their musical roots and what’s happening next…

How did you start your musical journey? Was there a song or person who started everything for you?

My grandad taught me how to play the three chords to 'Wild Thing' by The Troggs on guitar when I was about 10, and I've never learnt another chord since.

How did you the Velvet Hands get together? How did you all meet and what drew you to each other?

Dan and I met at school in Cornwall when we were 14, so we've known each other for far too long. We then met Sammo in Kilburn and we found out that he was from Cornwall too, so it was far too convenient for him not to give up his hopes and dreams and to join our band.

The debut album 'Party's Over' is released on Record Store Day (RSD) - could you explain a little about the record? What is it all about? Are there any themes?

It's a collection of everything we've done to date really. It's purposely very punky and lo-fi with a couple of surprises along the way.

What are your hopes for the record?

We've got no idea how far it'll travel really. The singles have been received really well so far. We'll hopefully get some more radio play, offered some more tours, and make it out alive.

How did the RSD tie in come about?

We put out our first seven inch on RSD and they've been very good to us! It makes a bit of excitement around the release as they're so limited! Will you get one, will you not? Find out on 21st April!

What's the best piece of advice you've received about your music industry career?

'Don't bother mate'.. just wish we'd listened! And to never give up, it'll all work out in the end if you work hard enough!

Your band has had a great 2018 picking up plenty of critical acclaim and a growing fan base - what have been the big moments so far in your career that have helped you take the next step up?

Getting involved with 'This Feeling' has really helped us to grow, they truly care about young guitar bands! Huw Stephens, John Kennedy and Steve Lamacq have also been really kind to us, along with loads of other BBC Radio 6 and 1 DJ's! The Bluetones are taking us on tour in May too, along with our debut album coming out! Lots of fun, more to come!

You've studied at ICMP - how important has your time with the college been? What have been the best things you've learned?

ICMP has been a lot of fun and good to meet new people! Everybody is very supportive of each other and it has been a great place to learn! The London music scene can be very honest so it's been a safe space for us!"

How important has the Accelerator funding been in progressing your career?

It's been so helpful and has gone towards some recordings for our second album, forever moving forwards!

What does the future for you and the band have in store?

We have a John Kennedy session coming out soon, and then a tour through May, starting with some dates supporting The Bluetones and a date in Paris! Our album is coming out on 500 limited vinyl on RSDay, then on CD/ Spotify/ itunes on 4th May. I'll leave ya with that!

Visit velvethands.co.uk for more information and to find out more about their debut album.

Watch the video to 'Only Blame Myself'.