Our alumnus lets us in on his studies, library music projects and how his time at ICMP helped elevate his musical career... 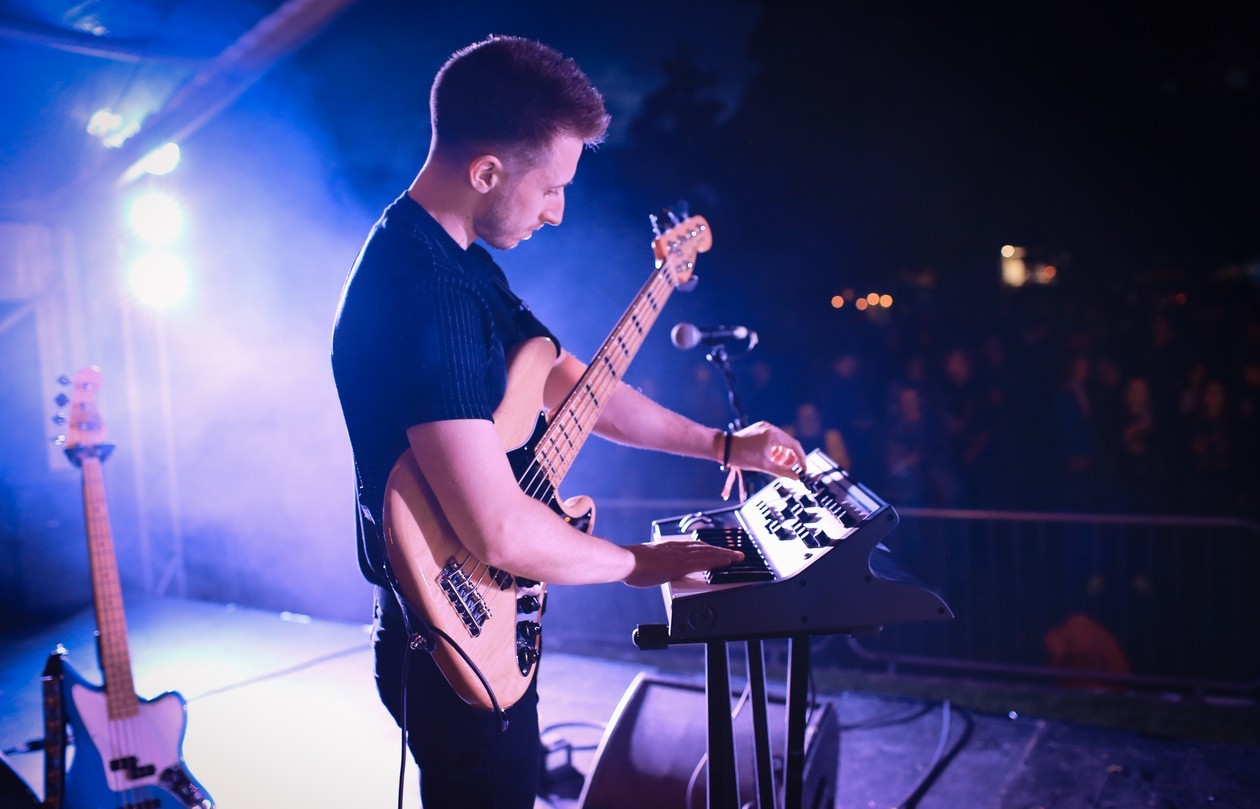 As a graduate of our MMus in Popular Music Performance course and a seasoned performer and educator, bassist Henry James embodies the eclectic spirit of the modern musician.

He's worked across a wide range of projects, from sharing his expertise with others as a tutor to writing library music alongside his own artist project.

With so much music around him, we caught up with Henry to find out more about how he discovered the bass and what he learned from studying on our Masters course...

After a few unsuccessful attempts at the guitar, I was finally mentally prepared to really learn at the ripe old age of 15. I would like to say that this is down to some divine inspiration, or something within me yearning for some kind of self expression, but, in reality, I just was a gawky, hormonal, puberty stricken teenager wanting a girlfriend.

My friend Chris was in a band, and, after seeing him perform with what seemed like millions of girls screaming, I decided it was the best way forward as a painfully shy fifteen year old.

How did you pick up a bass?

It was due to this Chris and another Chris (Squire), that I chose the electric bass. I was obsessed with the band Yes, and their Rickenbacker sounded to me like the devil himself had come for a visit.

I then took it on myself to learn the whole of the Yes album ‘Close to the Edge’ by ear. It took months, constantly playing, pausing, rewinding the CD and so on. It kind of became an escape from there but for fun really.

I should note that I had no idea that both bass and prog were probably the worst things you could choose to impress the opposite sex.

I’d already been freelancing a fair bit with artists when my friend Joe asked me to perform in his recital for his MMus course.

I agreed, and, though incredibly intimidated by the insane musicianship, I played the recital and all went swimmingly. It was then that I got talking to Audrey Riley. Now, any ICMP student past and present will tell you how awesome Audrey is, as a musician, an arranger and, in my opinion most importantly, as a person.

ICMP tutor Audrey Riley encouraged me to apply for the MMus course, despite my lack of both academic qualifications and confidence. I was fortunate enough to get in."

How was your time studying? Could you talk a little about what you pursued through your studies?

There were times where it was (and I was) a nightmare! I was still trying to work full time - gigging until the early hours, teaching and doing studio work - surviving on little-to-no-sleep while crashing at friends’ places, socialising a little too eagerly at times and trying to cram in studying, but I wouldn’t change it for the world.

All the stress, insecurity and resulting lessons learned have helped me to become a little wiser. Through my studies, I made the decision to study modern jazz. Before ICMP, I knew the fundamentals, particularly with regards to bass, but I’d never truly got the foothold I wanted. I decided to focus my energies on bebop and jazz-fusion - two genres which are so important to modern jazz.

With regards to bebop, I chose to study Charlie Parker and Dizzy Gillespie, and with jazz-fusion, the emphasis was placed on Miles Davis’ ‘electric period’, as well as some of his sidemen, who later became major pioneers themselves.

What were the main things you learned while with us?

I learned I had a huge problem with self-doubt. The early sessions dealing with understanding imposter syndrome and the like really revealed this within me. Learning this at ICMP - though I didn’t know it at the time - enabled me to reevaluate how I see myself and as a result, others too.

Other than that, the production course was vital. It gave me a fantastic platform upon which to work, explaining stuff in a systematic way, erasing the need to sit through hours of YouTube videos. We also had an insight into arranging, which I really enjoyed. One of the biggest things I learned, though, was to find people that align with your most creative self.

In a number of people at ICMP, I found creatives that I truly resonated with. They embodied the person and musician I want to be."

Their positivity, can-do approach and eager attitude, often laced with a quick sense of humour, made me want to both work with and learn from them (and still do to this day).

You’ve worked within the world of library music - could you talk a little about this?

I was doing sessions for a rock/punk artist recently and the drummer (Gary) had about a million ideas lined up for library music, and it just so happens that I did too. So, after he came to me explaining that he wanted to get into this, we decided that two heads were better than one and away we went. A month or two later, we have four albums and another one on the way.

It works really well, because we both work very quickly and are proactive. We have a similar mentality, that we want to create music to a high standard, but also with less emphasis on sentimentality and more on the ‘get it out, move on’ approach. The benefits are monumental. It’s fun, it’s (almost) free to create, and you get to learn how to compose, play, arrange and produce in different genres. The techniques I’m learning today I will use on my solo material in the future, all while earning a few quid. That’s the way I see it.

Could you talk a little about the production skills you learned while with us?

I learned so much in the production classes. Whether it was the basics of compression, miking techniques, or how to organise your mix or master session, they taught me the seeds of everything I needed to know in order to become self-sufficient. Now, of course, nothing beats going to a state-of-the-art studio to record, but I can’t afford that and I love the control I get from being so hands on.

What separated them from other tutors I’ve had is that they would really go into the mechanics of what you were doing. From their classes, I went on to study certain aspects (say, mixing drums for example) in greater detail, using the springboard they gave me. They also inadvertently helped with other issues, for example, pedalboards and signal chains, EQing amps and active instruments, noticing qualities of certain pickups and even picking up on how certain playing techniques can come across in recording.

You've also got new music just out - how did the recordings come about and what were the aims of working on them?

So, around 4-5 months ago, with the apocalypse seemingly in mid-flight, and after reading some spiritual teachings of Tolle, I decided it was time to finally garner up the courage to show the world a bit of me.

Out of nowhere came this tune with the working title 'Lobotomy’, and so I ran with it. That later became ‘The Boss of Me’ (not quite as sinister), and I was amazed by the response. People actually listened! Mental! And so, it became something. Slowly, I’m pushing a bit more of myself into these recordings, as if I’m getting to know the role of the artist a bit more (in other words, I can actually show off a bit). One of the most recent tracks,‘Two Left Feet’, was actually one I submitted as part of my production course at ICMP. I’ve re-recorded the bass line and tightened up the mix, and so it’s been a great way to see my progress.

My bass tutor always said to me that the definition of good taste is knowing what you can get away with, so naturally, me being me, I want to push that boundary a bit and also see how far I can push myself out of my own comfort zone.

Visit henryjamesmusic.com to find out more. Listen to his latest release, 'She' below.

by ICMP staff writer
March 17, 2021
Creators
Back to Blog Home