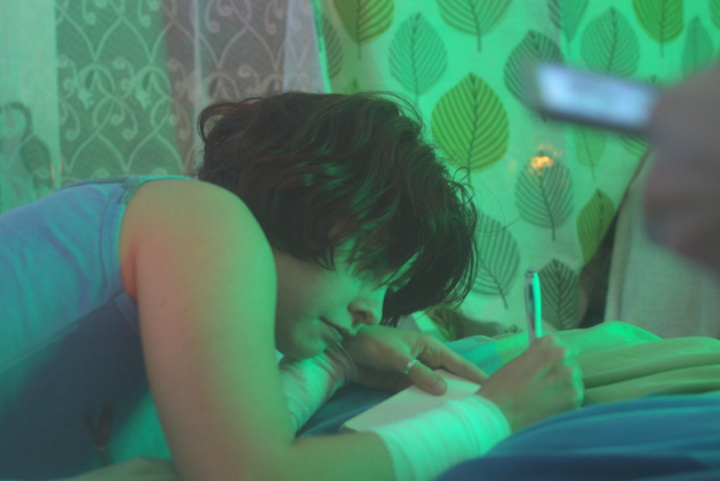 Congratulations to ICMP tutor, composer and artist Charlotte Hatherley who has been nominated in the UK Music Video Awards (UKMVA) for her work on short film, ‘Imogen’.

The awards aims to celebrate music videos and music filmmaking and ‘Imogen’, a film exploring the challenges faced by the film’s eponymous protagonist, Imogen Goldie-Wells, and the grief faced by her family after her passing.

The film’s music is a posthumous collaboration, put together by Charlotte in response to demos Imogen recorded in secret while she was alive.

In a statement, Charlotte said: “It was important that the soundtrack felt like a collaboration between Imogen and I. I love her raw and honest songs with all the hiss and crackle that comes with home recording. Though my score is deliberately distinct in style, it’s derived from a melodic motif in Imogen’s song ‘Stem Cells’, ensuring our music is intrinsically linked."

Alongside Imogen’s music, the film reveals drawings and often painfully honest passages from her diaries; within them, there is hope, beauty and destruction, which I tried to express in the music."

"Audrey Riley’s beautiful cello playing elevates the more delicate and heart-rending passages, whilst unsettling electronic sounds and modular synth generated drones take over to reflect Imogen’s desperate mental state. As someone who suffered mental health issues, Imogen was prone to sensory overload which the music had to echo."

Supported by the BFI Doc Society Fund, the film deals openly with subjects such as depression, eating disorders, self-harm, self-medication and the constant struggle to answer to oneself ‘What is wrong with me?’.

The film is directed and produced by Lola Young and Matt White.

Charlotte is a tutor on ICMP's BA Music Production for Film, TV and Games.

Listen to the soundtrack below:

Become a composer or producer of music for the moving image