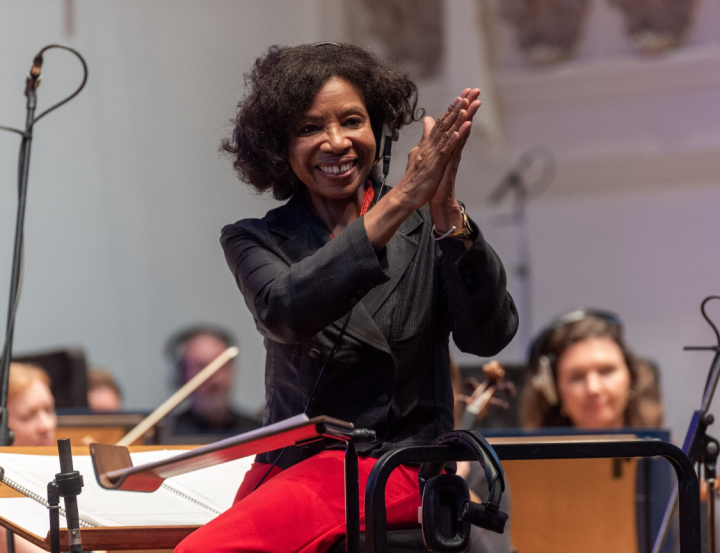 We are delighted that ICMP students had the opportunity to contribute to the composition of the Royal Philharmonic Orchestra (RPO)’s UEFA Women’s EURO 2022 anthem.

In March, a national call out invited fans to submit words, ideas and phrases for a new piece of music celebrating the competition. The final work was pulled together by acclaimed composer Shirley Thompson (pictured).

Part of the work focused on communities in host cities including London. The borough of Brent, where ICMP is located, was chosen as Wembley Stadium is nearby.

ICMP was among the community groups recommended by Brent Council to participate in the project.

Representatives from RPO visited ICMP in March and worked with second-year BA Songwriting students studying our Songwriting in the Community module. All ideas were then shared with Shirley who used them in her final composition.

ICMP is proud to be part of the vibrant and diverse borough of Brent. Not only for our students to know the community they are coming into, but also for our community to know how we can work together too."

"Our incredibly talented students take part in many community engagements, something which we have increased since the pandemic. Having recently been appointed ICMP's Community and Widening Participation Manager I have the privilege to find them new and exciting initiatives to engage with."

She continued: "Some of our second year Songwriting students had a fantastic opportunity to work with the RPO this year on the Euro anthem.

Our students were able to give a different perspective not only with lyrics but also with composition and arranging. This anthem is now embedded in the competition and is being performed by community groups across the country and official fan zones."

The workshop was on Tuesday 1st March, and featured three RPO musicians alongside facilitator Rosie Bergonzi.

Earlier in the year, ICMP was announced as part of a new music academy launched for Brent.

This cross-genre academy is aimed at those aged between four and 19 and will provide a pathway to careers throughout the music industry, from music production and administration to performance in any musical style or genre.

You can listen to the UEFA Women’s EURO 2022 anthem, 'Beautiful Game', below: