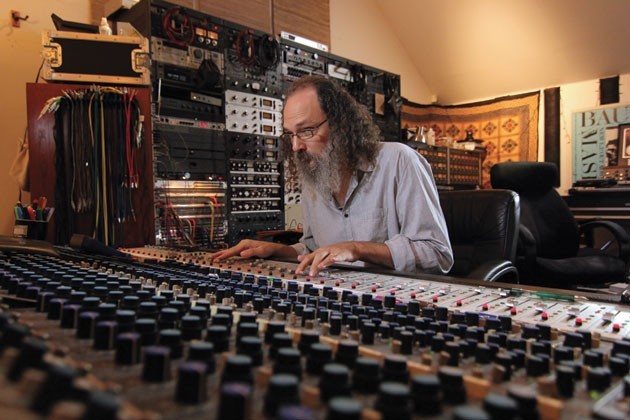 Following yet another fantastic year of events here at the ICMP, we are already planning our Masterclass programme for the new academic year which is shaping up to be one of the busiest and best yet.

We really can’t wait to get the ball rolling, with visits from a whole host of brilliant musicians and industry professionals, and we are therefore delighted to announce the first of many to look forward to: Andrew Scheps, a Grammy award-winning studio engineer who has engineered and mixed some of the biggest rock bands in the world!

Andrew has worked with some of the biggest names in rock, including Green Day, Weezer, Audioslave, Black Sabbath, Metallica, Linkin Park, Hozier and U2. He has also worked with legends such as Johnny Cash, Neil Diamond and Iggy Pop, and indie artists such as Manu Chao, Tinariwen, Duke Spirit, Farao, CRX, Cass McCombs and Blood Red Shoes and mixed Jay Z's '99 Problems'.

He has won three Grammy’s to date, starting with Best Rock Album for the Red Hot Chili Peppers 'Stadium Arcadium', then Album of the Year for Adele's '21', and most recently Best Reggae Album for Ziggy Marley’s Fly Rasta, as well as the International Engineer of the Year Award from the MPG.

I’ll be talking about my experiences with many of the best in the business as well as giving an introduction to my studio techniques including how I use parallel compression when mixing. The session will also involve a Q&A so please bring any burning music industry questions along."

Why will this be such a great class for ICMP students?

Our BA Creative Music Production Programme Leader Jason O’Bryan (who knows a thing or two about engineering and production himself!), thinks this session will be of great benefit for students not just on our music production degree course but also for other ICMP students on songwriting, performance, business degree or diploma courses. Music production and sound engineering are such important aspects of modern music creation and commercial and artistic success that all who are interested in popular music have a stake in learning about this crucial aspect of the process. Jason commented:

[I am] delighted to welcome Andrew Scheps to ICMP. Andrew has worked with many of the world's most respected artists, so this Q&A session will provide an incredible opportunity not just for our Creative Music Production degree students, but for all ICMP students to learn from one of the leading figures in the field of production and mixing."

Details of the event:

When: October 25th 2017
Where: ICMP London
How to register: All Masterclasses are free of charge to ICMP students, so if you have already accepted your place for 2017, or if you are a returning student, then you will be advised nearer the time how to book your place at this event. And if you haven’t yet accepted your place, or if you are considering making an application, then here’s another great reason to choose ICMP to build your music career!