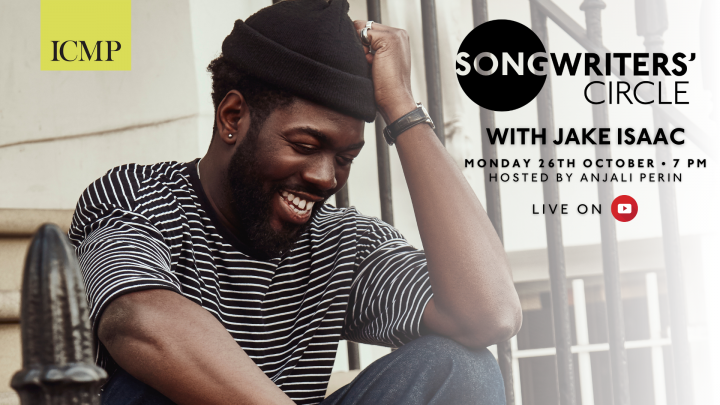 The audience will get an exclusive chance to hear songs stripped back, sung by the writers themselves as well as new material from the most talented songwriting students in the UK.
Open to all, our Songwriters' Circle attracts musicians, music lovers, and industry alike. This is a unique blend of people coming together for one evening along with stunning songs and the stories around them, this is an experience you won't forget.

About Jake Isaac
Born and raised in south London, UK, Isaac began playing drums age 3 and by 19 and had begun to make a living as a part-time session musician playing drums and bass on various jazz and rock records for a variety of international artists, including the Grammy-award winning Duffy.

Marketing manager by day, songwriter and session musician by night, Jake began working with artists such as Cynthia Erivo, Gabrielle, and boy band Blue. Soon after, Jake began to try his hand at writing songs for himself, eventually landing his first major festival opening 'The Other Stage' at the world-renowned Glastonbury music festival. Signing to the iconic Sir Elton John’s Rocket Music, Jake Isaac has since worked with and supported Ella Eyre, Paloma Faith, Angus and Julia Stone, and Elton John himself.

Jake’s distinctive style of singer-songwriter/soul has earned him widespread plaudits as a singer and multi-instrumentalist selling out headline shows in the UK, Germany, USA, Netherlands, and across Europe.

This Songwriters' Circle will include performances by students from all Songwriting courses and will be hosted by songwriting tutor, Anjali Perinparaja.