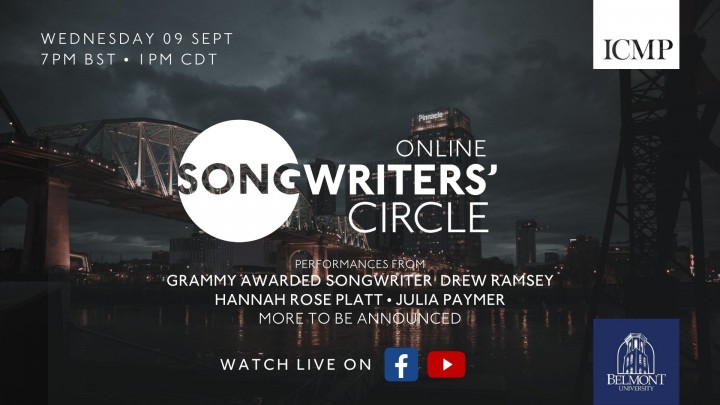 The beating heart of our Songwriting community moves online.

The Belmont University is a well connected University in the heart of Nashville with a driving Songwriting Department, who’s graduates have received major record and publishing deals as well as Dove and Grammy awards and nominations. Every year students from ICMP are flying over to connect and write with students from the Belmont University as well as attending Songwriters' Circles and Masterclasses with high profiled Songwriters.

He has received two Grammy awards (and four other Grammy nominations), one Dove Award, and two Emmys. His songs have appeared in movies such as We Were Soldiers, The Game Plan, Shark Tale, Brown Sugar, and television shows such as The Voice, American Idol, So You Think You Can Dance, Grey’s Anatomy, Dancing With The Stars, Brothers and Sisters, The Fosters, sports events on ESPN, NFL, NHL, and more.

Drew will be joined by his Songwriting student Julia Paymer. Julia is a singer-songwriter that writes pop, r&b, and country music for established artists in Nashville as well as working on her own pop solo career. She also plays bass in two all girl bands that play shows in and outside of Nashville.

The event will be hosted by singer-songwriter and ICMP Songwriting Tutor Hannah Rose Platt. Hannah is a Liverpudlian singer-songwriter, steeped in the traditions of American country music. She has toured extensively in the UK and USA and recorded with Grammy Award-winning musicians. Her latest video ‘Chanel and Cigarettes’ debuted on SKY and Freeview TV, she also performed live on BBC One and was named as a rising independent star on the Americana scene in ‘Billboard’ magazine.

More performers will be announced soon.

You will be able to watch the Songwriters' Circle on both our ICMP Facebook page and our ICMP YouTube channel.