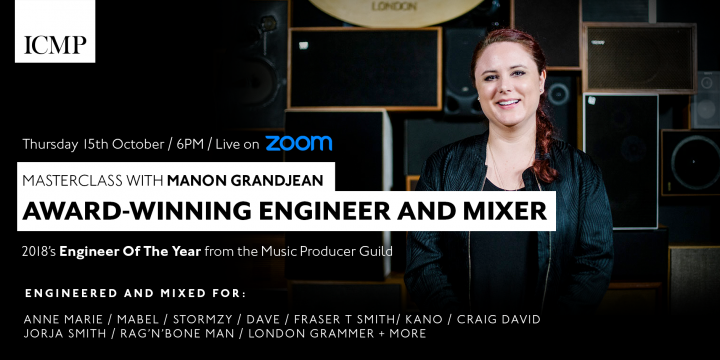 Award-Winning Recording and Mixing Engineer Manon Grandjean will be visiting ICMP for an exclusive Online Masterclass. She will speak about how to set the right vibe in a studio, what do you expect as an engineer from the musicians and how to get the first jobs/sessions. Manon will also go through one of her sessions with us and will answer questions about being a woman in the music industry.

Manon started her career as a runner at Livingston Studios in North London after moving from France to the UK for an internship. In the following years, she was working in different studios before she started engineering solely for multi-award-winning songwriter/producer Fraser T Smith in 2015. During their 5 years partnership, Manon has worked on critically acclaimed and chart-topping albums such as Stormzy’s “Gang Signs & Prayer” and Dave’s “Psychodrama” not only as an engineer but also as a mixer.

During that time, she also engineered and mixed a wide range of tracks for artists like Raye, Mabel, Craig David, Nina Nesbitt, Calum Scott, Gavin James, Kano, Not3s, Easy Life, Jorja Smith, Ramz, Ray Blk, RagnBone Man, Professor Green, London Grammar, Anne Marie, Fleur East, Tom Grennan, and many others. In 2017, Manon received the award for Breakthrough Engineer Of The Year at the prestigious Music Producer Guild awards and went on to receive the award for Engineer Of The Year in 2018.

The event will be hosted by our MA Creative Music Production Programme Leader Jason O'Bryan and students will have the opportunity to ask all questions in an interactive Q & A.