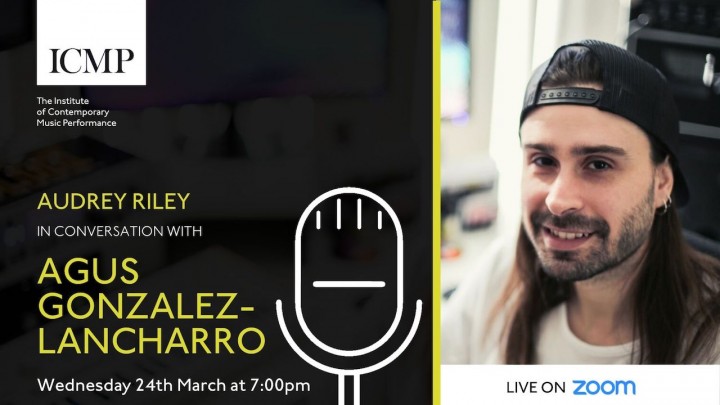 We're excited to announce this new episode of our 'In Conversation' series. This event will show Audrey Riley in Conversation with Agus Gonzalez-Lancharro.

Agus was born in Barcelona and spent a long time in the UK building a music career, where he also studied a degree in Guitar Performance (ICMP/UEL) and a Masters in Composing for Film and TV (Kingston University). Agus shared staged time and tours with the likes of Rick Altzi (Masterplan/Gathering of Kings), Alex Landenburg (Stratovarius, Kamelot, Annihilator) and recorded under the production of Andy LaRocque (King Diamond) in his studio in Varberg (Sweden) among others.

In 2013, Agus started his music production company: Really Slow Motion. Writing alone, with other writers and producing and publishing all that material by himself, Really Slow Motion ́s music has been featured in over a thousand movies and TV shows for the last 8 years, including all the new features of the Star Wars saga, Game of Thrones, Jurassic World, Pirates of The Caribbean, Transformers, many Superhero movies etc…

Agus also contributed as a music producer for soundtracks such as Beauty And The Beast (2017), Mulan (2020). Besides his work with Really Slow Motion and after relocating to Los Angeles, California, now he is expanding his new ventures to the Rock/Metal scene putting songs together for his brand new Progressive Metalcore band soon to be unveiled.

The event will show him in Conversation with Audrey Riley. Audrey is composer, cellist, arranger, and conductor with close to 200 album credits to her name. For over two decades, she has worked at the very highest levels of the music industry producing an exceedingly diverse body of work, from conducting the orchestra of La Scala in Milan to playing cello with Blur, Nick Cave, and the Foo Fighters.