Blues Guitar Styles 101 - Learn at your own pace

Learn six iconic blues guitar styles in this step-by-step practical course. You’ll take each module at your own pace and be introduced to the history and key techniques of each blues style by influential guitarist Justin Sandercoe. Open now for enrolment, and you can commence any time.

Blues Guitar Styles 101 - Learn at your own pace GOT A QUESTION?

Home » Blues Guitar Styles 101 - Learn at your own pace

The course is made up of six modules, each with a focus on the language, history, technique and rhythms for the essential blues styles of the Texas Blues, Chicago Blues, Memphis Blues, West Coast Blues, British Blues and Late Texas Blues.

You can take each module at your own pace, going over the materials as fast or slow as you require. As well as learning about the history and technique for each style, you’ll also be introduced to two of the genre’s key guitar players – giving you a comprehensive understanding of each style and its most famous players.

Once you’ve finished the six modules in this step-by-step course, you’ll have practical knowledge and authentic skills – and sound like you’ve been playing the blues for years!

Module 1: Discover the dynamic ‘Texas Blues’, a style characterised early on by jazz and swing influences and later by blues rock and Southern rock. You’ll learn how and when to use a looper and be introduced to legendary licks and rhythms from Freddy King and Lightnin’ Hopkins.

Module 2: Known as having one of the most significant influences on early rock music, ‘Chicago Blues’ inspired some of the biggest 1960s beat groups, including the Rolling Stones. You’ll develop an understanding of blues curls and be introduced to the licks and rhythms of Chicago Blues legends Muddy Waters and Hubert Sumlin.

Module 3: The ‘West Coast Blues’ style evolved from the many Texas Blues players who relocated to California in the 1940s and is influenced by jazz and jump blues. You’ll discover blues bending techniques and be introduced to the distinct licks and rhythms of the towering West Coast Blues guitarists Johnny Watson and T Bone Walker.

Module 4: An important blues genre originating in the Deep South is the ‘Memphis Blues’, a strong and early influencer of ‘Rhythm and Blues’ (R&B) music. You’ll be taught more extreme bending and be introduced to the licks and rhythms from the ‘Kings of the Blues Guitars’, Albert King and BB King.

Module 5: Bringing the Blues to more mainstream audiences, the ‘British Blues’ was derived from the American Blues in the 1960s. You’ll get an introduction to the licks and rhythms from British Blues legends such as Peter Green and Eric Clapton, plus learn blues guitar vibrato techniques to practice and master.

START AT ANY TIME! 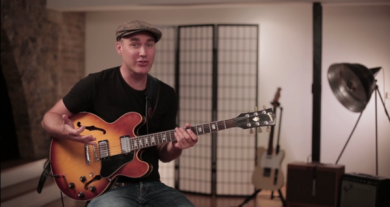 Justin Sandercoe is a UK-based guitarist who is one of the world’s most influential guitar teachers. He has produced thousands of online guitar lessons and inspired millions of guitar players for the past 20 years. Guitar legends Brian May, Mark Knopfler and Tommy Emmanuel have all applauded Justin’s teaching style and lessons, recommending him for his comprehensive, inspiring lessons and deep insight and knowledge of guitar. He has also taught several face-to-face classes for ICMP and regularly contributes to well-known guitar magazines.

This course is suitable for guitar players who are at least ‘foundation’ to ‘lower intermediate’ level. To make the most of the six modules, you should be able to play a solo using fundamental techniques and also perform chord and riff-based rhythm guitar parts.