For ten of today’s most successful musicians inspiration isn’t necessarily that far away. Their approaches may just surprise you, whether you’re stuck on where to find inspiration for music or are just curious about their creative processes... 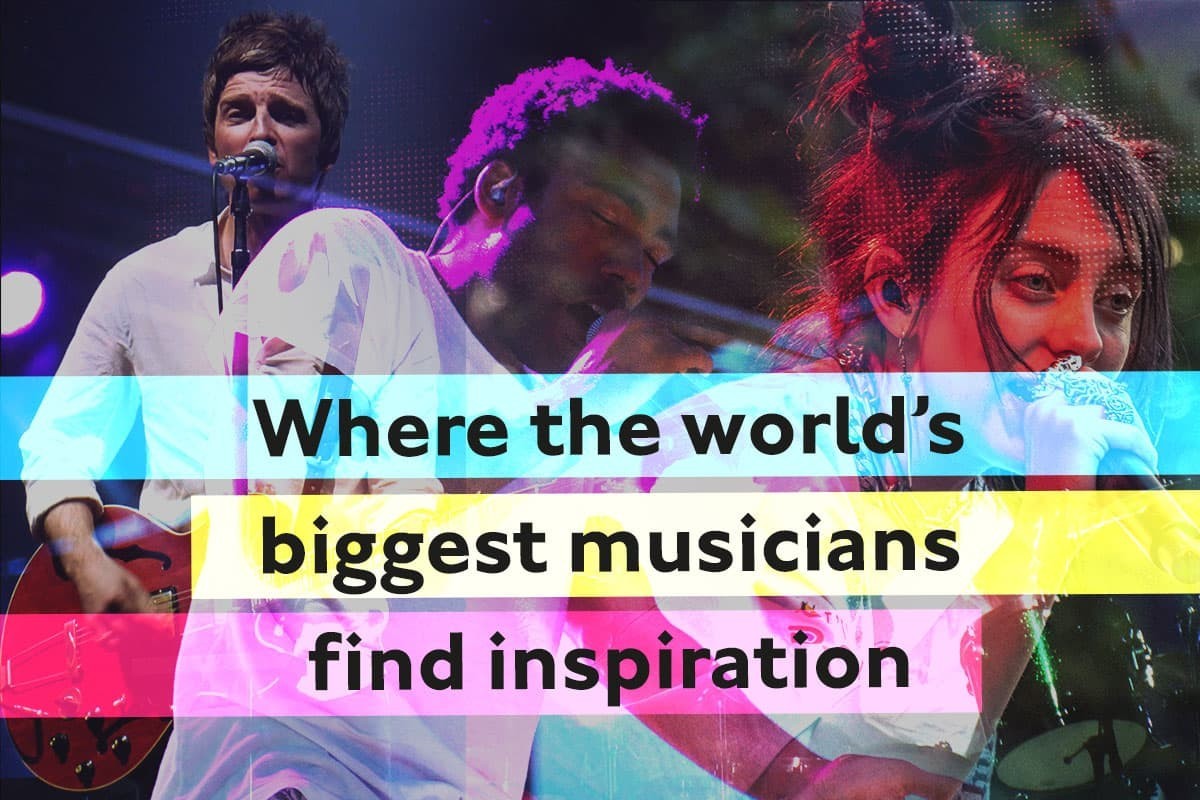 Creativity, the muse, vision, inspiration – however you term it, it can often be in short supply. Many musicians will agree this is a frustrating reality of their working lives. But the good thing is that there are always ways around it.

For ten of today’s most successful musicians inspiration isn’t necessarily that far away. Their approaches may just surprise you, whether you’re stuck on where to find inspiration for music or are just curious about their creative processes.

For teen superstar Billie Eilish, who writes and makes music with her equally talented brother, Finneas O’Connell, inspiration can strike any time – even when she’s asleep. “When I have a crazy dream, or I just have a thought in the middle of the night, I will sit up, whether the light is on or whether the light is off, I’ll sit up and I’ll just write whatever I’m thinking or whatever I just dreamt about,” she says. 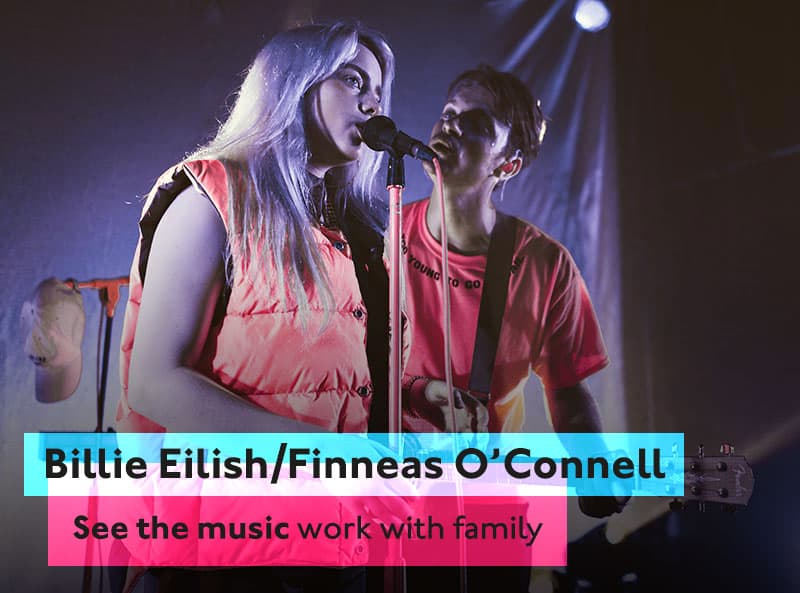 Billie has synaesthesia – a condition in which stimulation of one sense causes an involuntary reaction in at least one other. For Billie, seeing and hearing are inextricably linked – she literally sees the music – and this helps her keep the bigger picture front of mind when she sits down to work on a new song. Billie has said: “Any time I’m creating anything I’m thinking about the video, I’m thinking about the artwork and I’m thinking about the colours… Everything that I make, I’m already thinking of what colour it is, what texture it is.” The complete package.

While it may be difficult for some of us to imagine working with a sibling, working together helps the musicians’ inspiration. Says Finneas: “Probably 75-80% of the songs are written with us sitting next to each other at a piano or with a guitar, singing a melody together. It’s like a relay race — we really feel like we both have to kill our portion of it to get to the finish line.”

For Sia, making music is like breathing. Fuelled by emotion, the deeply introverted musician seems to weave a story of heartbreak or survival into almost every song; from ever-encouraging ‘The Greatest’, said to be about the 2016 Orlando nightclub shooting, to the chart-topping ‘Chandelier’, inspired by her own battle with alcoholism. 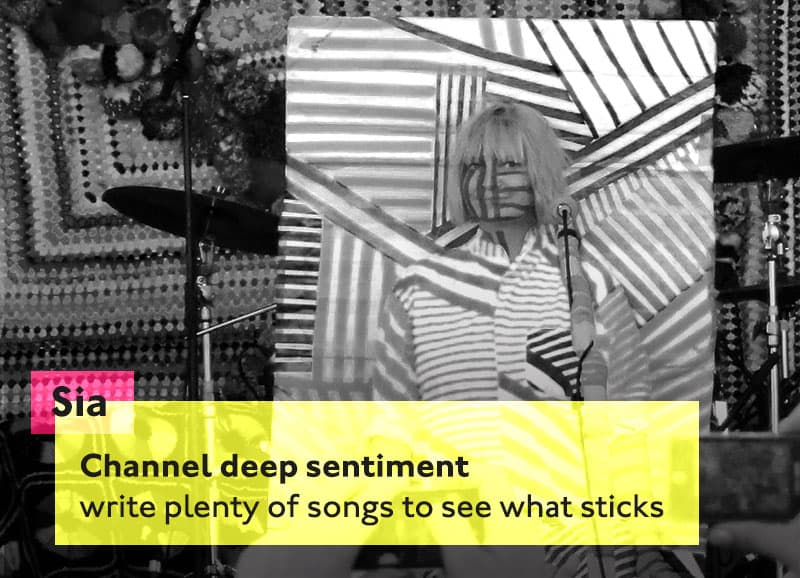 While she certainly isn’t the first to do this – if asked where do musicians find inspiration, most artists would probably describe an emotion of some kind – Sia certainly has a gift for it.

She’s a prolific songwriter, penning tracks for Rhianna, Katy Perry and Beyoncé, as well as herself. She writes quickly and abundantly, identifying gems in her plentiful output. “I love the idea of how fast can we make the song,” she says “but I don't think that I'm necessarily, like, a super-talented songwriter. I think I'm just really productive. One out of ten songs is a hit.”

As for Sia and many other musicians inspiration strikes Ed Sheeran as a way of healing through song. In one interview, he said: “Songwriting is a really weird thing. ’Cause I think it works as some sort of therapy for me, anyway. Like, I think I've stopped myself going mad by writing songs.” 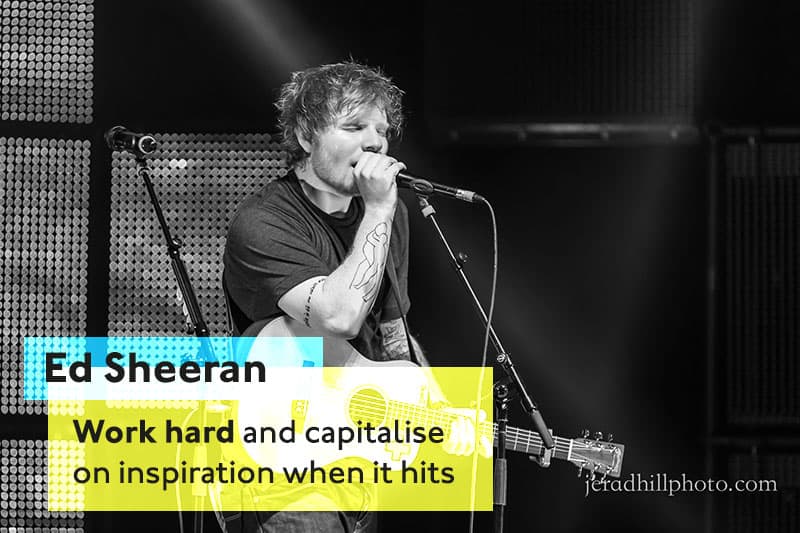 He’s another to seize the moment and respond to inspiration immediately as it arrives – because who knows when it will strike next. In his Songwriter documentary, Ed commented: “Songs are weird things. They just come and go. They never give you any warning.” He welcomes them when they turn up, knowing they might not be so accessible if postponed. “I'm never, like, in a mood for longer than a day. But in that day, if I happen to write a song, that song exists forever.”

Having such ideas pop into his head spontaneously certainly doesn’t equate to lack of work ethic, though. Sheeran is known as one of the hardest working in the business. “I feel lazy when I'm not working. Like, when you finish a show and then you're on a bus, and you're like, ‘Well, I'm not doing anything for the next three hours, I'm either going to watch a DVD and drink a bottle of wine, or I can write a song. Or two or three,” he says.

When you’re wondering where to find inspiration for music, take a leaf out of Noel Gallagher’s book. For him, the creative process is about being patient – a quality that may seem at odds with his fiery public persona. 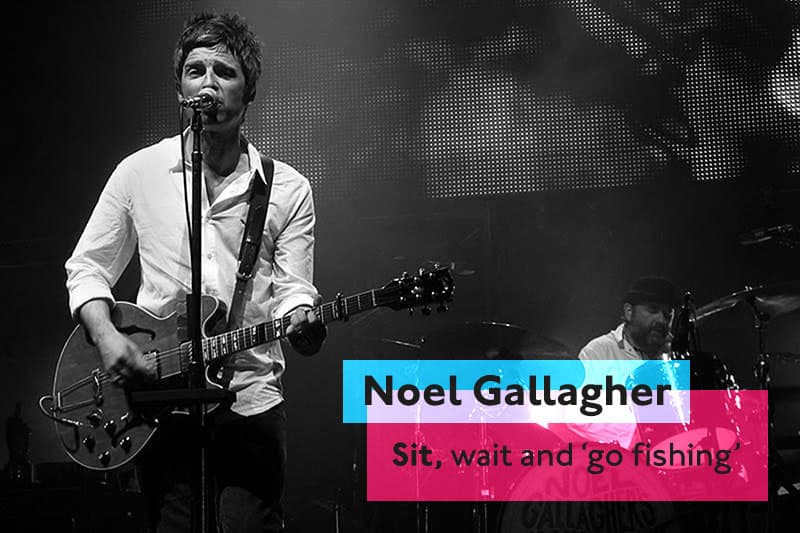 He has written a wealth of enduring hits for Oasis, among other outfits, but his process is slower than some – due, he has said, to his dyslexia and inability to read or write music. He refers to his approach to songwriting as “going fishing” and has said: “All I can do is sit with a guitar and wait and hope for something to happen. And that’s what I do. I sit by the river and if I get a catch, great… I try to write great songs. Sometimes it happens. Sometimes it doesn’t. I like the discipline of that.”

Aphex Twin, aka Richard D. James, is another artist who doesn’t read music, but this in no way affects his ability to tread new ground and expand his mind. And this is what inspires him. In a Pitchfork interview, he said: “It's all about frequencies and what they do to you. That's the real core. Forget all the equipment, forget the music, it's just literally frequencies and the effects on your brain. That's what everyone’s essentially after.” 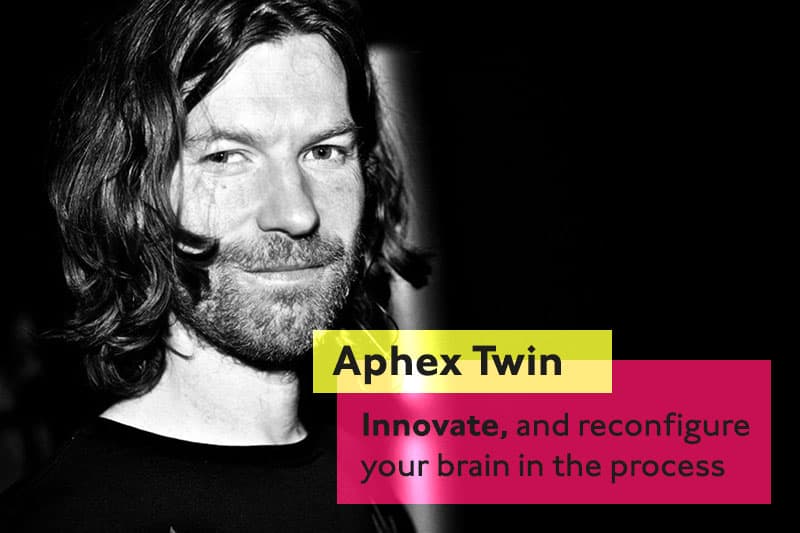 Regarded as “the most inventive and influential figure in contemporary electronic music” by The Guardian journalist Paul Lester, Aphex Twin is constantly innovating. “[If] you hear a chord that you've never heard before, you're like, ‘huh’ and your brain has to change shape to accept it,” he says. “And once it's changed shape, then you have changed as a person, in a tiny way. And if you have a whole combination of all these different frequencies, you're basically reconfiguring your brain. And then you've changed as a person, and you can go and do something else.”

“It’s a constant change,” he adds. “It could sound pretty cosmic and hippie, but that is exactly what's going on.”

Unquestionably one of the most influential musicians of recent years, Chris Martin is nothing if not disciplined. Coldplay apparently has ten band rules to adhere to – rule #4 Computers are instruments, not recording aids – and Martin has been referred to as ‘a compulsive worrier’ and ‘openly neurotic’. 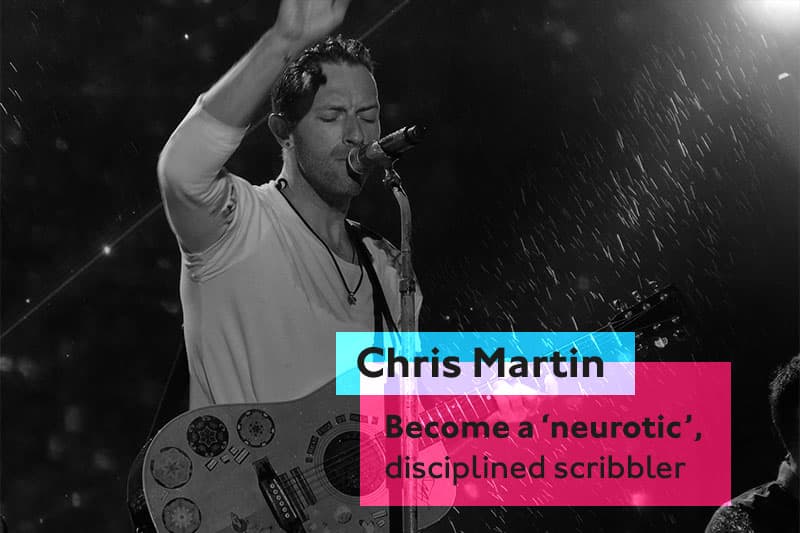 Needless to say, this isn’t a bad thing creatively and it more than works in his favour. Inspiration lands because he simply doesn’t let an idea go. He records every thought and makes list after list.

“He sends himself electronic messages, and scrawls notes on scraps of paper, on his hands, and anything else that’s available, lest he forgets some brilliant idea,” said news journalist Steve Kroft. Martin even scribbles on his piano with a Sharpie, repainting it once the project is finished.

Alicia Keys and her husband Swizz Beatz share a studio to offer each other a creative leg-up. The Grammy Award-winning duo admits they each have different approaches to producing music, but find benefits in working side by side. For these musicians, inspiration is never far away. 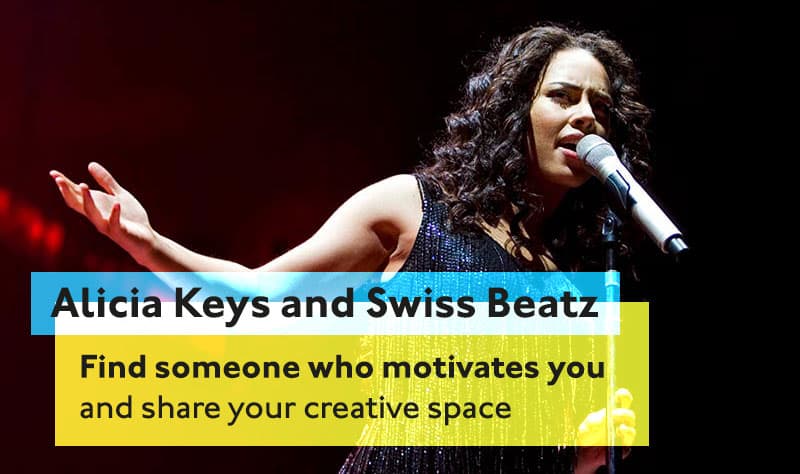 “It’s actually totally casual. It’s very cool,” says Keys. “We’re very different from each other. Totally night and day just in how we kind of conceptualise creative moments. And so his is one particular style and mine is another and it’s really cool to allow them to infuse with each other and kind balance off of each other.

“Because we know each other so well, and we’re very comfortable with each other, it allows it to flow in a way that’s really cool. It’s not a relationship or a way of creating that I would have with anyone else. It’s actually really fun. He brings a lot out of me that I probably wouldn’t find. And same on his side!”

Jack White, best known for his work with The White Stripes, isn’t one to sit around and wait for inspiration to hit. He’s said to treat music-making like any other job, showing discipline, making himself write, and booking time in the studio regardless of his level of motivation. 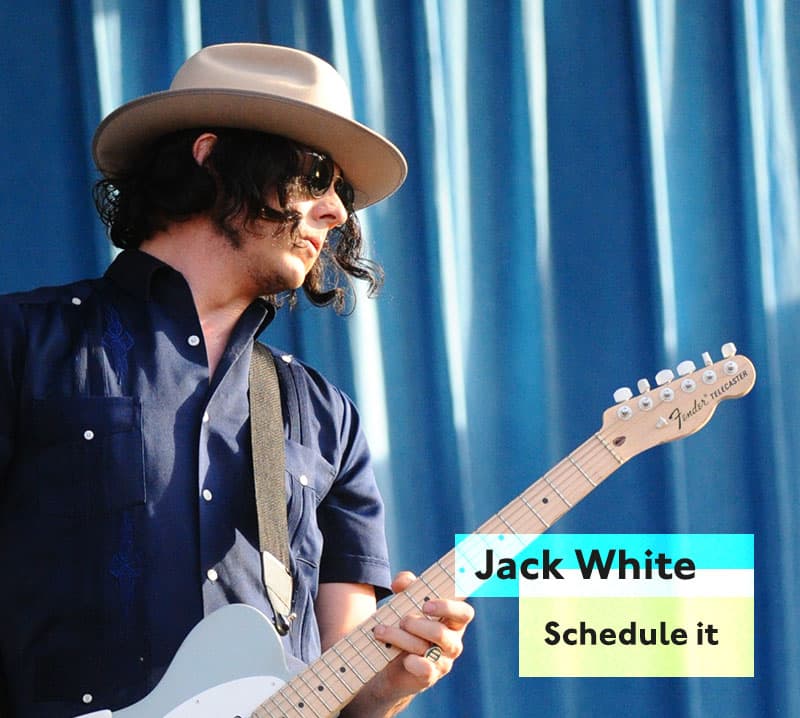 “Not every day in your life are you going to wake up, the clouds are gonna part and the rays are gonna come down and you’re going to write a song from it,” White has said of his almost old-school work ethic and approach to daily practice. “Sometimes you gotta just get in there and force yourself to work and maybe something good will come out of it.”

“I always have my own rules, and I can bend them if I want,” White said in another interview. “I’m disgusted by artists or songwriters who pretend there are no rules. There’s nothing guiding them in their creativity. We could’ve spent six months making our last album. We could have recorded 600 tracks. Instead, we went and made the whole album, 18 songs, in 10 days.”

The rapper, writer, singer, actor and producer, otherwise known as Donald Glover, has said he works from his home in an empty room: “I wake up every morning and I start grabbing things – spray-painting the walls, recording, writing,” said Gambino. “They’re all connected for me. It’s all about trying to get to the bottom of what being a human is.” 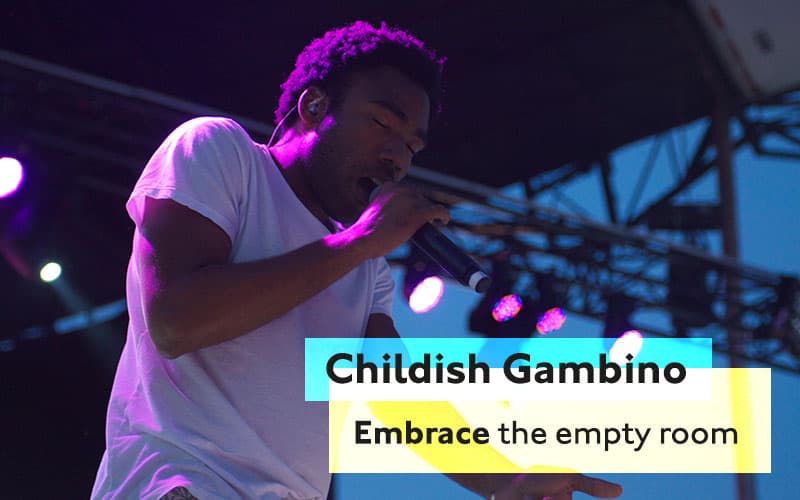 Where do musicians find inspiration? For Ella Yelich-O’Connor – better known by her stage name Lorde – the answer was the Big Apple. To record her album Melodrama, Lorde moved to New York and relished the opportunity to feel anonymous in a sea of strangers. 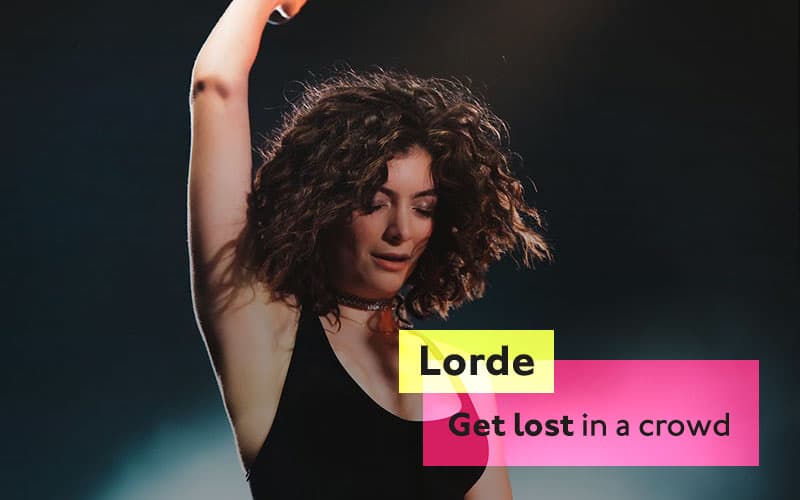 She has said of the process: “There's this great Virginia Woolf quote [where] she talks about how wonderful it is to go out on the street in the city between the hours of four and six and be part of this sort of swell of commuters and how wonderful that anonymity is. And yeah, I really felt that helps the work immeasurably, to be sort of walking around with my MetroCard, working it all out.”

She would often write on the subway, near-invisible amongst the throng, and has said she felt like “a little monk, drifting down into the subway, being very solitary”. She’s also spoken of its rejuvenating effects in several interviews, and posted the following comment on Facebook: “I’d ride across the Brooklyn Bridge every day, or sit on the subway uptown in the heat, then go back home to New Zealand winter for a week at a time to party with my friends. My life was like a weird little etch-a-sketch I kept scribbling on and resetting.”

Call our friendly Admissions Team on 020 7328 0222 or email enquiries@icmp.ac.uk to start your career in music today.

by ICMP staff writer
May 18, 2020
Amplify your career
Back to Blog Home