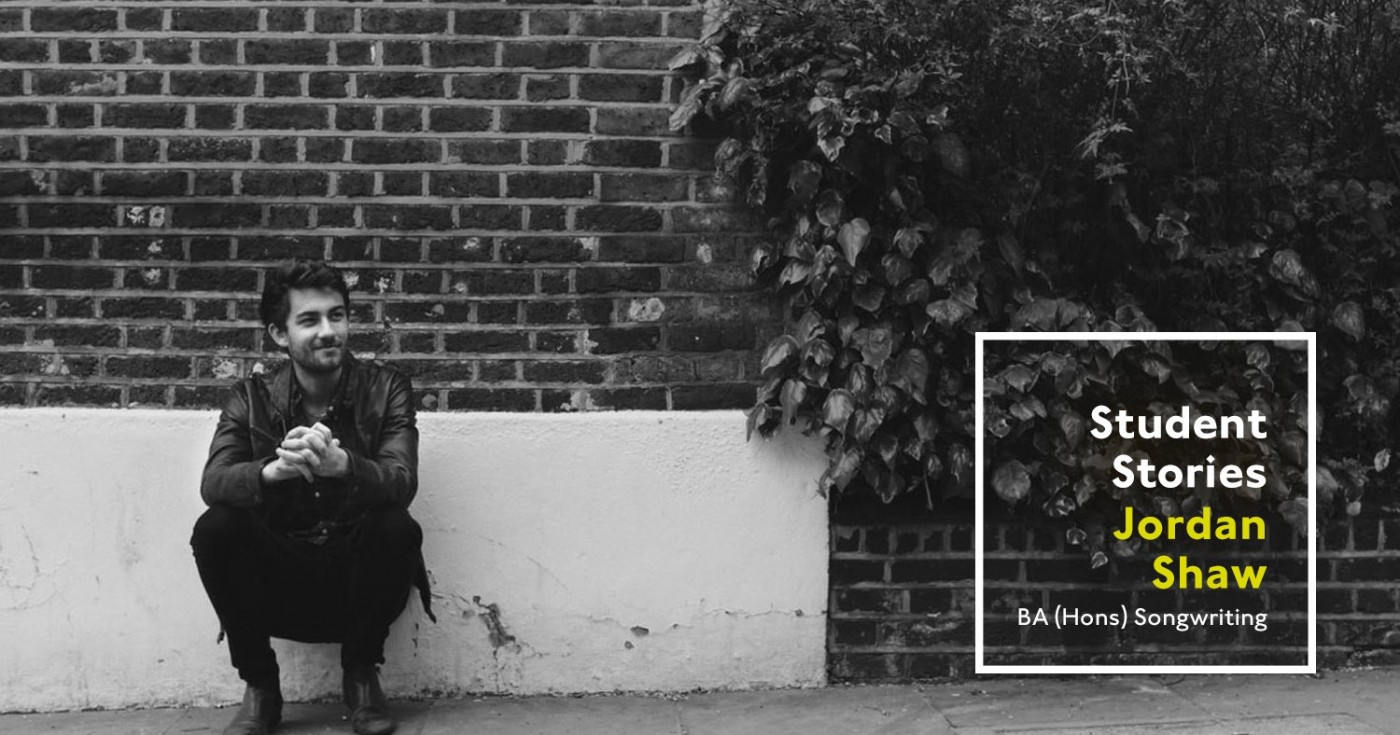 Singer songwriter and ICMP BA Songwriting alumnus Jordan Shaw is one of our most exciting success stories.

Since signing a deal with publisher Phrased Differently in the summer of 2018, Jordan has been a regular in sessions across the capital, working as a producer and songwriter with an array of burgeoning talent.

It’s his latest cut on Armin van Buuren’s ‘Something Real’ track in July that has recently elevated his career to a new level. Featured on the song as well as performing it in Ibiza on a weekly basis over the summer, the song has clocked up millions of streams to date and bodes well for a string of forthcoming releases.

I went to a performing arts school when I was a teenager. I was initially into musical theatre but I fell in love with the idea of songwriting. I had only written two or three by the time I came to ICMP. On an Open Day, Jonathan Whiskerd told me about the songwriting course, writing three songs a week, one a co-write, one to a brief and one an open solo. It was perfect for me as I wanted to take it seriously for three years, throw myself in and this felt like the right place to do it. I couldn’t have made a better choice.

I was taught by Jonathan, Dan Green, Julian Marshall … they were all fantastic - the one thing I’ve realised is that you can be really proficient at what you do but this doesn’t necessarily make you a good teacher. But everyone who taught me at ICMP was just as good outside the classroom as inside it.

They’re all present in the industry but calm and collected in how they deliver classes. I grasped plenty of key concepts and ideas from being around so many talented people.

What were pivotal moments while at ICMP?

Everything I do now goes back to ICMP. I met my publishers during first year - so Hiten [Bharadia] who runs Phrased Differently, he was part of a lecture on publishing, royalties and songwriting. He was really interesting and from then on, I had them on my radar.

I was 3/4s of my way through my third year when I went to James Brister in the Hub and asked him if he could help me send a showreel around. He did and within three days we’d had a response from Phrased. We had a meeting and I started to work with them. I’d get sent some tracks, then I’d make sure I’d respond within a day or two. I constantly made sure I was there in the inbox. The track briefs turned into sessions, which turned into writing with the roster, which led to a Kygo show at the O2 as Phrased publishes Justin Jesso. He sings and wrote ‘Stargazing’ for Kygo. On the night, they told me I was getting offered a publishing deal which was unreal.

After news of the deal, I went to James again and told him I didn’t have a team in place and asked if he knew any lawyers who could help me out. Of course James said yes and introduced me to my lawyer George Hyde. He helped me negotiate my whole deal and talked me through the intricacies. I signed and a year and a half later, here we are…

What does a publishing deal mean for a new artist?

There are many ways publishers can work with you. Signing to someone like Warner Chappell, it’s a big business with lots of different writers whereas Phrased are a smaller operation.

From the start, Phrased were very open about how they wanted to develop me - they signed me off a zero track record. They were taking a big risk on me but they went for it. It made me feel very reassured as a writer and it felt like something I wanted to be a part of from the start."

Before this, I had no team - I still have no manager - because Phrased are so hands on with me. If I look at myself now to a year and a half ago, I was scrolling down Spotify's New Music Friday playlist and I know so many of the writers, artists and producers behind so many of the records.

I’ve just come back from playing the Untold Festival with Armin van Buuren off a record we’ve just released. We were on stage at five in the morning, the rain was pouring down, singing ‘Something Real’. It was surreal and it takes moments like this to realise what you’re doing, where you’re are and look back at the progression.

What releases or songwriting cuts have helped you take the biggest step forward in your career?

The Armin track has been a big one for me. I got the track and toplined it with Andreas Moe who is also on Phrased. Armin heard it and said he wanted to be part of it. I vocaled it and thought he’d get a big guest in on vocals. I didn’t hear anything back for a few weeks, then they started talking about release dates. I thought they’d missed a step but turned out they wanted me on it.

We got the email asking if we’d like to keep my vocal on it. I spoke to my publishers and thought: ‘What do I lose if I go on it?’ If the record doesn’t work, then I could always start an artist career under an alias. Plus, as it’s an Armin Van Burin track, it will do five or six million streams as it is. But it’s been great. I’ve been touring for the last five or six weeks, playing in Ibiza every Wednesday at Hi which has been amazing. We’ve also just performed at the Untold Festival in front of 70,000 people in a stadium. It’s all happened very quickly. It’s taken my career in a different lane.

How do you adapt your writing for each track/project?

Every room you go into is different in terms of the skills in it and where you’re sitting, whether it’s as a writer or producer. For me, I like being able to give these two different perspectives. I can be more malleable in the studio setting and not be too tied to one role.

I’ve been lucky enough to travel a lot with my writing. I’ve been to Nashville with ICMP and met people out there as well as in Copenhagen and Sweden on some European writing trips. Everyone in different countries have different styles. But ultimately, I like finding effective partnerships. It’s important to find those who get on with and write well, those who you get on with but perhaps don’t write so well with. You need to find your team.

For anyone at the start of their session career, you need to react to the room. You sometimes talk for an hour before you write anything - so be really open, relaxed, don’t feel any pressure to come out with anything. Keep your ears open to the lyrics and music."

The best songs I’ve written I’ve had fun with, they’re born out of good chats and jokes. It’s about having fun more than anything. I treat it as a constant learning curve.

What would you be your top advice to any ICMP students?

Don’t be scared of a journey over the three years. When I started, I was a keys player and guitarist. I wrote a lot of folkie songs with complicated guitar parts. By the end I was a pop writer/producer. So it was quite an arc but ICMP let me find that and facilitated my learning. I wouldn’t be here now without the guidance and support I had at ICMP.

Find your unique identity as a writer on the BA (Hons) Songwriting programme. You'll develop your ability to craft and refine songs in a range of styles, whilst also developing and improving your technical, musicianship and entrepreneurial skills. Speak to our friendly Admissions Team to learn more about this programme, call them on 020 7328 0222 or email at enquiries@icmp.ac.uk.