Our Songwriting alumna tells us how she made chart history with country pop duo Ward Thomas and more... 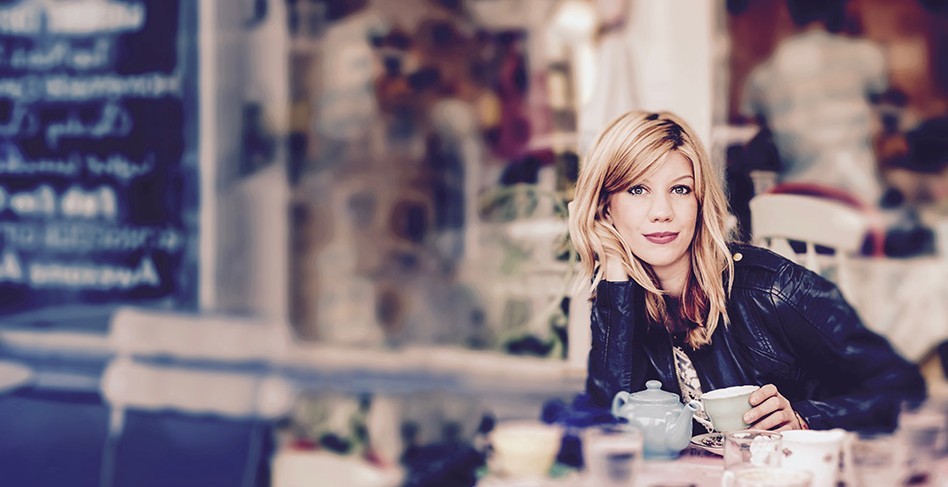 Making songwriting history isn't something every musician can lay claim to.

So hats off to our Songwriting alumna Jess Sharman. She helped British country duo Ward Thomas break records with their second album 'Cartwheels' becoming the first ever country album to reach number one.

It's just one of an ever growing list of great achievements for Jess. Her tracks have been synced for film ('The Inbetweeners 2' ) and TV ('Made in Chelsea') while she also collaborated on a number of co-writes for Ward Thomas' latest top ten album, 'Restless Minds'.

We caught up with Jess ahead of the album's release to learn how her time at ICMP helped prepare her to make waves within the music industry and more...

I always played music, had always written my own songs but my writing was limited to my feelings. So when I felt a certain way, if I’d had my heart broken, then I’d write a song about it. I didn’t know anything about writing songs on demand or just working purely as a writer.

But I hated performing as I’d get so nervous. I was travelling writing and playing and someone urged me to pursue music more seriously. I told them about my nerves and they suggested I should get someone else to sing my songs.

It really inspired me to investigate more so when I returned, I researched songwriting courses and found ICMP.

What were the big things you learned from your studies?

I learned how to write on demand, experience which is invaluable in the world of professional songwriting. I would be writing three songs a week alongside studying music business and the history of songwriting. It was a very intense period of study! But music school is a great environment to start off with."

Writing in different genres as well as learning about the theory and history of music was really exciting.

What was the best piece of advice you received while studying?

Simon Aldridge who is now at PRS for Music was at BMI back then and he came to visit ICMP. He gave a talk and I asked him for advice. He told me: ‘Every day you hold on the ladder, someone else will fall off’. It really struck a chord with you me. You need to be dedicated to make it work.

How important is learning the business side of the industry alongside music?

I really loved doing all the music, but everything else that went with it too. For example, learning about PPL and PRS royalties. It made me a better songwriter as I became more savvy about everything involved to succeed.

You need to set yourself up as a small business. It’s not just an artistic calling. Treat yourself as the CEO of your company. Knowing this is as important as knowing how to write incredible songs.

For me finishing my studies was only the beginning of my journey. So after completing my time at ICMP, I said yes to everything: any networking events I’d be at, if a topliner was needed I’d apply, I went around production houses with my CV.

Real success happened about two years after I left. I was working a variety of jobs alongside music and was at a party with some people working in finance. They asked me what I did, I told them and one asked me: ‘What’s your Plan B?’ All the confidence drained out of me. But someone turned round to him and said: ‘What’s your’s?’

There’s an element of risk with every job, not just in music. Your company could go bust, you could get asked to relocate. My attitude completely changed and suddenly things started to go well. People who focus on their Plan B to make their Plan A come true end up pursuing their Plan B. Which sounds obvious but can be hard to see when you’re in the moment."

You’ve enjoyed great success with country pop duo Ward Thomas. How did you end up working with them?

I went on a songwriting trip to Nashville. It was great and made me focus on songwriting as a way of telling a story, thinking about why people should care about it and what you can communicate in three minutes.

I met some incredible people on the trip but after that we did a show at Tileyard and performed the songs we had written. The Ward Thomas girls, Catherine and Lizzie, were at that, we got chatting afterwards and we ended up collaborating together on a second trip to Nashville. This was in 2013 and ‘Cartwheels’ didn’t get released until 2016. So it’s quite a long period of writing. But you have to work at these relationships. I was lucky to meet them when I did as we went up the ladder together. But I knew from the start that I believed in them and our songs.

How has the relationship developed?

Well this latest album was a fully fledged Sony release. Suddenly there were lots of people telling us what to do, who to work with. So it was incredible for the girls to continue working with someone like me.

There is some pressure with writing a follow up but it’s hard to know where it comes from. As long as you can say you tried to create the best work possible, then you know you’ve got a good record on your hands.

I’m working with the Sea Girls, a really great new band - it’s cool for me to be working in a different bracket. I’m in the process of writing a musical exploring a whole world of different genres… it’s a man telling his life story from the sixties through to the nineties but each song defines the era - which is quite challenging to say the least! That’s a new way of working my songwriting brain. Plus general writing sessions which is what I love and what I do all the time...

Visit jessicasharman.com to find out more.

Study a Songwriting degree in London

by Jim Ottewill
April 30, 2019
Creators
Back to Blog Home