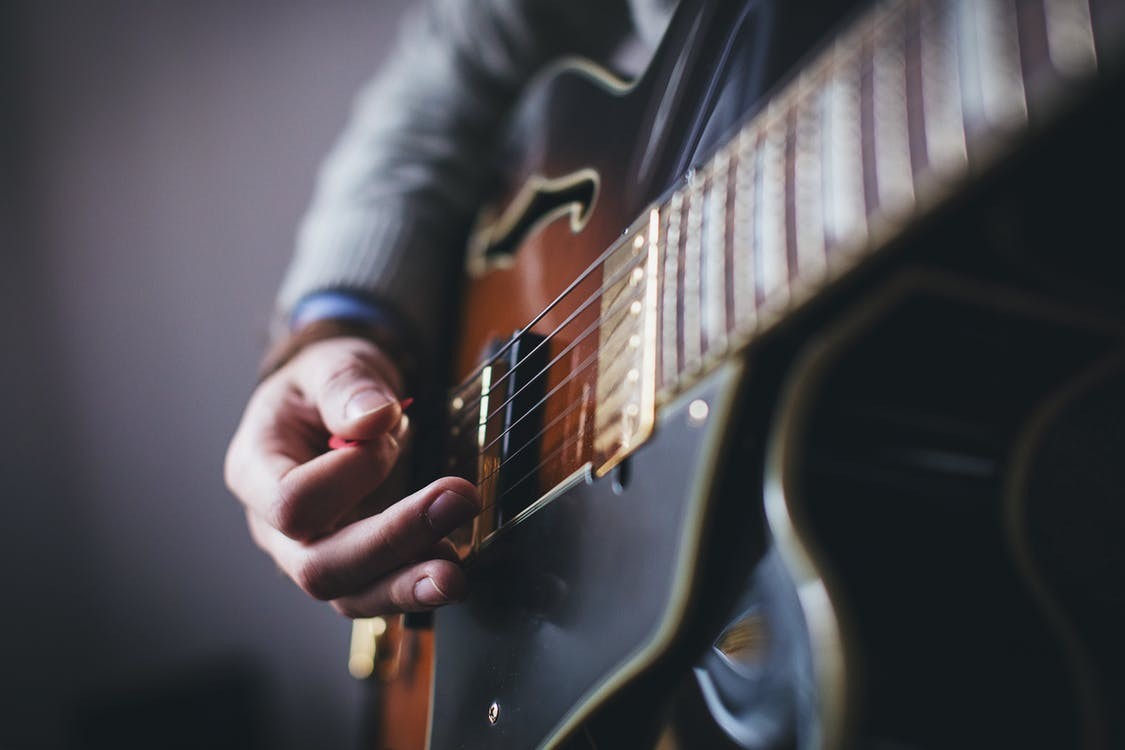 Ever wondered who played that killer guitar solo on a track?

Our guitar degree course tutor Rich Perks is an expert when it comes to guitars, riffs and rock and has put together this ace playlist for us. In his selection, Rich chooses the ultimate selection of rock guitar guest appearances for some big hits, unearthing some surprising players in the process. Read, listen and turn his selection up to eleven...
Michael Jackson - ‘Give In To Me’

From the studio album ‘Dangerous’, ‘Give In To Me’ features the raw, energetic guitar playing of Slash.

With his classic Les Paul, Burstbucker tone, Slash performs complementary rhythm guitar melodies throughout, before embarking on an eagerly anticipated solo. This tune was released in 1993, reached number on in New Zealand, and number two in the UK charts. For another example of Slash’s “session chops”, check out ‘Always on The Run’ by Lenny Kravitz.

From the album of the same name, David Bowies 1983 mega-hit 'Let’s Dance' reached number one in many countries around the world. The main man on guitar (and producer of the track) needs no introduction, Mr. funk-disco himself, Nile Rodgers. What you may not have already known however, is that the guitar solo in the outro was performed by an upcoming, twenty-nine-year-old guitar player from Texas, Stevie Ray Vaughn; who often cited this performance as a defining moment in the development of his career.

When your enormous-haired, virtuosic lead guitarist Adrian Vandenburg sustains injury, and you need to find a suitably outrageous replacement to finish recording the new album - and conduct a world tour - who ya gonna call? … Steve Vai - that’s who! The whole album 'Slip of the Tongue', features an accomplished - and far from shy - Vai, delivering a succession of ‘face-melters’, one after the other.

This album was released in 1989, just prior to him recording 'Passion and Warfare' (and if you listen carefully you can hear early incarnations of phrases which feature later in his own work). This track was listed as it showcases a few different playing styles, but really, if you’re a Vai fan, anything from this album will make you smile. For more examples of Vai’s session work check out albums: 'Eat ‘em and Smile' and 'Skyscraper' by David Lee Roth, as well as Alice Cooper’s single 'Feed My Frankenstein'.

From the 1991 album 'Innuendo', the title track comprises a rock-odyssey of ‘riffage’. Brian May performs his classic lines, and injects the obvious ‘Queen’ character, but in the middle, something less usual happens; There is an extended nylon-stringed ‘flamenco’ guitar interlude played by British prog rock extraordinaire, Steve Howe from Yes. As the track continues, May takes the back the reigns and erupts into an almost ‘Zepplin meets Maiden’ second guitar interlude, before resuming the main theme.

Known for beautifully crafted songs and the seamless merging of jazz, pop and rock harmony, Steely Dan are as good as it gets. 'The Royal Scam' was released in 1976, and the opening track contains a, nothing less than incredible, guitar solo performed by jazz-fusion master Larry Carlton. Apparently, this was recorded in a single take, and Larry has confessed that he can’t remember what he was thinking when he played it, as he thought it was just a ‘play through’ before the recording would start. This solo is often cited by guitar aficionados as one of the greatest fusion guitar performances of all time.

As ‘shred’ rock intros go, this has to be one of the most intense! Starting with a click, the eleventh track from album 'Pornograffitti II', opens with metronomic neo-classical madness performed by Dweezil Zappa - affectionately entitled ‘Flight of the Wounded Bumblebee’ later by the band. Nuno then continues with intense rhythmic lead lines and an arpeggio busting solo - just in case you’d not heard enough notes by that point.

Okay, so you probably know this one already, but no list of rock/pop guest sessions would be complete without Mr. Van Halen’s contribution to Jackson’s 1983 'Beat It' from the album 'Thriller'. As guitar solos go, this is often referenced as the paragon example of rock/pop overlap. There is even a story that the sound of Eddie’s guitar caused a control room monitor to catch fire whilst mixing!…in addition, and lesser-known, is that all the other guitar parts were recorded by guitar legend - and member of Toto - Steve Lukather … Rock!

Often incorrectly presumed to be Ritchie Sambora, the solo from the title track from Jon Bon Jovi’s 1990 solo album, is performed by none other than Jeff Beck! This track reached number one in the States, and once again Beck demonstrates why he’s the ‘guitarist’s guitarist’, playing bluesy slide and whammy bar lines, which come together to form a perfectly crafted 30 second rock/pop solo. For more examples of Jeff Beck’s session work, I’d need a longer word count; I suggest you do some research here though, as his discography is longer than the average Dickens novel!

Berlinda Carlisle - 'Leave a Light On'

Ok, so I thought I should put an unlikely one in this list somewhere! Somewhat more pop-rock than rock-pop, this 1989 track is typical Carlisle pop-tastic fun. What’s not typical however, is the guitar solo, performed by - yes really! - The Beatles’ very own George Harrison! Once you know this, it becomes immediately obvious, as Harrison characteristically performs a great melodic solo, with his unmistakable ‘fuzzy’ slide sound.

This parody rock band reach acclaimed heights with their movie (or ‘rockumentary’) 'This is Spinal Tap' in 1984. In 1992, they released the album 'Break Like The Wind', and the title track contains an epic guitar solo/battle featuring several notable guitarists: Jeff Beck, Steve Lukather, Slash and Joe Satriani (More guest guitar appearances happen throughout the album including Dweezil Zappa on Diva Fever). Not to be taken sufficiently seriously, this track is a lot of fun … can you tell who is playing and when?

Are you a guitar player looking to take your career to the next level?

Then why not join us here at ICMP London school of music. Look through our guitar degree courses and book yourself a place at our next open day