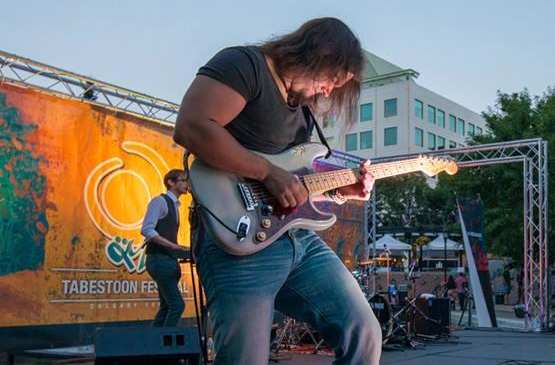 ICMP has recently appointed guitarist and composer Dr. Rich Perks to its guitar teaching faculty. Rich is graduate of the legendary Guitar Institute, and has developed an impressive career in both performance and academia since graduating ten years ago.

Rich is a progressive and innovative musician who is always in great demand, performing and working as a session player across a wide range of contemporary, experimental and improvised music and specializing in fretless electric guitar. In addition to studying at the Guitar Institute, Rich studied privately with Dave Marchant and has played at festivals all over the world in recent years, including at the North Sea Jazz Festival and the Montreux Jazz Festival.

He held the position of Head of Guitar at the International Centre for Music in Qatar for a year, during which time he has performed intensely with Doha Jazz, a renowned middle eastern jazz quartet, and holds a Masters Degree from Brunel University, where he specialized in improvisation and composition. His debut album Imposition was recorded and released to great reviews in 2009; in October 2011, his piece Box of Serial for solo flute was premiered by the internationally acclaimed flutist Nancy Ruffer; he completed his PhD research at Brunel University in 2013; he recorded guitars on Iranian pop/rock artist Ali Azimi's albums Mr. Mean and Till Glory Finds Us and performed live on both the 2014 and 2016 accompanying World tours; and he continues to be in great demand as a session guitarist and live performer.

Tony Harris, Dean of Academic Studies at ICMP, said: ‘We are delighted to have such a professional and exciting talent as Rich join ICMP’s guitar teaching faculty. ICMP, and the Guitar Institute, have built up a reputation over more than 30 years for working with the best industry practitioners and academics in the business, and this appointment further adds to an already-impressive roster. Not only this, Rich is a great example of how ICMP graduates build successful careers in the music industry and we are delighted he is now returning to share his knowledge and experience with current and future ICMP students.’

Check the guitar courses at ICMP