We quiz our BMus student on her latest live project, performing a classic Patrice Rushen track... 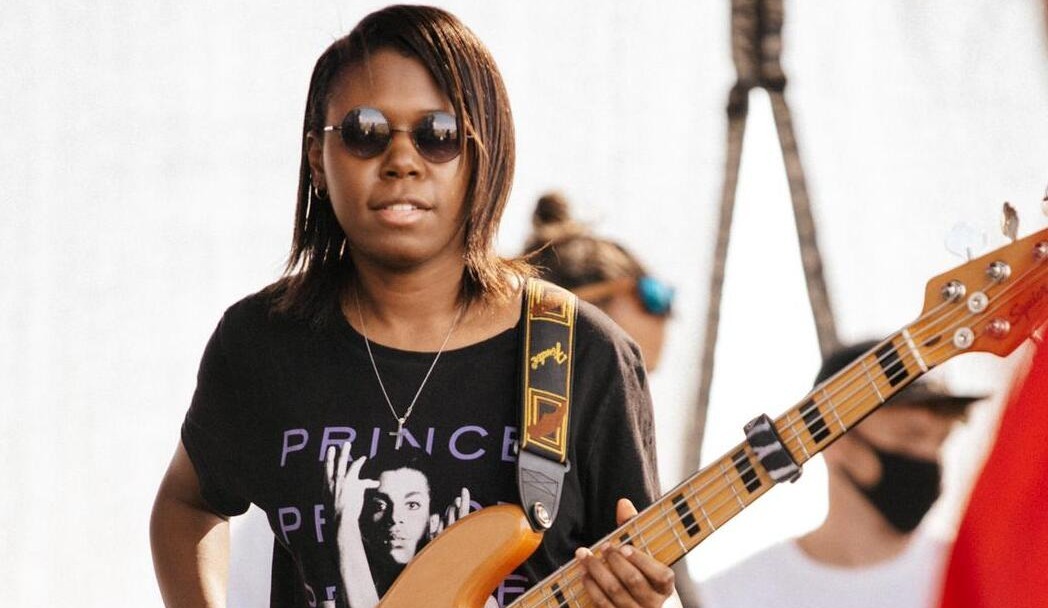 As a bass player on our BMus in Popular Music Performance programme, Taylor Harvey is an exciting new musical talent to keep your eyes and ears on.

She's spread her musical skills across numerous endeavours including featuring on a brilliant performance of the Patrice Rushen classic, 'L'esprit de Joie' , performed by the Diasporan Queens and put together by rising star, Roella Oloro.

We caught up with Taylor to learn how the online collaboration came about and how it felt to have her performance played to Patrice Rushen...

Who or what inspired you?

My family for sure. I grew up pretty much living and breathing music. A lot of my musical influences come from my parents and the music they would play when I was younger, plus they have a really cool vinyl and CD collection. I’d always be introduced to new artists and musicians that would later on inspire me to create similar music as well as find my own sound.

As I grew older I tried out different instruments. I played violin for four years and piano, and my family always inspired me to keep going on this musical journey. For instance, my dad is a producer and sound engineer, plays keys and synth and has been doing music since he was a teenager. My mum used to play violin, and I have a cousin who is a host for a show on NTS radio. My family are all such big inspirations and motivate me to keep making music and basically do what I love.

How has your musical journey been so far?

Even though I’m still at the beginning of this musical journey, personally I feel like I’ve already come along way.

I’ve had to deal with people who would tell me I’m not good enough and that I should quit but I’m glad I didn’t, and a lot has already happened, for instance, playing for multiple bands, auditioning and getting a place at prestigious music schools such as the Boston Conservatory at Berklee and The Institute of Contemporary Music Performance (which has been my dream school since I was 16)."

Getting to be a part of the amazing arrangement Roella created which led to Patrice Rushen seeing it, working on global collaborations, just all of these amazing opportunities have happened already and I am so grateful for them.

How did you hear about ICMP?

I first heard about ICMP from a tutor at my high school. At the time there was Access To Music, a music college, next to the uni, so my parents and I went to Access’ open day but also wanted to check out ICMP and the whole time I was there I could not stop smiling. 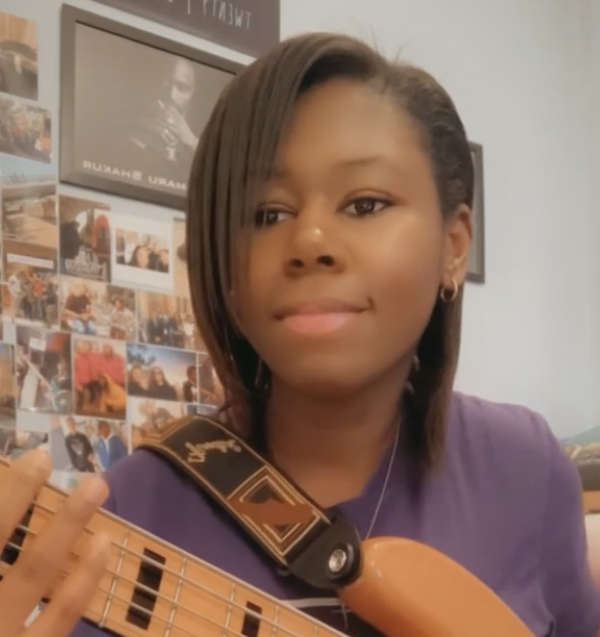 I still remember the bands that played on the open days I went to, as well as getting the chance to play myself.

I’m now currently studying BMus Music Performance at ICMP and even though it’s only November, I’m already loving it, the course, the classes, the friends I’ve made, overall its fantastic. I feel like I’ve already learnt so much, improving as a performer, individually as well as performing with bands. The bass lessons are brilliant, the theory classes are so great. I’ve had the chance to work with a few students from different courses or a year or two above and they’re really kind and really cool to work with.

Could you explain a little about how the opportunity came about? How did you meet Roella?

I originally met Roella over Instagram, back in September, after a good friend of mine recommended me to her. Roella told me she was a student at Berklee and that she was working on a project, she made an amazing arrangement of Patrice Rushen’s song 'L’espirit De Joie' and was working with some women also from Berklee called the Diasporan Queens.

She told me she needed some bass rerecorded to go with it and asked if I would be down with laying some bass on the track and record a video of myself performing. I thought this was such an amazing opportunity to work with some incredibly talented musicians so I said yes straight away! So, she emailed me the audios along with the music sheets for reference.

How did you find working on the track?

I found working on the track interesting as well as a challenge; I’m a big fan of jazz and the sub-genres within it and it’s one of the genres I try to improve on, mainly playing-wise. Overall, it was really fun to work on, I did a few different bass audio takes to send, and then about a day or two later, I did a few video takes for it and chose the best one to send along with my bass audio. I was glad Roella liked it when I emailed them, she gave me great feedback and told me she was super proud of what I did and to definitely keep going and that I’ll be a very sought-after musician. That was really kind and motivating to be told that, especially from someone as talented and dedicated as her.

Where was the video shown? And how did it feel to see/hear the finished track?

Fast forward to November, I received a message from Roella, which said that she finished the video for the global collaboration, and it was sent to Terri Lyne Carrington (NEA Jazz Master) and she really loved what we did. She also said that Patrice Rushen would be visiting the Jazz and Gender Justice Institute and that the video was going to be shown to her there.

Roella asked Terri if everyone that was in the video could attend the gathering and she said yes.  The virtual gathering/masterclass with Patrice was absolutely amazing. It was kind of like a little concert for her, many students from Berklee showed her videos they created, and they were brilliant, and then our video came up.

I couldn’t believe Patrice Rushen was watching. I was buzzing, it was such a great evening especially as my parents and older brother were watching as well. Patrice applauded our video once it was done and Roella said the names of the musicians in the video and when she said my name I then kind of introduced myself to Patrice."

After that there was a masterclass and people were allowed to ask her questions, it was cool hearing her talk about her experience in the music industry, as a black female musician in the music industry and she gave really great advice. It was an honour getting to meet her and I felt so grateful to be a part of the video. I would like to also say a big thank you to Roella for giving me the opportunity to be a part of this, she’s an inspiration.

“Don’t just be flashy because you’re trying to impress the next musician. The next musician needs to understand what they’re doing and remember you're serving something bigger than yourself - that’s the music.”

This was from Ralph Rolle, drummer for Chic, he said this at a masterclass I went to. This was a brilliant experience, getting to meet him and see him play and listen to his really great advice he gave to everyone.

What projects have been keeping you busy alongside working with Roella?

I’m currently the bassist for two singers, one being Alysha Ramos, the most recent gig I played for her was at Wildpath’s Festival on the main stage in Norwich, which was such an amazing experience plus we were playing on the same stage as Kokoroko and Joe-Armon Jones, which I loved as they’re part of my musical influences. I also currently play or Sophie Griffiths, I recently joined her backing band, and we will actually be playing at The Lighthouse in Poole, Dorset on the 10th December which I’m really looking forward to.

I’ve also been working on a little collaboration series with musicians from different countries on instagram, called 'Collaborations in Isolation' which are either online jams or covers.

It’s been really fun, getting to connect with musician friends over the internet, one of the videos from the series actually got featured in Adam Neely’s viewer critique video which I’m still kind of buzzing about as he’s a big inspiration of mine.  I still have a few collaborations covers on the way, one which I’m planning to be with a few current students from ICMP, and have been working on some original music which I plan on publishing and creating short videos for soon...

by Jim Ottewill
November 30, 2020
ICMP Life
Back to Blog Home