ICMP alumnus Matt Gleeson talks about how his business got him to work for bands like Radiohead and Kasabian... 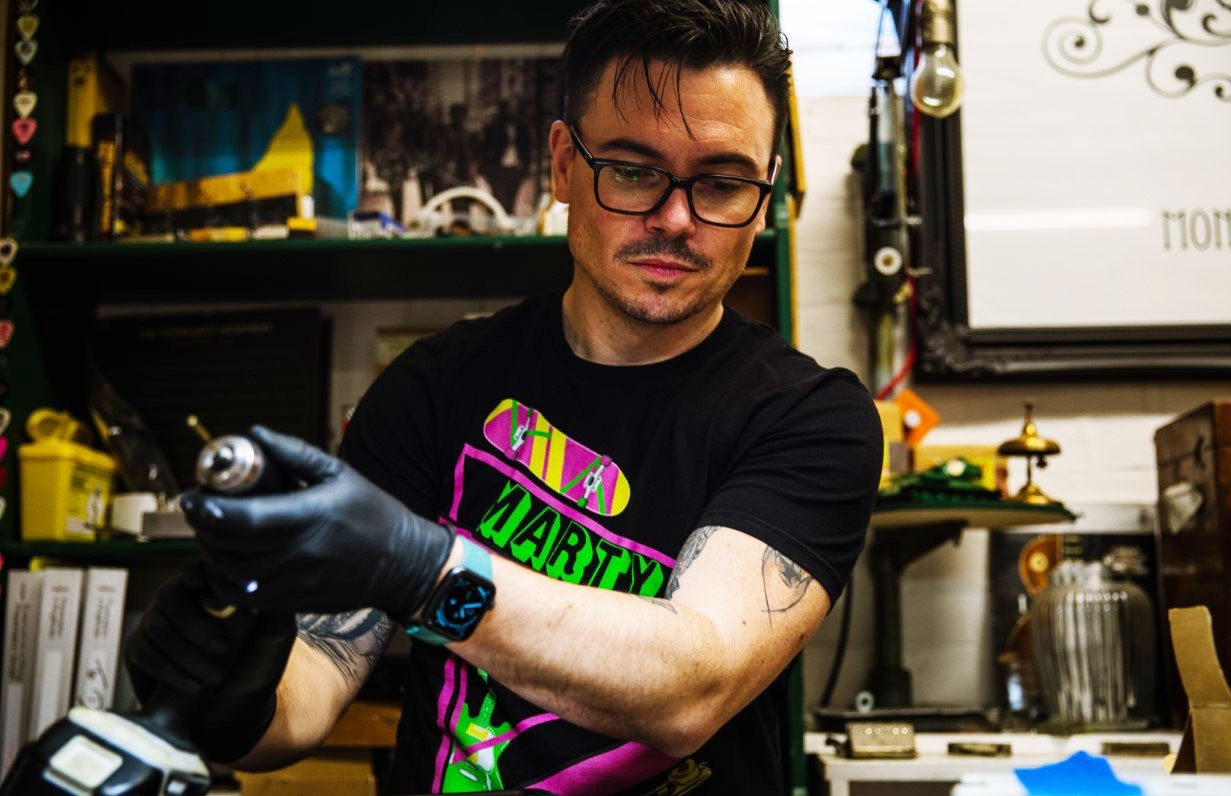 Matt's 20-year luthiering experience, together with his passion for fixing things and good music, pushed him to start his own business. Started as a repair shop, Monty's Guitars now also offers various services and a great range of vintage-style pickups.

Matt was a great student; always interested and keen to learn. I'm really pleased he has created such a great business and a great brand, and he can now share his passion for guitars with the next generation! I'll be dropping my Les Paul in for a pickup rewind shortly...

Matt talked to us about his career and how his successful business led him to work with some of his music idols.

What made you realise you wanted music to be part of your life and career?
It all goes back to Christmas 1986 when I sat down and watched Back To The Future with my Gran and saw Marty McFly playing 'Johnny Be Good' on a red Gibson 345. It is the reason why I wanted a guitar, as well as a pickup truck and a skateboard! That film has got a lot to answer for…! Later on, it was hearing bands like Nirvana, Green Day and Radiohead and just falling in love with the noise they were making. I wanted to do that too.

How did you become a luthier?
I’ve always worked with my hands. Even as a child, much to my parent’s dismay, I dismantled everything I could get my hands on. I was, and still am, hell bent on finding out how things work, and I always did it with the full intention of putting everything back together… When I was nineteen, I really wanted to go to the ICMP, or The Guitar Institute as it was known back then. The problem was I had been kicked out of home and had no money or even a guitar!

I approached charities to see if I could get funding and managed to get help through the Musicians Benevolent Fund. They helped me find money for my fees and living arrangements, and also bought me a guitar! It was a three-tone sunburst Mexican Telecaster.

The guitar was great, but like the best of us, still had issues. I had to regularly take it to get fixed at Chandler Guitars in Kew and being a poor student, it was an expense I could hardly afford. It always ended up getting patched rather than properly fixed. I started asking if I could get a job to cover the cost of the full repair, whether it was making tea or anything else they might have needed. It was on the day I graduated from the Guitar Institute that I was told that there was an apprenticeship going at Chandler Guitars with Charlie Chandler. The rest is history! 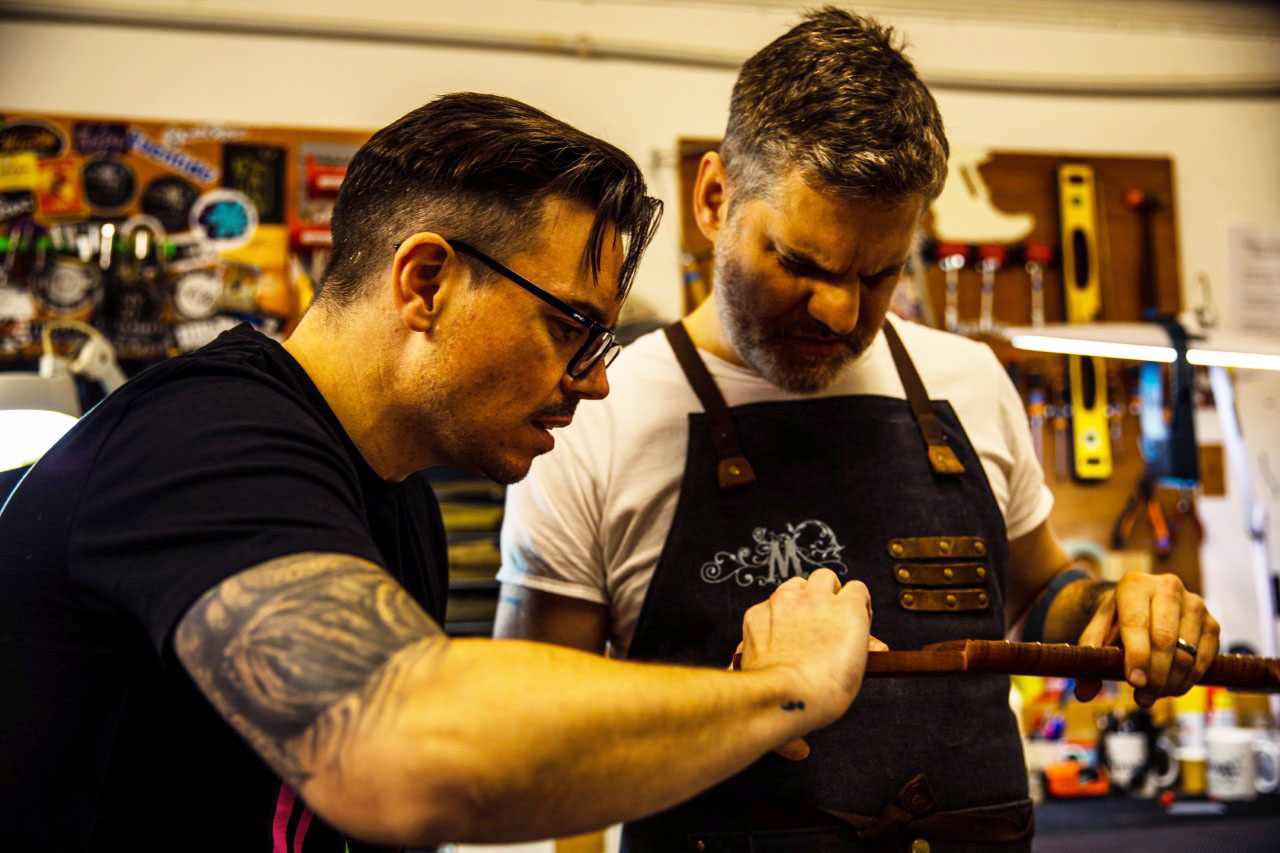 How did you come up with the Monty's business?
I’ve always wanted to have my own business and be my own boss. The seeds of Monty’s started in about 2005. My friends used to always ask me to fix their guitars and I still happened to need some extra money, so I set up a makeshift workshop in my spare room to start fixing things on the side. By 2010 a few things changed at Chandler Guitars, and a little later that year my wife and I had our first child, ao the time felt perfect to strike out on my own.

It started initially just as an instrument workshop; I had a very solid customer base from my days at Chandlers which kept me very busy, but I was really at the limit of what I could earn just doing repairs because of the nature of the business; you can only sell your time once. The idea of making Monty’s a brand and selling products had always been on the back of my mind, so I decided that was the way to go. All the years I spent working on guitars made me realise how pickups have a major effect on the instruments tone and can really shape the sound, so that is what I focused on. I didn’t have a research and development budget, so I sold my motorbike, bought Jason Lollar’s pickup-making bible, a load of parts and locked myself away in the shed to figure it all out. 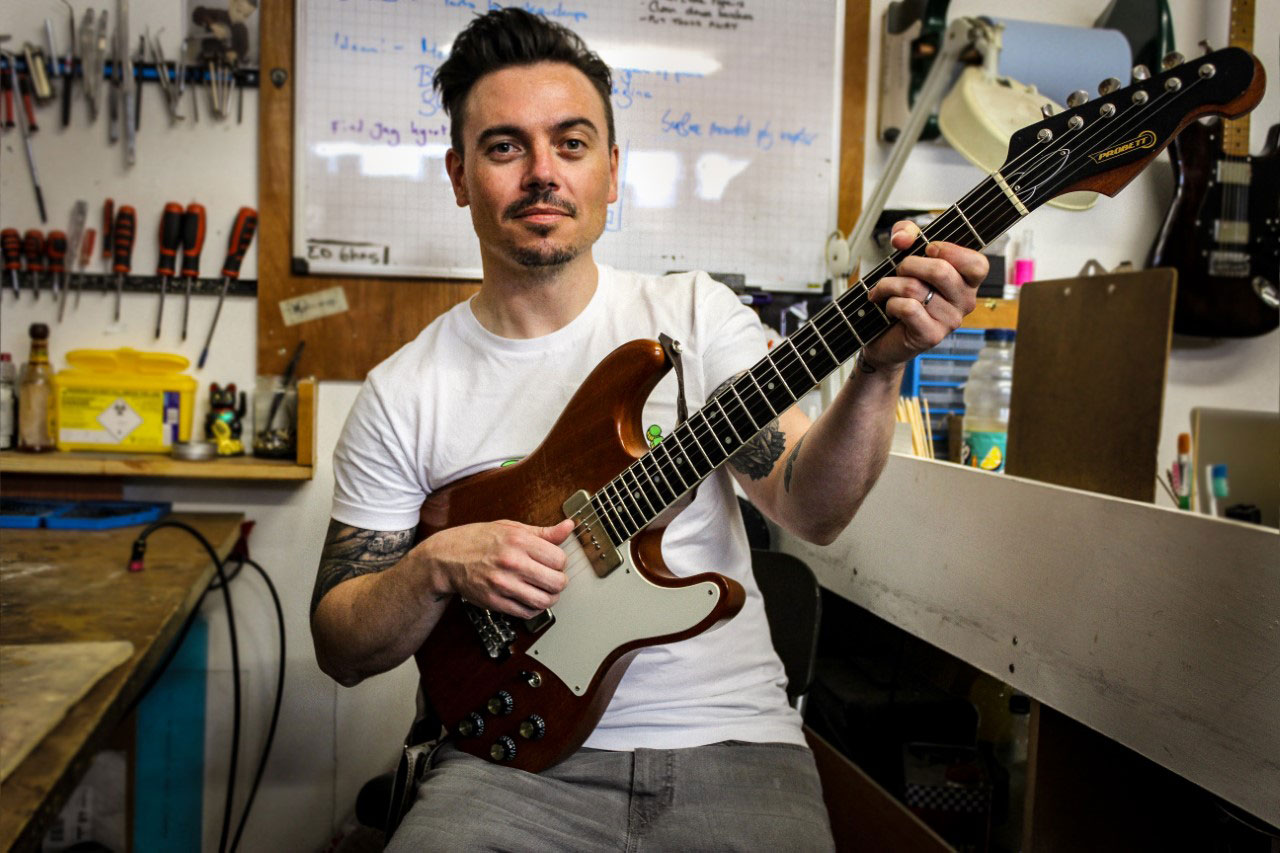 What's a day at Monty's typically like?
Every day is different at Monty’s, we are a small team and although we all have specific job roles, we all end up taking on multiple tasks whenever necessary. Some days we can all be winding pickups and packaging them, while others we could be filming and editing things for our YouTube channel. It can be fun and it can be stressful, though very fluid. Things have to be that way within a small business.

What have been the most pivotal milestones in your career to date?
The first real milestone was getting an order for pickups from someone who I didn’t know or have any link to; that was huge.

Now I feel the biggest achievement so far has been building the Monty’s team. The company has grown from just me in a shed to now being in a commercial premises with several employees. I just couldn’t achieve any of the great things we are doing without them around me.

But something that will always stand out is the afternoon I got a text from someone claiming to be Ed O’Brien from Radiohead saying he had heard my pickups, loved them and wanted to get a set. I was convinced it was a prank, turns out it wasn’t…

Together with Ed, you also got to work with David Gilmour, Kasabian, Mark Knopfler and more. How did you get to provide your services to such great artists?
To start with, I think it was partly due to being in the right place at the right time. With David Gilmour, I was working at Chandler Guitars, which at the time was one of the top guitar shops in the UK, they had rock stars as regular customers, and I would occasionally get to work on their guitars. This allowed me to build relationships.

With Kasabian it was a similar thing; in the early days, Monty’s had a workshop at a recording studio called ‘State of the Ark’, in Richmond. It was owned by Terry Britten, the writer/producer who wrote ‘What’s Love Got To Do With It’, and a million other hits. Kasabian were recording there and suddenly had an issue with a guitar... I was asked to fix it and it went from there! 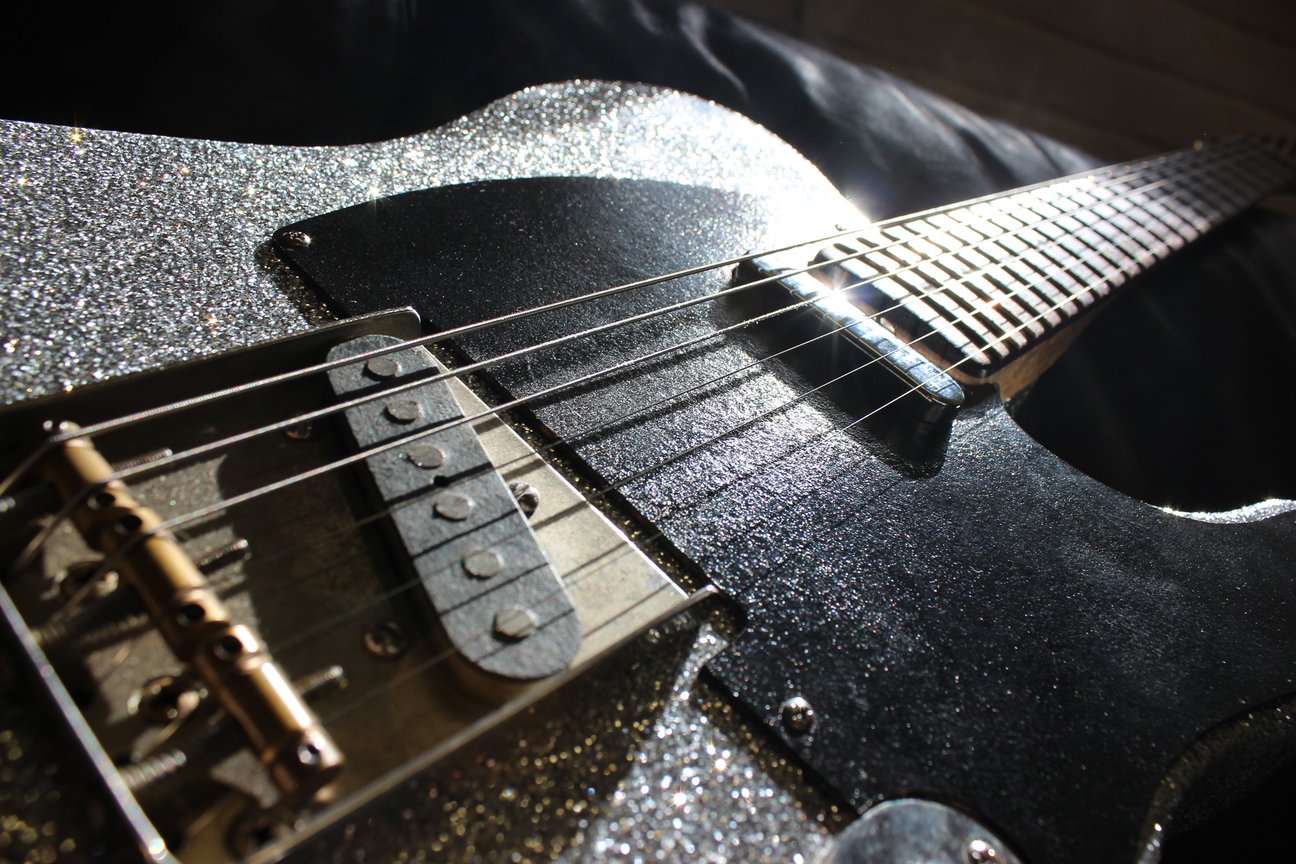 I’ve been lucky in the fact that since the beginning of Monty’s I have had a great client base. Being a guitar repairer is almost like being a hairdresser, once someone finds one they like, they stick with them. Over the last twenty years I have built a positive reputation in the industry. I always say ‘do good things with good people and good things will happen’, and I believe this is the true reason why I ended up working with a lot of big artists. You never know who knows who, so be nice, do a good job and good things will happen.

What would you say are the best tools to promote your business and ensure it is still relevant in the market?
Social media is great for this, although these days people are smart and get turned off by endless posts about what they should be buying.  We try to tell our story not just to push our products; we want people to see who we are, what we do and follow our little workshop adventures.

In this day and age, the best promotional tool you have is you. If you have passion for what you do and believe in it, that passion will shine through and it will be infectious.
It is also important to remember not to see failure as a negative, you either succeed or you learn.

We are also lucky in some respects that we exist in a niche of a niche; there is a very clear trend in the market for vintage accuracy, and it is becoming more and more important. Our friend Johnny Marsh always says ‘people want things to be exactly like the 50s... Just minus the polio!’. We are very good at recreating those sounds, so once the word got out people have gravitated towards us.

Which artist would you love to work with?
There are loads, but Mike Einziger from Incubus would be pretty cool.

Who is your biggest musical inspiration?
It has changed through my life, at first it was Marty Mcfly, followed swiftly by Bart Simpson’s ‘Do the Bart Man’. Then it was Nirvana, Green Day and Radiohead for a long time. I really like Incubus, Brad Paisley and The Staves but my current obsession is The Midnight. 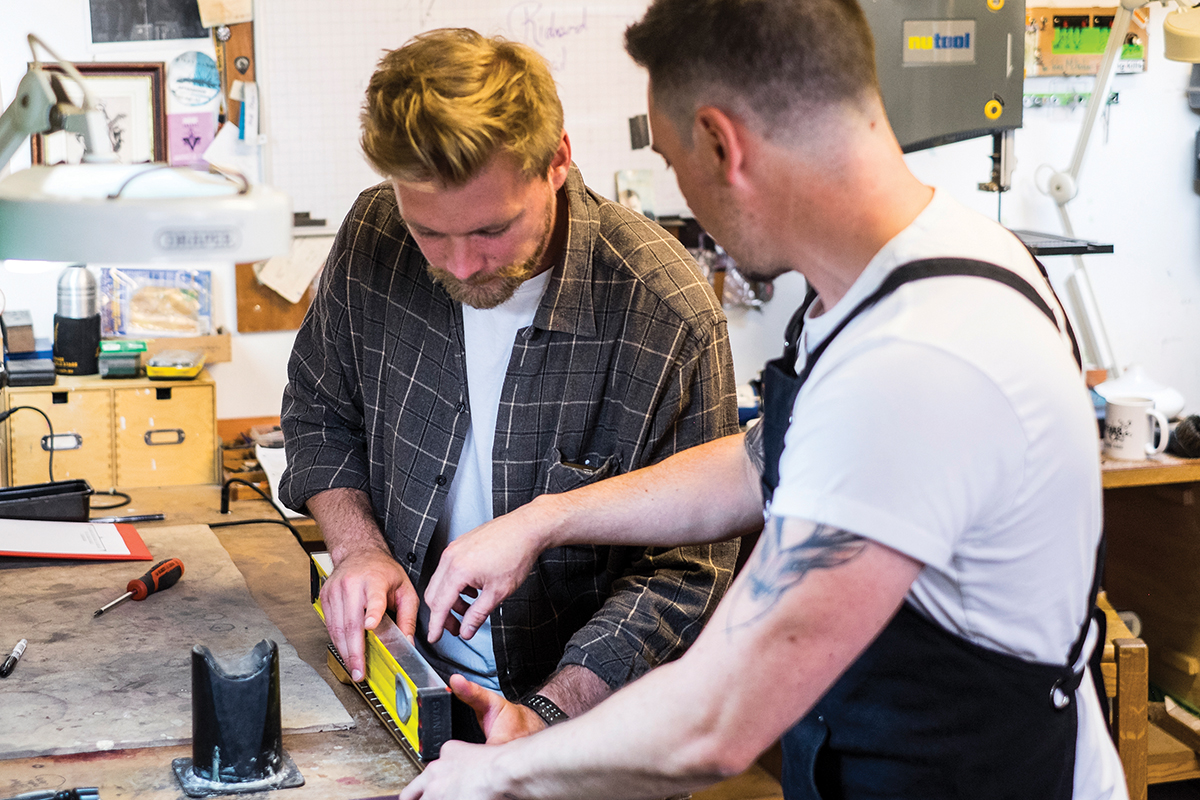 Do you have a band of your own? Are you involved with music in other ways apart from your job?
After leaving The Guitar Institute I was in various original projects, but up until a year ago my main musical outlet was playing guitar in a function band called Fake Tan. It was an 80s tribute band that played a lot of ‘guilty pleasures’. I had a great time with them and flew all over the world to play gigs including a massive one at the Albert Hall, here in London! It was a tough decision to leave that project but Monty’s was getting busier and busier.

That said, I still have side projects: I have a podcast with Steve Crow from Audio Kitchen called ‘What Goes On’ where we talk to people who work in the music industry at different levels. We talk about what really goes on, not just the glossy stuff that is visible on the surface.

I also have a company called We’ve Got You which is a clothing brand with a focus on bringing awareness to mental health. It is a huge problem that affects so many of us and I wanted to shine a light on it.

How did studying at ICMP help you in your career/personal development?
My studies gave me a huge amount of focus and pushed me past what I thought I was capable of. That mindset helped me massively when it came to start a company, and has led me to achieve things I never thought I could do.

What else do you have planned for Monty's in the future?
I made a promise to myself 18 months ago to run with every business idea I get - however crazy - as I do not want to be the old man in the nursing home with regrets, so watch this space.

Study Guitar in London with ICMP

Call our friendly Admissions Team on 020 7328 0222 or via email enquiries@icmp.ac.uk and start your music career today.

by Lara Magnelli
November 10, 2019
Creators
Back to Blog Home