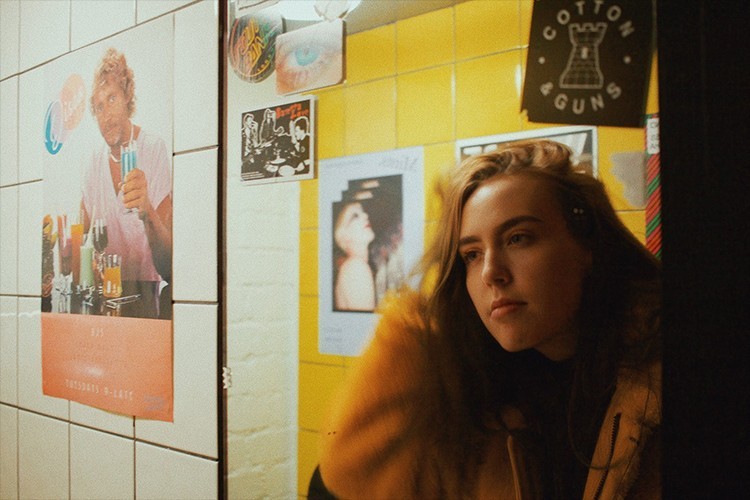 Over a handful of releases including the ace 'Crush' and latest Billboard approved number 'Not Cute', Foxgluvv has been ear-marked by tuned in bloggers as one to watch and we're excited to see where she takes her creations next.

We invited Imogen and sonic accomplice Scott Colcombe to record a live version of 'Not Cute'  for us in our Audient studio. At the same time, we also grabbed them for an interview which you can watch now. Read the Q&A below...

How important has your time at ICMP been in your evolution as writers and musicians?

Imogen Davies (ID): It’s been so important because I literally came to ICMP and I didn’t know what I was doing, what kind of music I wanted to be making, what music I even really liked.

Studying for the three years on the BA course just made me realise that I needed to focus in on what I like making instead of what I should be making."

Scott Colcombe (SC): Yes, the songwriting course worked really well for me as well, because I started to get into production and ideas about it. That’s where I am now, I feel like I'm more a producer than anything else, so that really helped me find out what I wanted to do.

What does the future have in store for you guys individually and for this project too?

ID: I’m thinking about doing an album but it’s not completely thought through yet. That should be the next plan, to get a body of work together and release that.

SC: Yes, and after that fame, money ... no, just making music is just really fun. The more music we make the more fun it is.

What’s the best piece of advice you’ve received about making it in the music industry?

ID: Miranda Cooper told me that when I find that partnership that works well to stick with it and keep doing that. Yes, that’s what I’ve took on.

SD: Yes, I think there’s also that Snoop Dog quote which is something like, “If you’re not in there with people you like, then there’s no point in being up there in the first place”. Working with people who you like is really fun and probably more beneficial.

What would you advise up and coming songwriters?

SC: Yes, and also, you’ll always feel like it’s never finished. You’ll get to the point where you’ve been doing the same drum sound for about year and I think at one point I don’t think anyone else cares. I think there’s always a point where you just need to be ready to finish.

How hard is the process of getting your music onto Spotify and Apple Music as a new artist?

ID: Actually getting the music out there is not the difficult part, it’s getting people to listen to it that’s tricky. You can just upload anything through a distributor and get it on Apple Music and Spotify easily.

SC: Yes, I think the best platform to focus on is probably Spotify.  Not only are they the biggest one but they’re good at helping artists. They have the app to help you out. I think that’s probably the best.

How important is music education to inspiring and helping this next generation of music talent to come through?

ID: I think it’s really important. I don’t think I’d be doing what I’m doing now if I’d never gone to college and studied music. I don’t think I’d have as much drive to be out there and do it. It would just be a bit of a pipe dream.

SC: Yes, and also the whole London thing. With the university you come to London and you get your student loan which means you can stay here for three years and then you see what happens.  The location is just so great.

Read our blog article on the top five reasons why London is the best place in the world to study music.

by Jim Ottewill
June 6, 2018
Creators
Back to Blog Home