The Raven Age drummer tells us how to survive touring the world with metal heroes Iron Maiden and more... 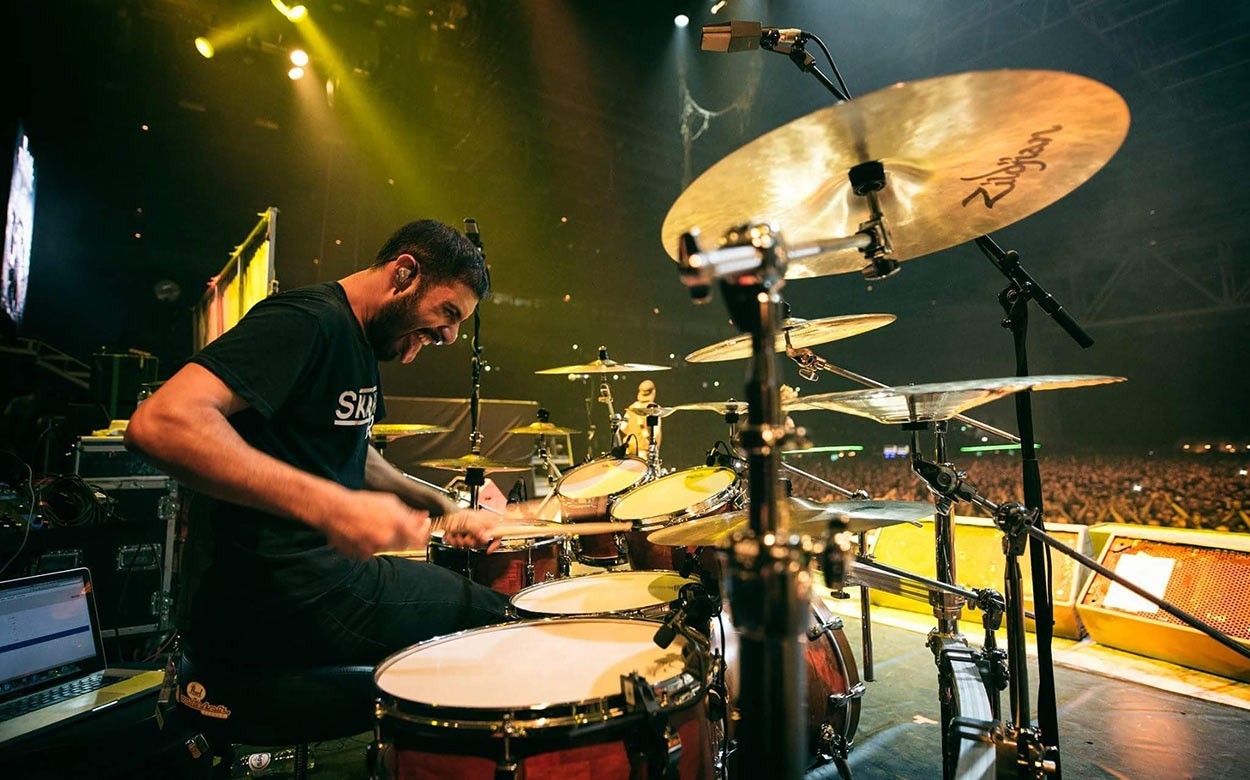 For any aspiring rock musician, our drums alumnus Jai Patel is living the dream.

As sticksman for Brit metallers The Raven Age, he's in one of guitar music's most hotly tipped new acts thanks in part to their brilliant new record, 'Conspiracy'. The latest release sees the band upping the ante of their contemporary rock sound, one honed by plenty of time touring some of the world's biggest stages as support to metal legends Iron Maiden.

As the band gear up for another summer of high profile international shows, we caught up with Jai to find out how his studies with us shaped him, his playing and prepared him for life on the road with some of the best in the business...

How did your love for music begin?

I was brought up listening to a lot of classic rock as my dad had a load of cassettes of bands like Led Zeppelin and Black Sabbath. Every time we had a car journey, my brother and I always wanted to listen to them at full blast! Also, my family are very tennis orientated so I used to dance around the room with a racket pretending to play 'Smoke On The Water' on guitar. Quite embarrassing really … but let’s be honest, who didn’t do that?! 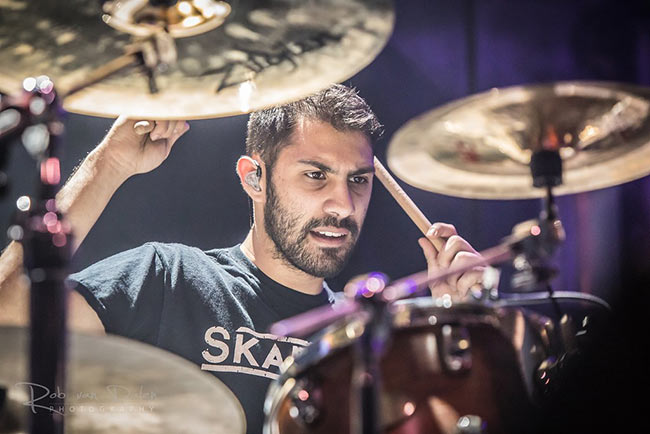 What led you to the drums?

After mastering the tennis racket I started playing the actual guitar and began jamming with two friends who both played drums. Drumming looked a lot of fun so every Friday my mate would show me some basic grooves. I picked it up pretty quickly and really enjoyed it so decided to get my own lessons as part of the ‘skill’ section of The Duke Of Edinburgh Awards. I haven’t stopped playing since!

Why did you decide to study at ICMP? And how did you find your experiences?

I wasn’t interested in getting a job and I just wanted to drum, drum, drum. I was aware of ICMP as I’d just completed a higher diploma at Drum Tech where I enjoyed learning a wide variety of all things drumming/music related. My parents wanted me to get a degree or a job and I couldn’t pass up the chance of being able to work on music and my drumming for three more years. I’ve said it numerous times to various people, but I’m so glad I made that decision!

I learned a hell of a lot from all the amazing tutors and made some life long friends during my time here. Studying at ICMP shaped the way I interact with musicians, approach gigs/jams/sessions and also how to carry myself within these musical scenarios. Without it, I don’t think I would have achieved half of what I have already and hopefully there is more to come.

My first drumming hero and my all time favourite drummer is The Rev from Avenged Sevenfold. Sadly, he passed away in 2009 but his style, ability and songwriting was so unique and creative. More recently, I'm very much into Matt Greiner’s (August Burns Red) and Anika Nilles’ drumming. Both are phenomenal and outrageous players.

How did you end up joining The Raven Age?

Dan, our old guitarist and now manager, found a drum cover I put on YouTube of myself playing 'Dark Days' by Parkway Drive. I recorded and uploaded it a day or two after the song came out so it achieved a bit of traction and appeared near the top of searches for a while. Soon after, the other guitarist George asked me to join the band as a drummer: this was the last piece of the puzzle of The Raven Age.

Long story short, I went down to record a track in August 2013, we all got on super well and I ended up joining officially a few days after. 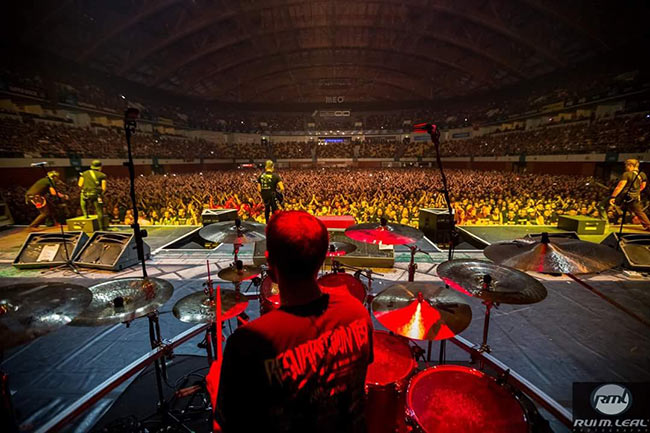 The band has enjoyed some great success. What have been your highlights of playing with the group?

Honestly, many of the experiences and things we’ve achieved so far I’ve never even dreamed of!

The big highlight was obviously touring the world for about six months with Iron Maiden on their 2016 Book of Souls World Tour. We travelled on Ed Force One, their huge plane that carried the band, crew and gear, and got to visit so many incredible countries in six different continents … it blows my mind!

I’d always imagine how amazing it would be playing venues like the Underworld in Camden and Brixton Academy but never any bigger so, playing in places like Madison Square Gardens, the national football stadium in Chile among arenas worldwide was ridiculous.

We also recently toured around the UK and Europe in support of our second album ‘Conspiracy’ and it was a nice touch to have Defences supporting. One of my best mates Kyle Parke, who I studied with for three years at ICMP, is the drummer.

Have you any tips for surviving life on the road as a professional musician?

Make sure you stay as fit and healthy as possible on tour. It’s so easy to eat loads of fast food, drink loads of alcohol and have three hours sleep a night but your performances will suffer and you’ll become fatigued. There’s no problem in eating some junk food, going out, getting drunk and have a big night out but just be mindful of your limits and how soon the next show is! You want to give 110 percent every night for all the people who’ve spent their hard earned money on tickets to watch you play. P.s. Quick bonus tip: It’s a small industry and everyone knows everyone … so be nice! 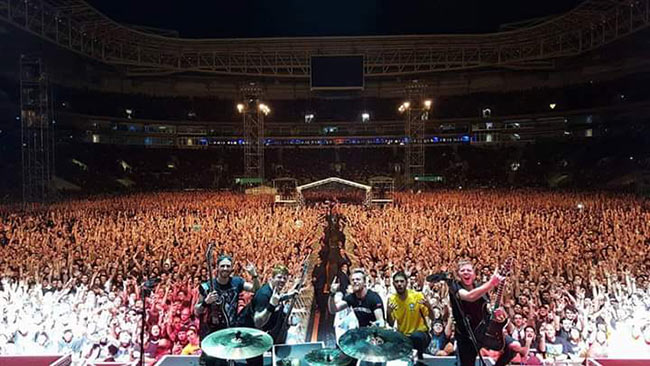 For any of our students at the start of their music careers, what would you advise them?

Do your best to say yes to any gig/session opportunities that may arise! You never know what it could lead to. Also, don’t be overwhelmed by the amount of great drummers that are out there; Just work hard, practise as much as possible and you’ll be right up there with them."

The only thing I wish I knew before starting out is that having a big kit + playing lots of gigs = many hours setting up and packing down!

Have you any tips on how new musicians can sustain themselves from their music?

Keep making music and perform everywhere and anywhere you can. The more times you play, the more people will see you and recognise you or your band. It’s not really record sales anymore, it’s about performing live so you want to make your show as good as it can be , then just keep getting out there and over time you and your fanbase will grow. Just make sure you grab hold of every opportunity you get and sell as much merch as possible!

What is your favourite piece of kit/music gear?

I’ve just got a brand new drum kit made by the British Drum Company so at the moment it has to be that! It’s an absolutely stunning Legend series kit in a Kensington Knight finish. If I were to choose one specific item though, it’d have to be my 18” A Custom Projection Crash or my Pearl Demon Drive Double Pedals. That crash literally sounds like my imagination of the perfect crash cymbal and the Pearl Demon Drive pedals are so smooth and probably the only thing that I wouldn’t do a gig without. 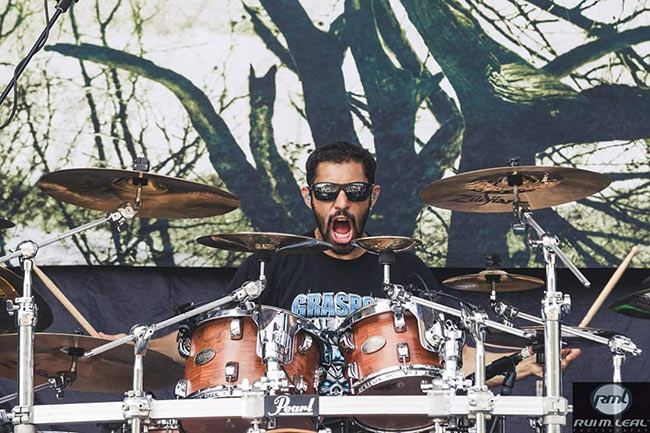 What future projects do you have in store?

Currently we’re preparing to head over to the North and South America in July 2019 for three months as part of the 2019 Iron Maiden Legacy of the Beast Tour which is going to be huge! We’ve had many messages asking us to come back to the US and Brazil so we’re really looking forward to it. The crowds in South America are the best! We’re also trying to secure something at the end of the year but that’s top secret at the moment. As usual we’re always writing and working on new music too but our second album ‘Conspiracy’ only came out just over two months ago so there’s no rush yet!

If you’re a drummer looking to take your playing and performing to the next level, then why not discover more about our drum courses here at ICMP London? Our drums faculty is going from strength to strength - find out more.