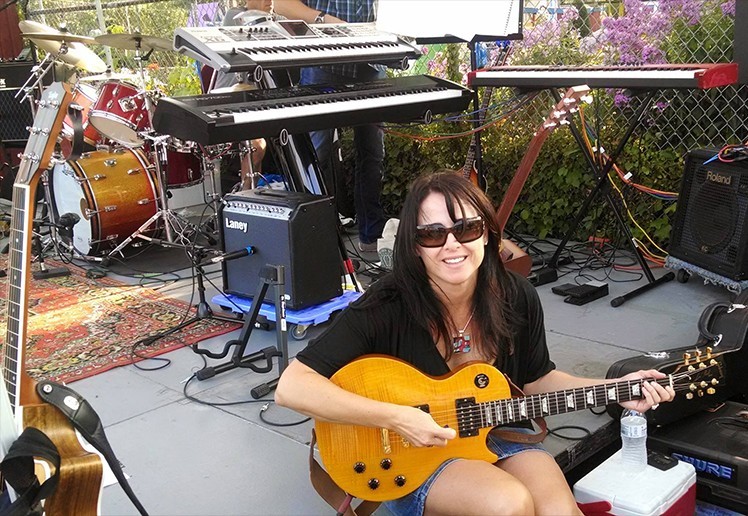 The fruits of her musical labours are now available to hear in the roots rock of her debut album, ‘Hwy 55’. Named after the stretch of road connecting Chicago and New Orleans, the album is born from more than a decade of performing and playing across US stages.

With the album released back in March, we caught up with Cat to learn more about the record and how her ICMP studies helped shape the release…

How were your experiences at the 2017 Summer School?

It was a fantastic week at ICMP. I was skeptical about applying at first because I am coming at this a bit older than what I thought the average student age would be.

But I was happy to see that the course had a wide range of ages.

I think the youngest person was 16 years old and the oldest (which wasn’t me!) was 49. That’s great on so many levels, especially because we have so much to learn from each other. It was good to get feedback and perspectives from different backgrounds and experience levels."

What did you cover on the course?

Some concepts I’d already been practising in my writing, but it was still reassuring to know they were widely used. Others I had heard of or read about, but never applied. Course leader Julian Marshall covered something he called ‘show not tell’ where he wanted us to use Pat Pattison’s tip of feeling something before we see it. It means shifting song lyrics to have the listener take that journey of feeling with the singer.

His example was instead of saying ‘walking on a beach’ say ‘walking with bare feet on cold wet sand’ and let the audience create the picture of where they are. Chances are it’ll be a beach, but you’ve given them texture and helped them visualize.

I definitely applied this to a song I wrote the week of the course last summer. It’s called 'Hold On' and I wrote it for my two sons, but really it can be a song for anyone wanting to lift up a friend or loved one.

The lyrics I wrote for verse three were:

"When your eyes feel tired and grey

And your spirit feels taken away.

When you feel you have nothing left to give,

Hold on, someone will wipe your tears."

I tried to talk about the reactions instead of the actions so the listener could feel too. So, 'feel tired and grey' instead of 'crying', and so on. Hopefully that helps the listener relate.

On that same song, I applied what ICMP teacher Jonathan Whiskerd suggested: to be economical with words. Have clear and strong ideas and try to change listeners with emotions.

I also have to give a shout-out to Gareth Spicer. He taught a great session on harmonic and drum pulses, showing us tips on how to make a song more interesting just by making slight variances on those pulses. He gave us demonstrations and one in particular was a great “a-ha” moment for me in songwriting. He inserted a rhythmic push into a section of a song and that instantly propelled it, gave it a new momentum and cued the listener that something was about to change. Listen to 'Momma Said'  or the horns on 'That’s How It Goes' and you’ll see what I mean.

Could you talk a little about 'Hwy 55' - how did you put it together?

I had several songs in my repertoire before the ICMP course but after learning what I did there, decided many of them would not make my LP. They certainly are valued but I feel they served their purpose - which is, got me where I am today. I just didn’t think they were as good as ones I’d written after. I grew up in New Orleans but currently live in Chicago, some 900 miles north. Both cities influenced this album and so I named the LP after the stretch of highway connecting them. The genre is southern roots rock and encompasses a little bit of soul, blues and funk.

After writing the music and lyrics for the tracks, I went into the studio with a group of musician friends in January. We laid all the tracks down first and then went back in for solos and overdubs. The horns for me were most challenging since I don’t play a brass instrument. I knew what I wanted though and instead of scoring the song for them, I just sang what I wanted them to play. Everything came together nicely, especially for a first LP.

What's the best piece of advice you've received about your music?

One of my favourite exercises during the ICMP course was when they paired us up to write together with another student.

Writing music or lyrics with someone was never something I was comfortable with. I was more worried about whether I was pulling my weight or not moving outside my comfort zone enough. But with a few prompts, I found it could be a great experience."

Another helpful exercise was getting feedback from students on songs. I incorporated some peer feedback for 'Hold On'  after someone suggested that I double-time the lyrics in the outro to convey more urgency. I did that and think of him every time I sing that part.

I’m trying to challenge myself musically and vocally to create music for another album. I’d love to find a songwriting partner and practise more of the ICMP techniques I learned last summer! And then, of course, you know, further down the road, a Grammy Award or two would be great...

Cat Rolfes and the Wild Ones will perform songs from their new LP  on June 22 at Evanston Rocks with friends the Victor Brown Band. Tickets for the show can be purchased online.

Visit facebook.com/catrolfesmusic for more information on Cat and her music.

If you're interested in developing your musicianship,  learning from our regular industry guests and collaborating within the vibrant ICMP creative community, then speak to our Admissions Team about our Music Summer Schools. Starting in July, we're running Music Performance, Songwriting and Music Production focussed week-long courses.