How to join a touring musical with bassist Doug Weekes

We recently interviewed ICMP graduate Doug Weekes to learn how he landed the role of bassist with the touring production of the ‘Son of a Preacher Man’ musical. 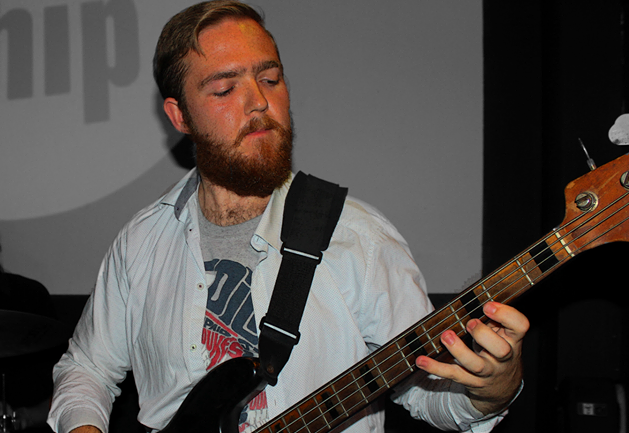 The world of musical theatre is one often left unexplored by musicians, but as ICMP graduate Doug Weekes has found, it can be a doorway to a full-time gig as a touring band member.

After a stint at ICMP as a student on the BMus (Hons) Popular Music Performance course, Doug used some of the contacts and experiences from his time here to land the role of bassist with the ‘Son of a Preacher Man’ musical.

With several months of touring with the production lined up, we caught up with Doug to find out more about his experiences and how he landed the role…

How did you first begin your musical journey?

My mum was an enthusiastic amateur musician so I was lucky to grow up hearing piano music being played around the house. I was eager to play myself and tried my hand at several instruments over the years before I received my first bass around my fifteenth birthday. I quickly became obsessed and luckily, I still feel the same way over 10 years later!

Who inspired you to take up the bass?

As with many bassists, I began playing the bass almost by accident! Two school friends had bought a drum kit and a guitar so naturally they need a bassist to form a band. The music I loved when I began playing bass was very rock/metal orientated so my early bass heroes were definitely Cliff Burton of Metallica and Steve Harris of Iron Maiden. However, when I discovered the magic of James Jamerson's Motown basslines a few years later, I began to take my playing and reading skills seriously. My audition piece for the ICMP was 'Darling Dear' by the Jackson 5!

Congratulations on winning the position of bassist with the touring musical ‘Son of a Preacher Man’ - could you explain a little about how you got the gig?

Thank you very much! Being booked for a tour of a musical can be a complicated process. Often there is a "fixer" who will book musicians for the show. In my case, the band was booked by a musical supervisor (the head of the music department) who booked a drummer I have worked with several times for the tour. The drummer was then asked if he knew any bassists he enjoyed playing with and he mentioned me.

What drew you to the world of musicals? Could you explain a little about your route in to this world?

My first introduction to musical theatre was playing in the band for my secondary school production of “Grease” (translated into Welsh!) I had so much fun doing that production that every time my school or sixth form college staged a show I made sure I was in the band. After I started studying at the ICMP I took the same approach and began playing for amateur dramatic society shows in my first year of my course.

As a musician, what are the challenges and opportunities created by working on a musical? What skills do you need to bring?

Working in musical theatre divides opinion amongst musicians. For example, the stability of being booked for a month of shows is a blessing to some and creatively restricting to those who love variety in their work. I'd say the most important skills a successful theatre musician should have are professionalism, consistency and concentration. A musician must always remember that they are only a cog in a much bigger machine when working on a show. Leave your ego at the door!

How did your experiences at ICMP help you get to where you are now?

Looking back at my time at the ICMP the thing that stands out was the example set by our tutors. As a teenager in North Wales I'd never met anyone that made a living as a musician, never mind one who worked at the level required to succeed in London. Hearing about the varied and interesting career paths my tutors had taken made me feel like I might have a chance to do well if I worked hard and followed their example.

I would say that they should be prepared to work hard but also to make the most of what a fantastic city London is for young musicians. Choosing to study music is a big decision but if you embrace all the opportunities that will come your way, you'll have a fantastic time.

For those looking to get a gig with a musical, what would you advise?

The first step would be to find musicians who are already working in shows. If you're studying, ask around to find out if anyone in the years above or below are involved in theatre and ask how they got started. If you meet a more experienced theatre musician you should ask politely if you can "sit in" on one of their shows. This is a great way to gain an insight into what will be required of you. The other aspect to consider is your music reading ability. Be honest with yourself. How strong is your sight reading? Seek out printed music for your instrument and make reading practice a part of your daily routine.

Musically, alongside ‘Son of a Preacher Man’, what current projects do you have lined up for the future?

I wish I had more time for other musical projects! On a tour you traditionally play seven or eight shows in a new theatre each week. Apart from a break around December, that's my schedule until next July! I've been working on starting a music history podcast recently so hopefully I can find a way to continue working on that while on the road.

Start your music career at ICMP

If you’re looking to take your playing and performing to the next level, benefit from exclusive industry opportunities and expand your networks, then join us on a course here at ICMP London.

If you fancy having a look around, and finding out more about ICMP, then join us at our next Open Day, book your place here.

by Jim Ottewill
October 4, 2017
Amplify your career
Back to Blog Home