How to get a gig as a touring musician for Jamiroquai

ICMP tutor Nathan Williams is an in-demand multi-instrumentalist who has spent much of the year on the road with pop titans Jamiroquai. Here he tells us how musicians can best prepare for landing these stadium opportunities... 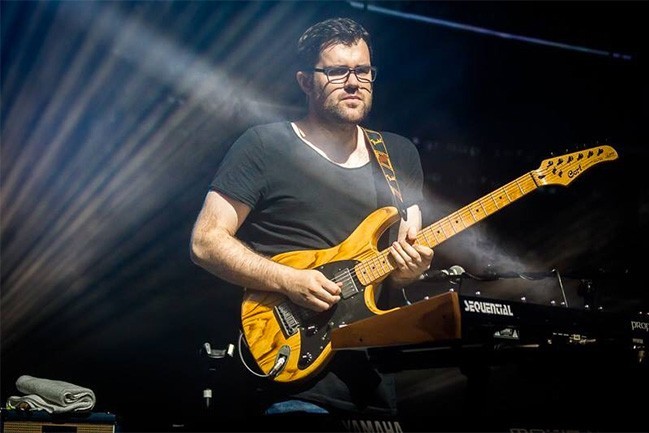 If your idea of a dream job is touring the world with one of the British pop music’s biggest acts, then you might well be envious of ICMP tutor and multi-instrumentalist Nathan Williams.

Nathan has spent much of the year on the road with Jay Kay’s pop titans Jamiroquai, playing the hits from their back catalogue as well as new moments from their latest album, ‘Automaton’.

It’s a great gig but how does a musician land such a job? And how do you deal with the pressures that come with it?

We caught up with Nathan to find out more on how emerging musicians can find these opportunities, win the audition and deal with the stresses such high profile roles involve… here are his tips on how to make these kind of gigs happen...

You’ll have to make sacrifices

Some people thought I was mad going from the beauty of Wales and moving to London where it’s expensive and I had to just eat rice every day to afford to do what I loved doing. But I didn’t have any options, I wasn’t any good at anything else.

Musicians have to want to get better

I practiced a lot and you have to if you want to succeed. But make sure you do it because you want to improve, not just because someone is telling you to.

Network with those who can push your career forward

When I came to London, the thing that really helped was going to jam nights. But the thing I always tell students is initially go to watch and don’t play. See who’s good. Go to different ones, figure out the scene, clock the faces and the players and do that before you start playing. Then always play with the best so you have to up your game.

Be ready to make the most of any opportunities

People talk about luck. But it’s not about luck, it’s about being prepared for opportunities and the harder you work the luckier you’ll get.

This gig came along because I got asked to do a function gig for a fortieth birthday party at Claridge’s. On guitar was Robert Harris who was the guitar player for Jamiroquai. I kept in touch, sent him my solo album 'Got To Let Go' and he called me up saying how much he loved it. He said we’re looking for someone to cover keys, guitar and backing vocals and asked me whether I could do it.

I went and did an audition at Jay Kay’s house and played along to these tunes and string parts. Jay walked in as I was playing. That was quite a weird moment - I got asked to do a solo over part of a song, Jay started dancing around and enjoying it and it was then that I realised it’d gone well.

Be overprepared ahead of auditions

If I didn’t have my shit together when I got the call? I can’t go to the audition and flop - being overprepared helps - so if they say learn the string parts, then I’ll do that but also the bass, the guitar, so I can really fit in.

Jay is a real rock and roll star - but I’ve done gigs with artists like this before. The weirdest moment was rehearsing 'Cosmic Girl'. He came in and started singing it was all pretty surreal. But you need to not focus on it and just play the parts. Focus on your job and don’t get swept up in it.

Don't try too hard to impress at audition

A lot of young musicians feel they’ve got something to prove. So they’ll chop all over it, play all the notes and rinse it. People who make decisions on who joins bands won’t be impressed as they’ve heard it all before. You need to listen and play with people rather than play over them.

Remember this is a job and you’re providing a service

It’s not about me or any of the other guys. You’ve just got to serve the artist or the music – that’s such a cliché, play for the song, but it’s true. Ultimately if you go and work in an office, you don’t go mess around all day, you’ve been hired to do a job, it’s not about fucking about, it’s about playing those songs. The older I get, the easier I find it but for young musicians it can be a struggle.

Don’t be afraid to talk about your problems

It can be a difficult industry so you need to talk about your mental health. It’s important to vocalise. It’s great that everything is more open and people are more willing to talk about these sort of issues.

Being sensible with food and exercise is wise. You spend a lot of time on a tour bus, lying down and not sleeping very well in the bunks. Like an air conditioned coffin. Normally, it’s a night on a bus, then in a hotel, so when it’s the hotel, I’ll try and make sure I catch up on sleep and go to the gym. Try and eat sensibly. You could have a fry up every morning but you need to watch yourself.

If you want to succeed, then don’t ever shun taking in any information. Take it all in, even when it gets difficult. Learn it. Knowledge is power.

Nathan has been on tour with the band for much of the year and will be back out on the road this autumn when they play UK arenas.

Jamiroquai released their eighth album 'Automaton' in 2017,  listen to the title track from the record below.

If you’re looking to take your playing and performing to the next level, then let us help you find the right music course for you.

by Nathan Williams
October 18, 2017
Amplify your career
Back to Blog Home