To celebrate 909 day, we look at the historic drum machine and its iconic musical lineage. 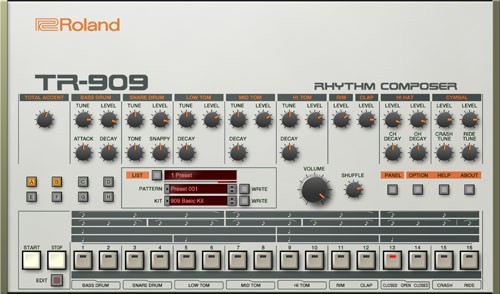 From humble beginnings in a “rented shed, with funds of $100,000 and seven staff culled from Ace Electronics,” Roland has forged a sonic legacy that is synonymous with musical excellence.

In its 50 years of existence, they have become one of the most ubiquitous and influential brands in music and forged an immeasurable cultural imprint.

From Madonna to Mr.Fingers, Roland’s history is steeped in success, and the brand continues to define music to this day. However, this was not always the case, with the initial reactions to many of their early products being wholly negative. Listeners, musicians and producers were simply unfamiliar with the new electronic palettes available and the imminent sonic revolution that was quietly unfolding.

Much like the equally iconic 808 and 303 machines, its underwhelming product launch meant that the 909 had ceased production after just a year on the market. Following these commercial shortcomings, prices “hit a new low around 1988, when you could often pick up a second‑user 909 for under £200 — and occasionally even under £100.” Roland’s hardware became very accessible to the bedroom producer, and numerous iconic musical movements grew from their affordability.

To celebrate 909 day - we have put together playlist of some of our favourite classic and contemporary tracks that feature a 909!