Here are ten things we learned about Dave, Blur and his life from his masterclass at ICMP... 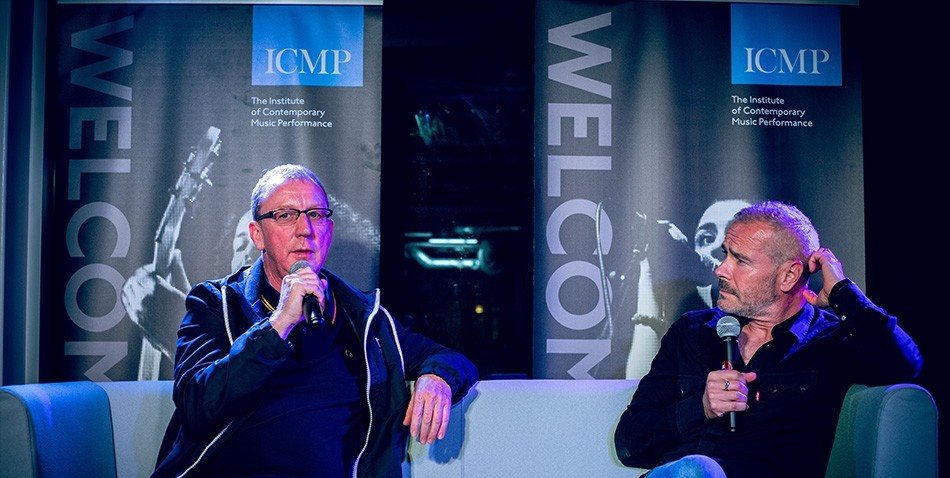 We were delighted to welcome Dave Rowntree from Blur for our masterclass.

Dave’s Q&A covered his whole career from his early years spent gigging around Europe to more recent times as a local Labour councillor.

Here are ten things we learned about Dave, Blur and his life from the session…

Dave comes from a musical family

Both my parents were classical musicians. It meant, in my family, you had to have piano lessons. I hated it and the proto-lawyer in me bent the rules so I managed to have lessons on AN instrument rather than just the piano.

His first instrument was the bagpipes

So I picked the bagpipes over the piano. But that didn’t work out so well. The bagpipes is a fighting, shagging kind of instrument and was a bit much for my younger self. So I picked what I thought was the second most annoying instrument: the drums. I quickly became utterly obsessed with them.

He joined Blur c/o of Graham

Graham Coxon was one of the people I’d been playing in bands with. He was an amazing local musician who had gone to school with Damon. Graham introduced me to Damon…

Damon stood out from all the other local musicians we’d be hanging around with. We all played music, but he actually wrote songs. And great songs at that. That was a bit of an eye-opener for me.

Being in a band is all about the chemistry

Being in a band is all about the chemistry. It wasn’t until Alex joined that we were suddenly better: immediately, the whole was straight away much bigger than the sum of the parts. From the minute he joined, things accelerated very quickly and we were signed to a major within a matter of months.

Blur were just like their name in the early days

We never knew what would happen when we went to play a gig. We knew we’d like to make a hell of a racket and what we didn’t want to sound like.

They lost all their money

After our first album as Blur, our then manager took all our money. We didn’t have two beans to rub together.

We paid our debts off by signing a merch deal to do a two-year tour of America. At the end of the tour, we came back to the UK and realised what we loved about it. It led us to start writing songs about the idea of ‘Englishness’.

We didn’t create Britpop. We didn’t think we were part of a scene ... if we did, we would have tried to smash it down.

In the battle of Blur and Oasis both were winners

At the time, we’d say something immensely cruel about a band in the press, they’d wince and hide in the corner. But Oasis wouldn’t have it.

We won the battle, they won the war. It stapled us to the hip for a while but it made us both mainstream. Chart music shifted to accommodate us and it changed history.

Creativity comes from limitations being put in place…

During the latter stages of Blur I had to think more about how to be creative. So for one record, I decided I wasn’t going to use a drum kit. It made me think about my part in the band and what I played. These constraints can make you very creative.

The next Blur reunion? There’s nothing in the diary. We’re waiting for an interesting idea. But I’m sure we’ll be back...

by Jim Ottewill
October 23, 2018
ICMP Life
Back to Blog Home