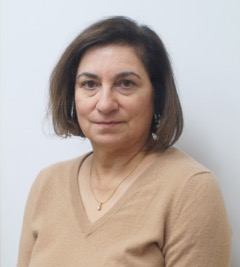 Syra is a British citizen of Pakistani extraction who moved to the UK in 2009 to avail herself of an investment opportunity with ICMP and a position as Executive Director in the company. Her participation has helped grow the business threefold in the 10 years since she joined it.

Syra qualified with BA Combined Hons (1976) and Mphil (1981) degrees in Social Anthropology from SOAS, University of London with a specialisation in Education and Socialisation. She then returned to Pakistan where she worked primarily as a journalist and later, as a Creative Director in Advertising with consultancies at the Sind Department of Culture and the UNFPA (United Nations Fund for Population Activities). She also lectured part time at local colleges on Current Affairs.

It was her passion for popular music that first brought Syra to ICMP as a student taking courses in Guitar, Songwriting and Vocals. During her stint as Executive Director between 2009 and 2015, Syra’s training in journalism and anthropology meant that her approach to problem-solving, based on rigorous empiricism and insight gained through wide reading and research, added an extra dimension to strategic planning at ICMP.

Now semi-retired, Syra manages her property and investment portfolios which leaves her plenty of time pursue personal interests: cricket (as a spectator), golf and bridge. And also to enjoy the cultural delights of living in London, especially theatre and popular music.