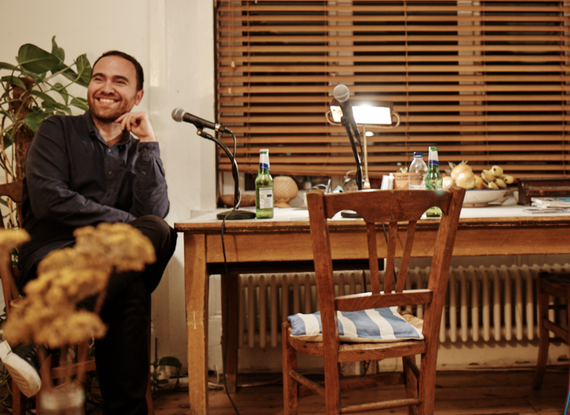 Toby L, Transgressive Records founder (pictured) and David Manders from Liquid Management are among the leading industry experts visiting ICMP to speak at our Careers Day.

Taking place on 16th November, the event will be an afternoon of interactive panels providing attendees with insight and advice from professionals working across the music business.

Please note, this is an exclusive event for current students and alumni. The sessions will focus on and feature the following:

Pete Simmons - A&R Manager, Universal Publishing
As A&R Manager at Universal Publishing, Pete is currently working with acts including Rex Orange County, Tom Misch, Matt Maltese and Sigala. He has previously worked at BBC Radio 1 & 1Xtra across various shows including Charlie Sloth, Zane Lowe and Nick Grimshaw. He signed Grammy Nominated ‘Rinse and Repeat’ by Riton & Kah-Lo in 2016 and was included on Music Week's '30 Under 30' in the same year.

Martin Dell - A&R Manager, Columbia
Currently in the A&R team at Columbia Records, Martin previously worked as part of the A&R team at Syco Music, working very closely with acts including Ady Suleiman as well as consulting for various companies.

Alex Eden-Smith - Head of Marketing, Columbia
In his current role at Columbia, Alex has worked with George Ezra, Daft Punk, Bob Dylan, Foo Fighters, Declan McKenna among many others. Since starting in the music industry with Virgin Records/EMI, Alex also worked at Parlophone with acts including Coldplay, Tinie Tempah, Gorillaz, Blur and Danger Mouse

Toby L - Founder, Transgressive Records
In 2004 Toby co-founded the independent record label Transgressive Records with his new partner in crime, Tim Dellow. The pair went on to work with and sign successful acts such as Foals, At The Drive-In, Two Door Cinema Club, Graham Coxon, Regina Spektor and The Shins. Toby found the Rockfeedback.com website in 2000, a music blog which expanded into a TV series and live events while he’s also behind music media company LoveLive. The last two years have seen Transgressive’s first Grammy win (Flume - ‘Skin’), the launch of a new major festival in Margate (By The Sea Festival), plus Toby being named A&R of the Year at the Music Producer Guild Awards (2017).

Phil Loutsis - Director of Label Management, AWAL
Phil is the Director of the Label Management team at AWAL where he has been since 2011. Moving down to London two years ago to help finish the integration with Kobalt was a great opportunity. Since then he has been looking after the priority projects for AWAL and developing the team to manage the growing roster globally

Maz Tappuni - Promoter, Communion Records
Maz Tappuni heads up Communion Presents, which is the live arm of Communion. In the past five years, Communion has put out records by Catfish and the Bottlemen, Michael Kiwanuka and Daughter. Communion also put on around 250 shows a year and the live roster includes the likes of George Ezra, James Bay and Ben Howard. Maz also hosts 'Communion Presents’, a new music show on Radio X, every Sunday from 10pm.

David Manders - Manager, Liquid Management
David is the owner and founder of Liquid Management, an artist management company with 25 years experience of handling artists through all levels of the industry; from major label acts to early level artists and bands. Acts they are currently working with include Public Service Broadcasting and Tara Priya. David has previously worked for Ricochet Management and with Dazed and Confused Magazine.

Jess Kinn - Agent, Coda
Jess Kinn started working in PR before starting at music booking agency The Leighton Pope Organisation with acts such as Michael Buble and Bryan Adams. After this, she joined Coda Agency representing acts such as The Age of L.U.N.A, Bree Runway, Lowes whilst also working across a larger roster of acts that include Shawn Mendes, Halsey, Faithless, Milky Chance, Zak Abel and Billie Marten

Jess Partridge - Founder, London in Stereo
Founder and editor of London in Stereo magazine for the past five years, Jess has balanced the day to day running of the publication alongside managing indie label Fierce Panda and heading up marketing for Vice venues. She also currently manages PRS Foundation's Keychange fund, an exciting new European project investing in the talent of female musicians and innovators.

Jason Carter - Founder, Get On Music
Jason Carter is currently the head of his own music consultancy, GetOnMusic. He previously spent the best part of 20 years working with the BBC, initially as head of live music before helping launch and guide BBC Music Introducing. His work with the platform was instrumental in boosting the careers of artists such as Florence and the Machine, Catfish & The Bottlemen, Slaves, alt-j and many more. Jason was also a key figure in the development of BBC Music. More recently, he headed up Amazon’s Prime Live Events division before moving on to set up his own music business.

Barney Ashworth is a Musical Director, Composer, Arranger and Orchestrator.  He has worked in Musical Theatre on productions such as Mrs Henderson Presents, Sunny Afternoon, Grease, CATS, The Lion King, Blood Brothers, Never Forget and SHOUT. Also on TV and Radio for various channels domestically and internationally including the BBC, ITV, Channel 4 and FIVE.

Dave Phillips is an entrepreneur, musician and recording engineer. His experience has led him to perform in various bands and groups as well as seeing him immersed in the business side of the sector including a UK-wide music school franchise as well as managing entertainment for UK clubs and venues.

If you're an ICMP student or graduate keep in touch, let us know what you're up to and how things are going by emailing thehub@icmp.ac.uk. And don't forget, our careers and industry liaison team at The Hub continue to be available to you after graduation, providing advice and connections to help further your career.

If you're interested in taking your music industry career to the next level, then get in touch with our Admissions Team. Call them on 020 7328 0222 or email enquiries@icmp.ac.uk.