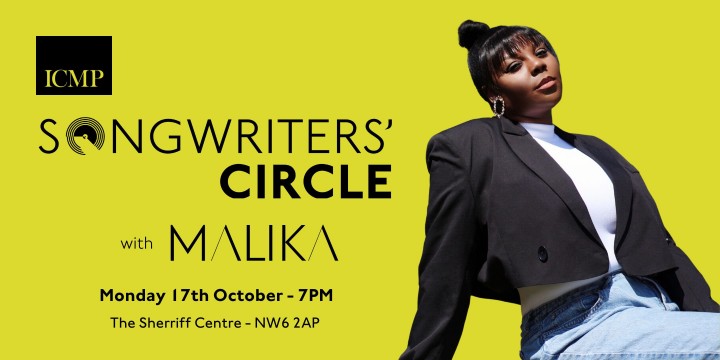 Open to all ICMP students, the Songwriters' Circle attracts musicians, music lovers and industry alike. You won't find a more unique, welcoming and intimate event whilst studying with us at ICMP. Our Black History Month special will feature Award-Winning British Singer, Songwriter Malika.

Music has been a fundamental part of her identity which allowed Malika to find her own success in her teens. Malika describes her sound as UK Soul, from which her soulful vocals, pop choruses, hip-hop drums and choir influences bleed out. Coming from a strong musical background, Malika’s father founded London’s first pirate radio station Time Radio, which introduced her to the melting pot of sounds that have come from the UK over the decades. She honed her craft among UK Music legends of the Lovers Rock era growing up around family friends Janet Kay and Carol Thompson. Being influenced by such deep roots of Music, Malika had significant successes in music early on in her career, particularly with Crazy Cousinz when she asked them to remix the original RnB song ‘Go.’

Malika also co-wrote and featured on Nathan Dawe’s hits ‘Cheatin’ & ‘Flowers’ and built up a respected reputation as a songwriter and vocalist, having worked with Snakehips, Rita Ora, SG Lewis, Basement Jaxx, Ella Eyre, Jess Glynne and many more. Now she is returning back to the sound that made her: UK Soul. Malika describes her forthcoming music as songs for people like her, for people who have at times been lost and the journey it takes to find yourself. Encouraging listeners to have honest conversations with themselves and others. She cites her growth from being a girl into womanhood as a major influence on her writing, particularly as this new chapter in her music sees her put the experiences of women at the centre.

This event will take place at the Sherriff Centre, just a 5 minute walk away from ICMP, where you can attend in person, or you can watch the stream of this special event on our YouTube channel.