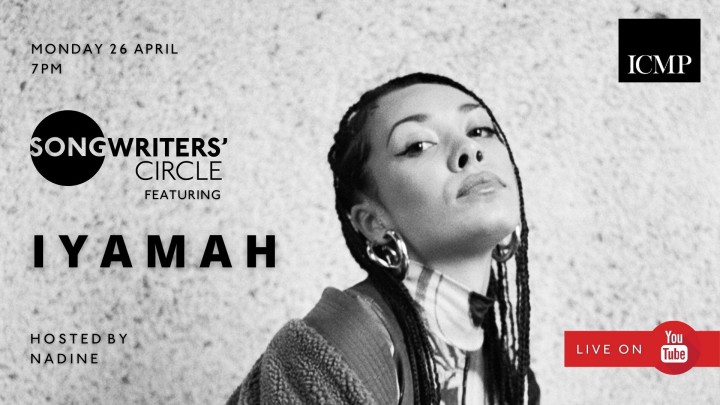 This month's Songwriters' Circle will see up-and-coming ICMP talent performing their original material alongside special guest Iyamah.
The audience will get an exclusive chance to hear songs stripped back, sung by the writers themselves as well as new material from the most talented songwriting students in the UK.

Open to all, our Songwriters' Circle attracts musicians, music lovers, and industry alike. This is a unique blend of people coming together for one evening along with stunning songs and the stories around them, this is an experience you won't forget.

About Iyamah
Iyamah grew up on the sounds of African drumming and reggae music in the seaside town of Brighton. Immersed in the festival culture, Iyamah was raised by her artistic mother, who encouraged her with a creative upbringing. She started singing from an early age, imitating soul singers like Alicia Keys and Adele from the radio. At 13, she picked up a piano and started writing songs, but kept them for her own expression, just like a diary. Iyamah was inspired by empowering female artists and since moving to London at 19, developed her taste for Neo-Soul and hip hop, under the likes of Lauryn Hill and Erykah Badu.

Since finishing ICMP in 2018 she has released two full projects called 'Truth' and received big support from radio 1xtra. Iyamah has toured with Mahalia and Masego and has played two sold-out headline shows with another one coming up at the Jazz Cafe in May.
Her next project is called Tough Love and will be released on May 7th.

The event will be hosted by ICMP tutor Nadine.