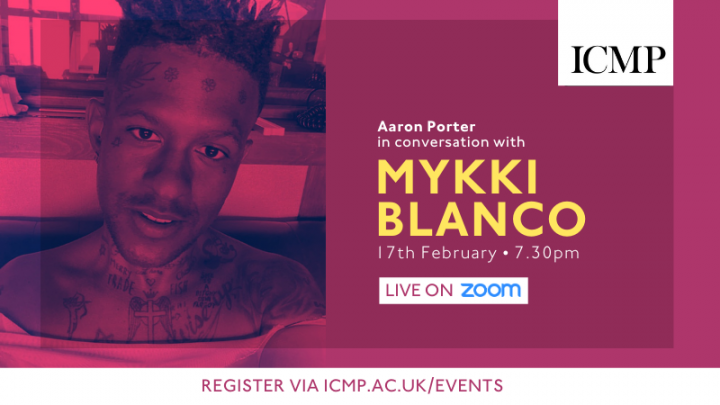 Mykki Blanco, the artist persona and stage name of Michael David Quattlebaum Jr., is an internationally renowned musician, performing artist, and LGBTQ+ activist. While their self-titled debut Mykki album wasn't released until 2016, they were the creative force behind mixtapes such as Cosmic Angel (2012) and Gay Dog Food (2013); these groundbreaking mixtapes along with Blanoc’s other early releases defined the “queer rap” genre and paved the way for the possibility other non-heteronormative and gender-nonconfirming artists to break through.

Blanco has made a significant mark in media and pop culture through their performances in other music videos and short film content, such as their starring role in Madonna’s “Dark Ballet” music video and their stunning reading of Zoe Leonard’s “I Want A Dyke For President” poem.

The multi-faceted star continues to crossover from the underground having toured with the likes of Bjork, Major Lazer, and Death Grips, while working with such diverse musicians as Kanye West, Devendra Banhart, Amnesia Scanner, Charli XCX, Kathleen Hanna, and Woodkid. Mykki Blanco remains a creative polymath whose journey is as exciting to watch as it is to listen to.

Also featured during this event is Aaron Porter

British singer and songwriter Aaron Porter has been steadily building a fanbase with his sensitive but direct lyricism, natural charisma and silky, arresting vocals. Aaron was raised solely by his mum, still one of his closest friends and biggest influences. Together they’d sing along to Toni Braxton and Whitney Houston, unwittingly developing his passion for music.

He was accepted to The BRIT School to study musical theatre for his A Levels. Moving to London, Aaron discovered a second family of young, gay creatives with whom he grew his own community, dancing for alternative club nights with huge DJs and exploring the burgeoning fashion and music scenes. He released his debut EP "Expectations" in 2019, a celebratory and unapologetic statement of intent which picked up support from the likes of The Line of Best Fit, BBC Introducing, Billboard, Clash, Notion, Gay Times and Attitude, and has amassed over half a million streams to date.