In The Mix With... Ramera Abraham

Home » Events » In The Mix With... Ramera Abraham 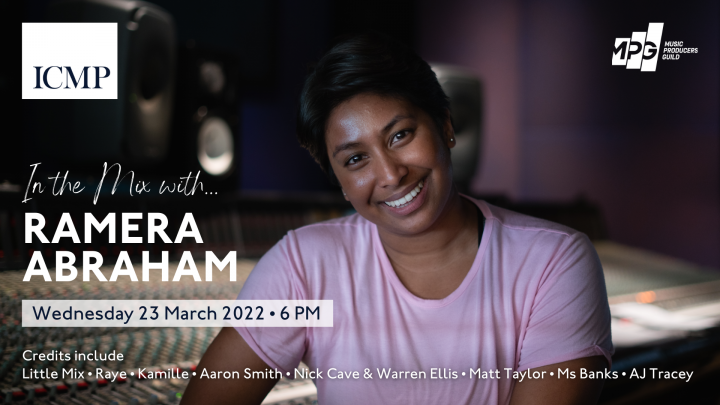 Our 'In the Mix...' series sees the music industry's best producers and audio engineers discuss their careers and share advice for anyone looking to launch successful studio careers.

Taking place on the 23rd of March, our next session of the year will feature the amazing vocal producer and sound engineer Ramera Abraham.

Ramera started her career earning a residency opportunity as one of three sound engineers with Spotify at their Secret Genius studio in London. At Spotify Secret Genius, she assisted artists and producers during writing sessions and picked up how to run recording sessions efficiently and maintain relationships with clients.As the majority of these sessions were vocal-focused, she was able to immerse herself in vocal production.

After the Spotify residency had solidified her love for vocal production and engineering, she started as a Runner, then as an Assistant Engineer at Metropolis Studios to strengthen more of her technical knowledge. At Metropolis, she had the pleasure of working with a whole host of artists, including Little Mix, Elton John, Sam Fender, Inflo, Adele, and Nick Cave.

Now a freelance vocal producer and engineer, she is working with upcoming pop, R&B, and alternative artists, primarily for the label and distribution company, Platoon. She has been creating vocal arrangements and writing harmonies from a young age, and has been in the professional recording industry for nearly 5 years.

She has worked across other studios such as SARM and Electric Lady Studios, and last year she was also included in SheSaid.So’s Alternative Power 100 List.

Students will also have the chance to submit their music in advance of the event and receive feedback on their work from Ramera.