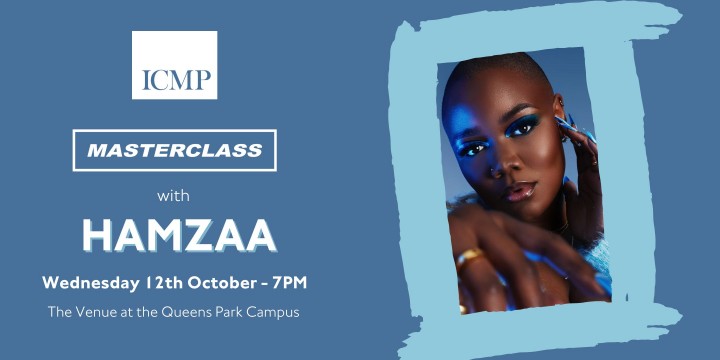 H﻿amzaa will join us for an exciting Masterclass on the 12th of October!

23-year-old, east-London singer, and songwriter known as Hamzaa – is a musical force to be reckoned with. Describing her sound as “pop-soul-alternative,” Hamzaa gained notoriety on her stunning 2018 EP, First Signs Of Me, which was described by The Native Mag as a ‘6-track EP that highlights music’s ability to help us feel better’, and since has used her unrivalled lyricism, vulnerability, and vocal dexterity to impress her 340K+ monthly Spotify listeners, musical tastemakers, and peers alike.

Rising steadily into the UKs musical landscape, following her 2019 breakout performance on “Later...With Jools Holland”, four sold-out headline shows at London’s St Pancras Old Church, Omeara (the shows received a four-star review in the Evening Standard, who compared her to a 19-era Adele) and Scala; and collaborations with artists such as Wretch 32, Dave, Rudimental, Tiwa Savage, Ghetts, Stormzy and Miraa May – Hamzaa has garnered fans in the form of artists such as Anne-Marie and Jorja Smith, to name a few, but her renown doesn’t stop there.

As a supporting act for Ray BLK, and Mahalia on her 2019 ‘Love and Compromise’ tour; a Latitude Festival performance alongside Rudimental; and being dubbed as “the real deal” by The Line Of Best Fit, Hamzaa has received radio support across tastemaker platforms like Repezent, national stations like BBC Radio 1Xtra, and Julie Adenuga’s Beats1 show, as well as publications such as The Evening Standard & Wonderland Magazine.

B﻿ook your ticket now as this is an event you don't want to miss!