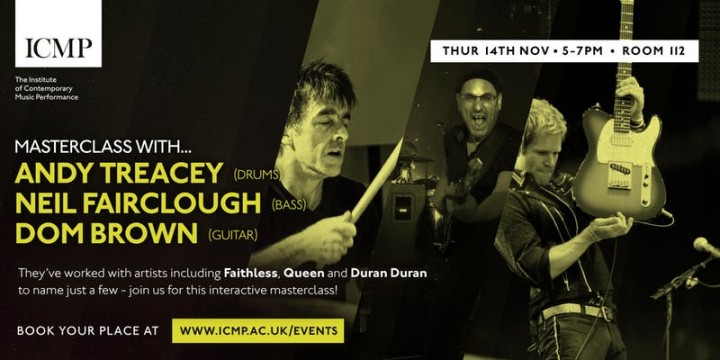 Throughout their careers our special guests have worked with a wide range of artists:

Andy Treacey has been the drummer and MD for British electronica band Faithless for the last 20 years. In between their tours he has been working with a wide range of artists including Groove Armada, Dido and Robbie Williams as well as playing for 'The Lion King' at West End. Last year Andy played some shows with the Dire Straits and toured with Tom Robinson.

Neil Fairclough has spent the last 7 years touring and recording with Queen and Adam Lambert. He worked with artists such as Mika or Heuy Lewis in the past and recently toured the UK and Europe with Elio Pace's 'The Billy Joel Songbook'.

Dom Brown is the lead guitarist of Duran Duran since joining the band in 2006. As a session musician he worked with artists such as Justin Timberlake, Liam Gallagher and performed with Elton John and Cristina Aguilera. Dom has further collaborated with top producers including Mark Ronson and Timbaland.

This interactive masterclass will encourage the students to join the musicians on the songs 'Fire on the Bayou' by The Meters and 'Stop on by' by Rufus and Chaka Khan.