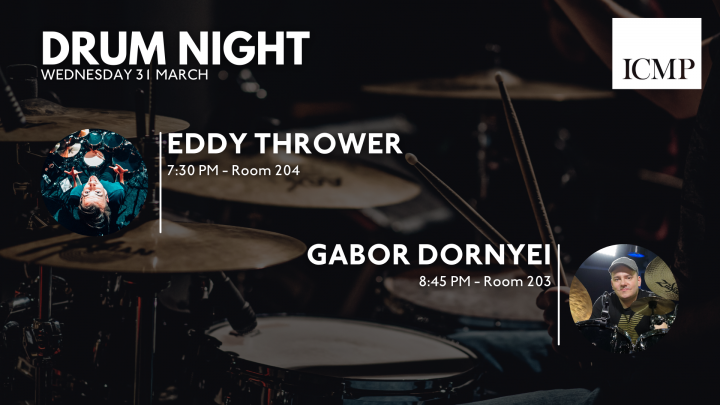 We are really excited to have the fantastic Eddy Thrower and the wonderful Gabor Dornyei as part of ICMP's Drum Night on the 31st of March.

Eddy is probably best known as drummer of top UK rock band LOWER THAN ATLANTIS, as well as recently touring with Dua Lipa and Busted. Prior to this and even still, he is also one of the UK’s busiest session players, working with artists such as, One Direction, 5 seconds of summer and Linkin Park, as well as playing on records for movies and TV adverts. Eddy has also toured and performed with artists such as Blink 182, You Me At Six and A Day to Remember.

His band, Lower Than Atlantis, is always a favourite on the UK festival circuit and they have played; Reading and Leeds an unprecedented four times, Download Festival twice, Boardmasters twice, Rock Am Ring and Graspop to name but a few.

Gabor Dornyei is one of the most in demand and successful Solo Artists, Session Drummers, and Drum Clinicians/Educators of his generation who emerged out of Europe in recent years.

Gabor’s diverse talent led him to perform all around the Globe, including USA, Asia, Africa, all over Europe & UK, Scandinavia and countless other places.

This outstanding drummer performed at the London Jazz Festival, Sziget Festival, Glastonbury Festival, Love Supreme, London Latin Jazz Festival amongst hundreds of others and participated in the London production of MJ Thriller Live World Tour for three consecutive years. The UK resident drummer and band leader has been listed and shared the stage with some of the World’s leading drummers, such as Billy Cobham and Gavin Harrison at Dresdner Drum Festival, Steve Smith and Ian Paice at Adams Drum Show in the Netherlands, with Steve Gadd, Marvin Smitty Smith and Terry Bozzio at Opole Drum Fest in Poland, Peter Erskine, Gregg Bisonette and Thomas Pridgen at London Drum Show, Chris Coleman in Moscow, Jojo Mayer in Hungary and at many-many other major international Drum Shows.

We're really looking forward to seeing you there!