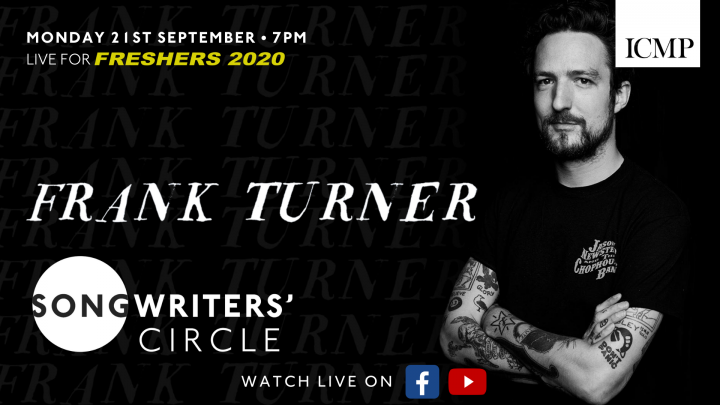 We're kicking off another year of Songwriters' Circle with a special round including the performance of Award Winning Singer/Songwriter Frank Turner.

The audience gets an exclusive listen to songs stripped back, sung by the writers themselves as well as new material from the most talented, up and coming songwriting students in the UK.
Open to all, the Songwriters' Circle attracts musicians, music lovers and industry alike. This is a unique blend of people coming together for one evening along with stunning songs and the stories around them, this is an experience you won't forget.

Over the course of an astonishing career spanning 20 years + and counting - during which he has to date sold in excess 1 million records and played to over 2 million people - Frank Turner’s popularity has grown with his artistry. From the ferocious, sweaty box venues of rock band Million Dead and starting from scratch with an acoustic guitar in pubs and bedrooms in 2005, to his name now routinely appearing in the largest font on ticket stubs that permit entry to such venues as Wembley Arena, The O2 or the Royal Albert Hall.

2019 saw the release of ‘No Man’s Land’ - Turner’s eighth solo record and his fourth consecutive UK Top Three album release. Produced by MPG Producer of The Year Catherine Marks (Foals, The Big Moon), it is an esoteric concept album driven by the extraordinary lives & legacies of 13 fascinating women, previously overlooked by history.

Following his first global tour, which saw him play over 100 headline shows across 4 continents, Frank rounded out 2019 with a UK tour putting a unique twist on his formidable live set up. Solo sets from Frank were followed by an unplugged band performance in seated venues, culminating in two sold-out nights at London’s Alexandra Palace Theatre.

He has carved out a career as a hard-touring, punk-folk troubadour with a diehard fanbase drawn to a singer-songwriter who refuses to play the game and does things on his own terms.

The Songwriters' Circle will include performances by students from all Songwriting courses and will be hosted by our 'Head of Songwriting' Sophie Daniels.