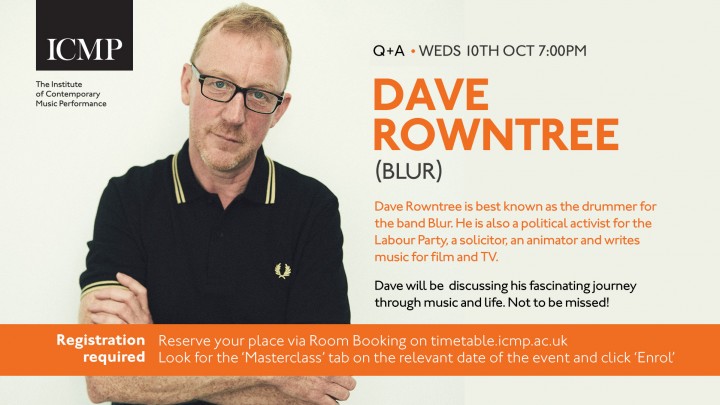 ICMP is delighted to welcome Dave Rowntree, drummer for British legends Blur, for a masterclass.

Taking place on Wednesday 10th October at ICMP, the event will see Dave speak to ICMP students as part of a Q&A.

He will discuss his music career, advice on how to succeed in the music industry alongside his other numerous achievements.

Students can sign-up for this event via CELCAT. Look for the 'Masterclass' tab on the relevant date of the event and click 'Enrol'.

Dave is much loved as the drummer of iconic British band Blur. Outside of the group, he is a Labour councillor, solicitor, animator and creates music for both TV and film.

He played in various bands with childhood friend Graham Coxon, before hooking up with Damon Albarn and later Alex James to form the band Seymour. They later became Blur and the rest is history.

Outside of Blur, Dave has been a DJ on XFM where he debuted tracks on the radio by artists such as Rat Boy, Pretty Vicious, The Big Moon and Aurora. He also co-founded The Featured Artists Coalition and Star Boot Sale, a charitable project where musicians donate their possessions to raise money for refugees.

Visit davidrowntree.org to find out more.