Conny Plank: The Potential Of Noise: Screening And Director's Talk 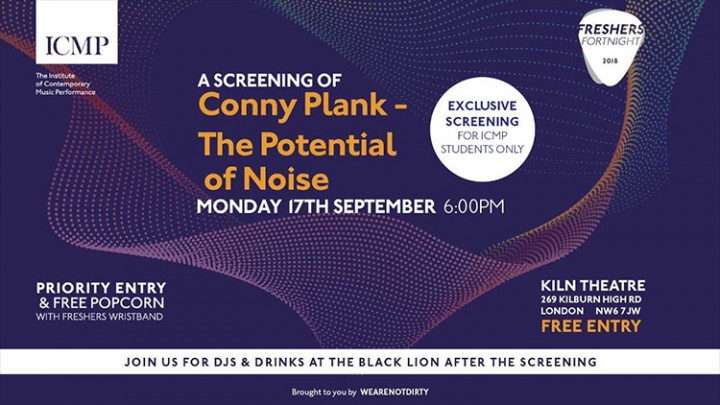 'Conny Plank: The Potential of Noise' is a documentary exploring the life and work of the legendary electronic and krautrock producer, Conny Plank.

The film is a collaborative effort co-directed by Reto Caduff and Plank’s son Stephan. It gives an unusually intimate and emotional view of the artists who worked with Plank and the many musical traces he left behind.

Entry: Free for all students. You receive priority entry and free popcorn with an ICMP Freshers Wristband.

What is the film about?

Conny Plank is remembered as being one of the most innovative sound experimentalists, producing recordings that revolutionised music.

He was a producer, sound engineer and musician covering a wide range of genres including progressive, avant-garde, electronic music and krautrock. Artists such as Kraftwerk, David Bowie, Brian Eno, Gianna Nannini, Ultravox and the Eurythmics queued to record in Conny Plank's studio, a farmhouse near Cologne.

Dying at only 47, Plank left behind a wife, actress Christa Fast and a 13-year-old-son, Stephan. Now, 20 years on, Stephan sets out to find his father with the film taking a journey through music history as well as around the world, to give an unusually intimate and emotional view of the much in-demand producer.

Following the film there will be a short Q&A with the film’s producer and director and a gathering at the Black Lion on Kilburn High Road.