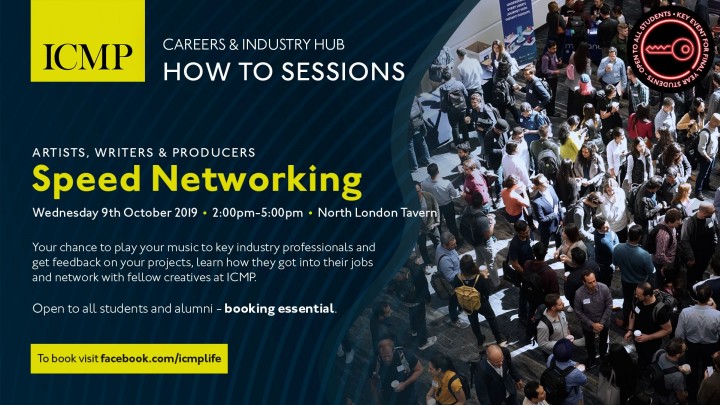 This is your chance to play your music to key industry professionals and get feedback on your projects, learn how they got into their jobs and network with fellow creatives at ICMP.

Further guests will be announced on FB in the run-up to the event, here's who we've announced so far:

In the last year she has signed Cavetown, HYYTS and Kwassa, alongside writing for Line Of Best Fit and The Most Radicalist, and won the 2017 MPA’s Richard Toeman Scholarship.

She set up and is Mentorship Director for She.Grows by SheSaidSo, a mentoring project for women in the music industry, which so far has provided services for over 140 executives, and been franchised by the Musicians Union & Amsterdam Dance Event.

Peter Thomsen - Promoter, Kilimanjaro Live
Peter is a promoter at Kilimanjaro is one of the biggest national promoters in the UK looking after a wide array of artists from Ed Sheeran and Marilyn Manson to Parcels, Cavetown, and more. Originally from Denmark, Peter started off as a drummer in different bands before moving to London to study at University of Westminster. On the side of his studies at the BA Commercial Music course, he started putting on his own East London showcase nights, presenting the likes of Jade Bird, Nilufer Yanya, Scott Quinn, and Mathilda Homer in intimate settings before first landing an internship at Kilimanjaro and later joining officially as their new music promoter. Now, he works with acts such as Omar Apollo, Highasakite, Dutchkid, Talulah Ruby, and Sunset Rollercoaster, always on the lookout for good new gigs and good new, creative people.

Ellis Mizen - A&R, Good Soldier Songs
Ellis works for publishing company and record label Good Soldier Songs (The 1975, Freya Ridings, Biffy Clyro, Gavin James). They work with a host of excellent writers and producers at the forefront of their respective genres. Since starting as a scout, Ellis has signed two bands, Larkins and Talmont, as well as managing upcoming writers Matt Rist. Previous to this, he undertook internships with BMG and Fiction Records.

This event is an incredible opportunity to meet all sorts of artists, writers, producers and industry pros - book your place today.