Home » Blog Articles » Ralph Salmins: How to be a session drummer

Ralph Salmins: How to be a session drummer

From Van Morrison to the London Olympics 2012, Ralph Salmins is one of the UK's most in-demand session drummers. We learn his tips for success... 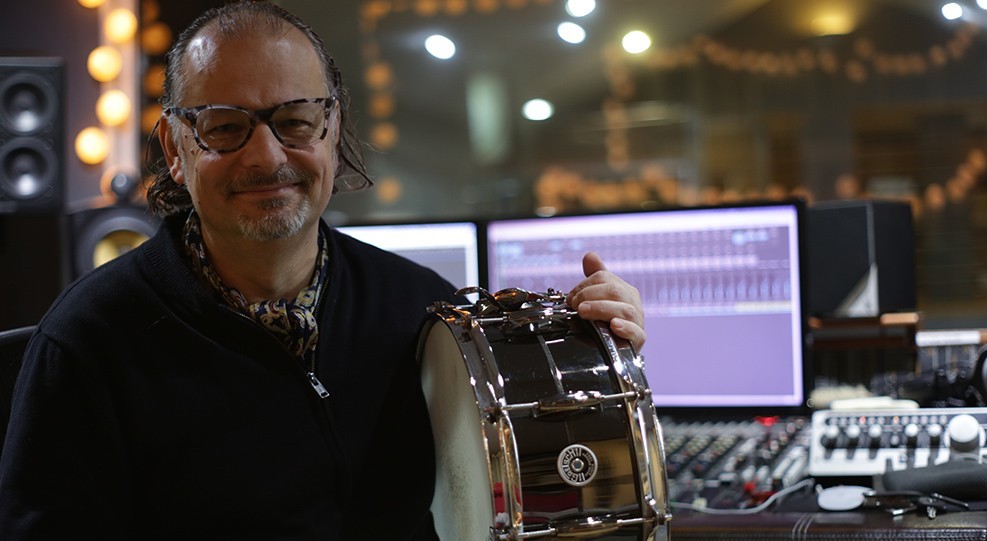 As a London session drummer, Ralph Salmins is one of the UK's most versatile and in-demand players.

From working as a music consultant for the London Olympics 2012 to session work with the likes of Van Morrison and Paul McCartney, Ralph's playing is legendary. When he's not on tour with The Waterboys, his playing has adorned with the soundtracks to many of Hollywood's biggest films including 'Harry Potter: The Prisoner of Askhaban', 'Tomorrow Never Dies' and 'Charlie and The Chocolate Factory'.

On his recent visit to ICMP to speak to our BMus students, we caught up with Ralph to learn more about his tips for success as a session player...

How did you start your career in the music industry?

I played in a kid’s rehearsal band when I was in my teens in Islington. We used to rehearse big band music – Glenn Miller, Count Basie – I picked up some ability from that. At the same time, I was listening to a lot of other styles of music.

I played with some semi-professional bands and I happened to be playing a pub gig with my jazz group – another band was playing and one band member was the son of Ken Mackintosh. He said Ken was there and he wanted to speak with me. Ken asked me to audition for his band. I went along, sat in and ended up getting the gig at the age of 16. That was my first break into the industry and led to lots of gigs – functions, on cruises - it taught me a lot about different styles and gigging and it was just by chance that I so happened to be playing in a pub when I met Ken. It was a very lucky break and made a big difference to me.

You’ve worked with some big industry names: Aretha Franklin, Elton John, Paul McCartney: what are your favourite memories of these experiences?

They were all studio recordings, the most recent being for Aretha Franklin and her record with Royal Philharmonic [the ‘Brand New Me’ album]. We re-recorded the rhythm tracks for that.

I remember playing the music, having immense respect for it and trying to assimilate the drumming of Roger Hawkins from the Muscle Shoals rhythm section. It was an honour and a great learning experience.

I’m playing music for a recording a lot of the time in these situations. So I’m always trying to do the best job I can for the music.

How do you think musicians can sustain themselves in their careers?

Having a lot of skills is important if you want to earn a living from music. Can you read? Are you reliable? Can you learn or at least be familiar enough with 24 songs if asked to play them within 48 hours? It has happened to me."

You need to be able to do that in the time frame. This is where the skill of music reading will get you through.

Playing lots of styles, understanding about producing and being in the studio – the more skills, the more valuable and employable you’ll be – learn how to record yourselves properly, use Logic, use Protools, learn to read and play in different styles. All these things feed into your career.

How do you get the big gigs?

On a basic level, when you walk into a room with an artist, they ask themselves whether they like you or not. If it’s yes, then you’ll be asked back – if not, then it’ll be a no. So I and try and make sure I provide them with what they are looking for.

Music artists and singer songwriters are looking for a drummer who is sensitive to the needs of the music, knows the style, will learn the music and play it properly, will understand the dynamics, play great time and get a great sound. People value all this when they look to employ you. Can you play to click? It’s another skill which is essential both on stage and in the studio.

Being someone who can get on with people on tour is important too. You’re spending a lot of time with people so being considerate and having a positive work attitude is important.

You’ve toured extensively with The Waterboys over the years. Have you any advice for those going on tour for the first time?

I never toured much when I was young. The first band I went on tour with was Everything But The Girl in the mid-nineties. Then I played with Van Morrison. But it was the Waterboys when I started doing heavy road work.

The most important thing on tour is keeping yourself in the zone - stay well, stay healthy and keep on top of the gig. That involves less partying than you would think."

Most of what you do is travelling and playing so staying in shape is crucial both physically and mentally. It can be exhausting if you don’t look after yourself. Feeling great will help give you the edge and enable you to perform as well as you can.

Staying inspired when playing the same music all the time can also be difficult. Things might be getting on top of you but you need to try and think your way through it. You’re in a professional working environment, so be considerate, get on with people. I’ve become well practiced at packing. There’s a trick to rolling up underwear!

What’s your top piece of advice for anyone starting out in the music industry?

Know your music. You need to get into all different types and styles of music and immerse yourself in them. A broad knowledge will carry you a long way in your music career.

Watch Ralph performing with The Waterboys below:

Visit ralphsalmins.com to find out more.

Study Drums in London with ICMP

If you're interested in developing your drumming, learning from our regular industry guests and collaborating within the vibrant ICMP creative community, then speak to our Admissions Team. They're on hand to help you find the right course that matches your ability and aspirations.

by Jim Ottewill
January 15, 2019
In the studio
Back to Blog Home